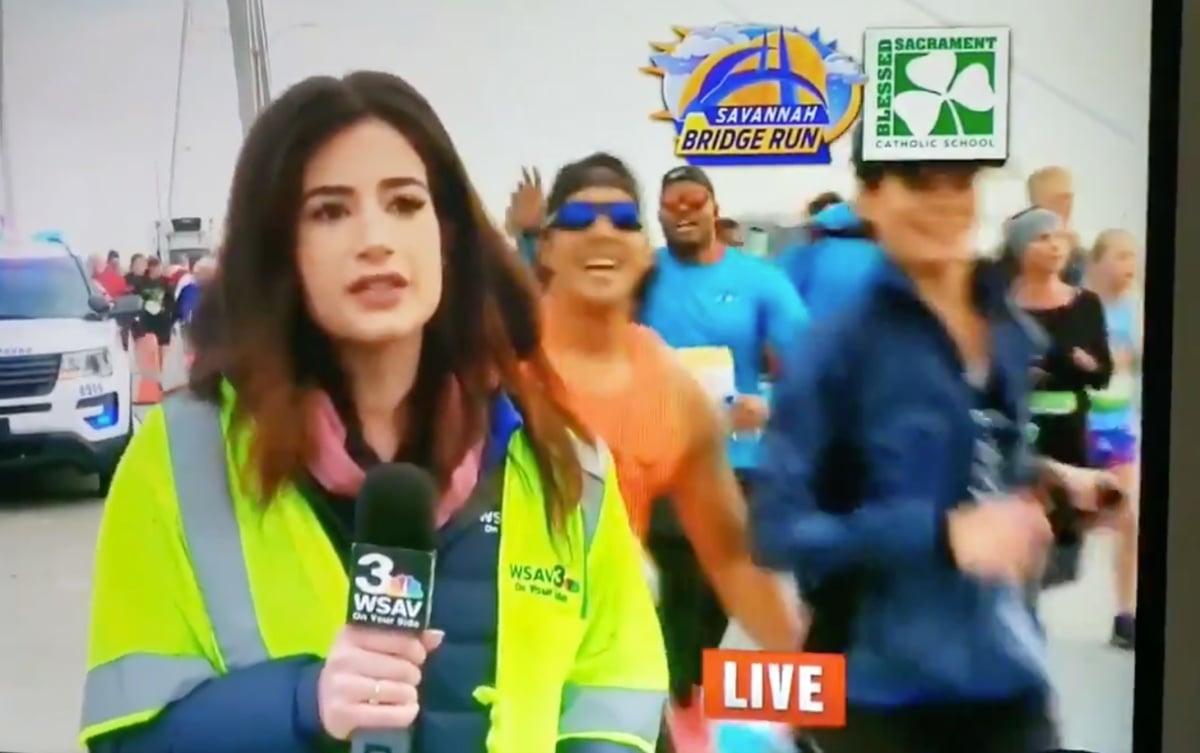 We reported earlier this week on the on-air assault of reporter Alex Bozarjian, how was slapped on the rear by a runner while she was doing live coverage of a 10K race in Georgia, and now we have an update on the case involving her assailant, youth minister Tommy Callaway.

According to Deadline, Bozarjian filled a sexual battery complaint with the Savannah police department on Wednesday. She’s represented by celebrity lawyer, Gloria Allred who has stated: “Alex is looking for justice in this case.”

Well, she may get it, as Callaway was arrested on Friday and formally charged with misdemeanor sexual battery in Savannah court. Callaway slapped Bozarjian’s backside and, according to her complaint, also grabbed her buttock at the same time. The incident was caught on camera with Bozarjian staring after Callaway in horror.

Bozarjian told CBS this morning that she sought charges because it’s important for men to know “It’s not OK to help yourself to a woman’s body just because you feel like it. It’s not playful. He hurt me, both physically and emotionally.”

“It’s not okay to help yourself to a woman’s body just because you feel like it… in order to make any kind of change, you have to be a little bit drastic. And you have to… chip away at this toxic culture that permeates our society.” — @WSAVAlexB pic.twitter.com/tYsvu0uFiW

Callaway for his part has been making rounds on the news and social media trying to do damage control and excuse himself by telling Inside Edition he was “caught in the moment.” That excuse doesn’t fly, and Bozarjian was right to continue with charges.

A misdemeanor conviction in Georgia can carry jail time up to 12 months and a fine of $5,000. Though it is highly unlikely that Callaway will actually do jail time if convicted, it’s still important that he’s being charged and serving as an example that this kind of assault is not acceptable from anyone, heat of the moment or no.

Following the arrest, Allred released the following statement on behalf of Bozarjian on Bozarjian’s twitter:

Alex Bozarjian is glad that law enforcement is taking this matter seriously. She feels that a reporter shoule be able to do her job without being assaulted. Alex wants to thank the members of the public who have reached out to her to offer support. If this case goes to trial she will be a witness. For that reason, she will have no further comment until the case concludes, but she does hope that there will be a just result.

We agree and hope that Bozarjian will be able to move on from this soon and that Callaway will face a fair and just result in the case. But more importantly, we hope that there are men out there who have learned from this.