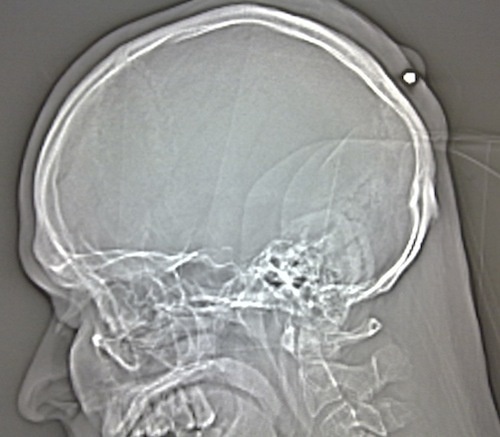 A man who was shot in the back of the head with a .22 caliber bullet five years ago recently just discovered the fact during a check-up with his doctor: He found a lump in the back of his head which, upon examination by x-ray (above), turned out to be the bullet.

He mostly likely didn’t discover what had happened because he was drunk at the time: The AP reports that it happened “as he was out in the street partying and drunk on New Year’s Eve five years ago” in Herne, Germany. But it’s possible the shooter didn’t have had ill intent, but may have just been a fellow partying carouser: “Police say it may have been a stray bullet fired by a reveler in celebration.”

Man Shot in the HeadX-Rays