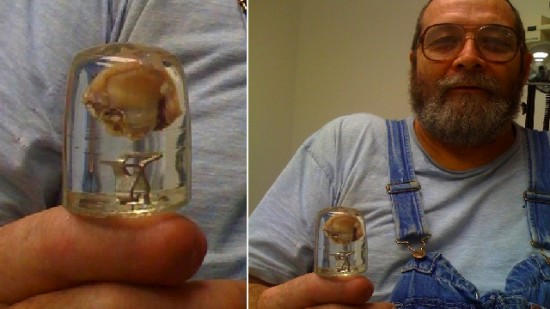 John Baker runs Baker’s Junction Railroad Museum in Smithville, Indiana. The museum, which features a haunted house that takes place in old train cars, actually sounds pretty awesome, but apparently, Baker is in need of money to fix the place up. That being the case, he’s doing what any sane person would do: He’s selling his thumb. Relax, it got severed before he decided to sell it.

Baker says he’d been holding a saw above his head when his bad leg (this guy has it rough) gave out and his thumb was severed in the fall. Thinking quickly, he threw the thumb into a glass of ice and caught a ride to the nearest hospital, 60 miles away. As it turns out, the thumb was too mangled to be reattached, so Baker had it mummified, set in clear plastic, and put on a keychain. He hopes to sell the thumb for enough to pay for the museum’s new metal roof. Where he’ll find a buyer willing to pay top dollar, I can’t imagine.

Quote from Baker via io9:

I was using a saw over my head but I only have one good leg & it has a bad knee & it gave out & I fell down & the saw jumped out & cut my finger off.

I dumped out a coke & put my finger in the glass of ice & my friend James drove me to the VA hospital 60 miles [away] but the saw mangled my finger up [too] bad to be put back on so I put it back into [my] pocket & brought it home.

I had my finger mummified & made [into] a key chain on a stainless [steel] chain set in clear plastic.

I am selling it to pay for a new metal roof for the two train stations at Bakers Junction Railroad Museum at Smithville Indiana & they need a new roof badly.