Interview: Director Henry Hobson on Maggie and Tackling Euthanasia and Fear of Illness Through Zombies 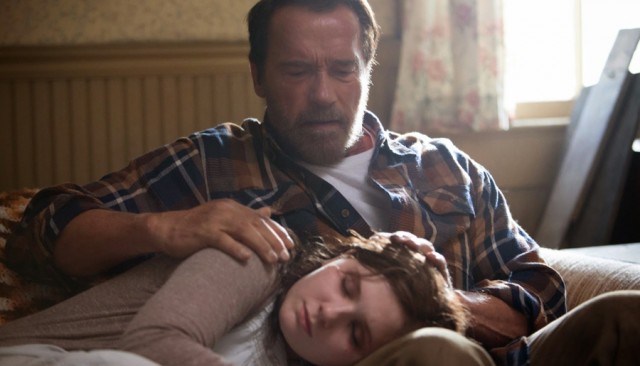 Graphic designer Henry Hobson already has a name in the film industry for his work as a title designer, but he had almost no experience as a director when he took on the zombie drama Maggie. In this slow-paced zombie story, a plague is slowly turning those infected by bits into zombies, but the threat can be contained by quarantining the infected and giving them a lethal injection to prevent them from regenerating.

The quarantine is overpopulated with the infected who are dying slow, painful deaths from the injections, and that knowledge makes it even harder for the families to turn their loved ones over to authorities. Starring Abigail Breslin and Arnold Schwarzenegger as a father and daughter facing the difficult choice, the movie is out now on Blu-ray/DVD. I spoke with Henry Hobson about the film, breaking the rules of zombie films, and subverting Arnold Schwarzenegger’s persona as a larger than life movie hero.

Lesley Coffin (TMS): With sci-fi and horror, the narrative usually has some allegory or social commentary. When you were given the script, were you thinking about the current debates on euthanasia and right to die?

Henry Hobson: In a way, yes. I was looking at that, and later on, the hysteria that happened much later after we’d wrapped, regarding Ebola. But the debate surrounding euthanasia certainly played a part. It’s a sensitive issue in any community and the zombie lens allows us to examine some of the most painful parts of our own lives, whether it is terminal illness or euthanasia. Because we ask the question, what do you do about ending a life, but ending the life of someone who could ultimately kill you if you don’t act? Or what do you do when you can’t send someone to Switzerland to die in some comfort.

TMS: And the contagion aspect is really debated. How do we do what’s best for the many without mistreating those suffering? For me, the most disturbing thing you have in the film is when the doctors and police are giving this father a choice rather than taking action. Because it is a choice he should never have to make, and probably won’t be able to without intervention from the outside.

Hobson: That was key to Arnold’s character. He is basically the pillar of the community, the local, go-to hero who is friends with everybody. And that plays into Arnold’s mythology as well. And because of that status, he is able to bend the rules, and that is truly terrifying. Because people who can bend rules because of status or money put society at risk. But this also shows the human side of this kind of man, asking, “what length would you go to in order to save your own daughter?” The community is rallying around him, to no one’s best interest.

TMS: Whenever you cast Arnold Schwarzenegger in a movie, he comes with a history of all these other roles and his public personality. Was that aspect of his personality something you wanted to use in the film?

Hobson: 100%. Because he brings all of that with him, it means I don’t have to have scenes of that character beating up men in the bar for joking about his wife or doing something physically heroic. Because I didn’t want to have any scenes at the beginning which showed him being this hyper-protective guy. And by having someone like Arnold, you already have that, and can then have him play opposite that in the film—showing what this pillar of the community would do when faced with that kind of personal tragedy, and Arnold is also a father, so he was able to bring that instinct to the film, which was really interesting. Maggie is the first film where he is really failing as a hero.

TMS: It seems very intentional that at the heart of the film, we have a father-daughter relationship, rather than father-son, mother-son, or mother-daughter. Why was that relationship key to the narrative?

Hobson: There is something so special about a father-daughter bond, because of the protective nature that tends to exist. A father-son relationship, especially during the teenage years, there tends to be a struggle. But even as teenagers, fathers tend to be very protective of their daughters, and to take that away and say he’s failed to protect her, what can he do now? That was interesting.

TMS: Is that why you include the side stories about the little girl and her father, and Maggie’s boyfriend and his father? To stress what you just mentioned about the dynamics of those kind of fatherly bonds?

Hobson: Yeah. With the little girl and her father, we are kinda shining a light on what could happen if Arnold doesn’t take action. The father Nathan, the man in the woods, is ultimately so bereft over the thought of losing his daughter, he was willing to sacrifice himself to spend more time with her. Just to touch and hug her. And the other father has to make a heartbreaking decision to give up his son to the authorities.

TMS: There are very few police and the town seems spread out and isolated, because it’s a farming community. Did you feel that the people in this community were very private and everyone was expected to take care of themselves?

Hobson: Yeah. We have the two neighbors who have sort of been hiding away from the general population. And there is a sense that the police haven’t been keeping the best eye on things and being overly emotional and empathetic, when they should have been a bit more hands-on and taken charge of the situation. And in general, it shows that whatever trauma we go through, emotions will always come through and effect some of our decisions. Some of the choices we make will be terribly impractical, but we are going to think about family and friends first in times of crisis.

TMS: You talk about in the film, but don’t show, that those given the vaccine to end their lives after being infected suffer extremely long and painfully. Did you ever consider showing the effects the vaccine would have on Maggie, or what people in quarantine went through?

Hobson: There was a long discussion actually about whether we should show quarantine and telegraph that kind of pain, and there was definitely an argument to do it. But there is also the argument that showing that would take away from the familial story. That’s actually why we have the radio at the beginning of the film and landscape shots, to give a peek into that side of the story from a distance and allow audiences to fill in the gaps.

TMS: The clothing, particularly the dresses the women wear, are very old fashioned, such as the little girl’s dress and the nightgown Maggie wears. Why did you make that choice about the costumes?

Hobson: I looked at a lot of pictures of depression era America, and what I saw was that when the country is going through hardship, we start holding ourselves back from excess and we want to be comforted by memories of past times. So people pull out old clothes and reuse them. Also, I wanted to remind the viewers that resources are limited, without putting holes in modern day t-shirts or something. That is also the reason we have older cars in the film and a muted palette.

Hobson: Yeah, we did. It’s interesting that with those kind of mass events, the hysteria that can result. It was interesting with the recent Ebola scare, because I was going up to Canada last year, and was asked “did I come in contact with anyone with Ebola.” And I just thought, “This is insane.” It is disease which is only infectious if people start showing flu-like symptoms, and you can’t get it before then. But the hysteria was madding. And then there was this poor girl who risked her own life to help people in Africa, and was hounded by the press for riding her bike around town.

Hobson: We talked a lot about it. We were playing with a family which seemed to come from everywhere. So we wanted to keep their roots kind of hidden. So the southern accent just kind of comes out to suggest that she isn’t from this immediate community. She comes from elsewhere. And it was also to emphasize the stepmother aspect of her relationship with Maggie.

TMS: When you make a zombie movie, there are all these rules which have been established in other films. Did you debate the rules you wanted to follow and those you felt comfortable breaking or altering for this specific story?

Hobson: The big question you always have to contend with is, are they fast or slow? And we ultimately decided that true zombies wouldn’t have the kind of speed we saw in World War Z. Their muscles have sort of rotted away and been replaced with this kind of poison. So we were very conscious of the rules and wanted to follow most of them, because we did change one big rule. The fact that they change very slowly.

TMS: The film was announced as playing at last year’s Toronto International Film Festival, but ultimately pulled out. What happened?

Hobson: When Toronto was announced, we were very, very close to being finished. It would have been a hard push and lots of sleepless nights, but we would have just made it. But then Lionsgate saw an early cut of the film, they said they loved it, but the last week decided some of the visual effects shots needed more work. So we talked about having a work-in-progress screening at Toronto, but the film was a bit too finished for that. So we just had to pull out of the festival and premiere at another festival closer to the release. But I was gutted when it happened.