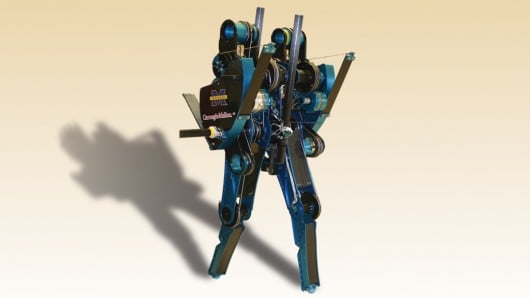 It may not sound like much, but MABEL‘s ability to run at a brisk 6.8 miles per hour is a pretty impressive accomplishment in robotics. Headed by Jessy Grizzle, professor of electrical engineering in the Department of Electrical Engineering and Computer Science at the University of Michigan, the members of the MABEL project have a wealth of in-depth knowledge about how complicated walking and running actually are. MABEL is designed to mimic actual human form in great detail, which is exceedingly complicated considering robots don’t have automatic feedback response like meatbags who have feet, skin, a brain, a sense of touch, and a built-in sense of balance.

The process of actually making MABEL run involves a lot of precise calculations, not to mention precise robotics. MABEL has dozens of springs that function as tendons, weighs in at 143 pounds, has a similar weight distribution, and takes running strides during which both of her legs are off the ground for 40% of the time, just like a real human. For the time being, she still requires a boom for lateral stablization, but even considering that, the feat is impressive. While it certainly isn’t hard to make a robot that can move and move fast, making robots that can adequately mimic activites humans do without a second thought is the biggest challenge robotics has to face. Thankfully, that should mean they won’t be rebelling any time soon.