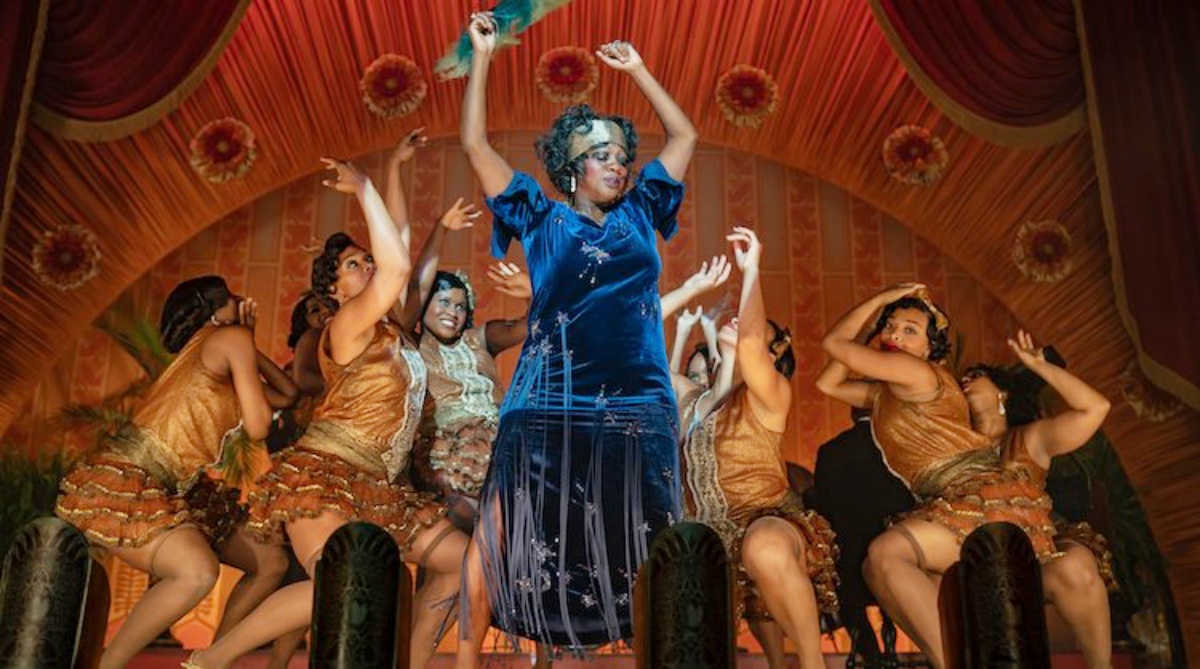 New Netflix film Ma Rainey’s Black Bottom carries the name of one of the foundational singers in American music: Gertrude “Ma” Rainey. Dubbed the Mother of Blues, the Georgia-born artist was one of the first African-American professional blues singers and recording artists. After watching the film, I wanted to know more about the singer, so I turned to Angela Davis’s Blues Legacies and Black Feminism to explore what drove the woman Viola Davis brought to life on the screen.

When we meet Ma Rainey, she is a woman completely aware of her own power and authority in the music world. White men may hold purse strings, but she knows how the money got there: through her work and through Black artists like herself. Blues as a popular music form deviated from the previous era because of its “provocative and pervasive sexual—including homosexual—imagery.”

As Davis explains, the blues as a post-slavery African-American art form allows an expression of romantic and sexual autonomy that before had not fully existed. That didn’t just mean the tenderness of love, but also the sorrows of being under the thrall of a man who loved you one moment and abandoned you the next. Yet, the singer-protagonist woman of these songs did not just get taken to bed.

“The protagonists in Ma Rainey’s blues often abandon their men,” Davis writes. The women of the blues were bold, and it was a boldness watered and nurtured in the realities of a post-slavery existence for African-American women. Not only that, but the songs by Rainey and her fellow blues singer, Bessie Smith, due to the sexual nature of the songs and their known bisexuality, also pushed up against concepts of Black female respectability that was perpetuated by organizations like the National Association for Colored Women.

The National Association for Colored Women advocated for “reclaiming” and saving Black women they saw as “least educated, most immoral, and most impoverished.” On the tin, that sounds like a promising concept, but when rooted in the idea that poor, “immoral” Black people are hurting the collective brand and not combating white supremacy, that puts unrealistic racist, labels on Black folk. It comes off as classist.

Ma Rainey and Bessie Smith were singing to the women that the NACW would have seen as in the need of saving, along with Rainey and Smith themselves. Both sang about their bisexuality with Rainey’s “Prove It on Me,” having one of my favorite lyrics ever:

“Went out last night with a crowd of my friends,
They must’ve been women, ’cause I don’t like no men.”

So what does this mean in the context of Viola Davis’s Ma Rainey and August Wilson’s play that the movie was based on? Well, we only get a sliver of Ma in the show, as she is both the titular character and, in some way, a wildfire—antagonistic to Levee, who we spend more time with, and a creature of chaotic energy throwing her weight around. We know she is popular, but we don’t get the context of it outside of how Davis carries the role. Through Viola Davis, we feel Ma’s power, her sensuality, and her compassion, but also her weariness in just a few shots.

In one scene where Ma speaks to Cutler (Colman Domingo), she perfectly explains that she knows that the recording they’re making cannot be costing that much and that she has sold the most records of anyone they have. Yet, she can’t even have a coke there on time. The ending shot of the movie and what happens to Levee all serve to prove that, despite how intimidating she may seem, Ma is speaking from experience. She has operated within the white world and knows that as soon as she performs for them, her value is gone. So, she drags it out because she can.

Ma Rainey is a woman who had to carve her mark on the world deeply because she wouldn’t get a spot otherwise. She helped nurture talents, like Bessie Smith, and held on tightly because no one was going to hold on to her. In that, I walked out of Ma Rainey’s Black Bottom wanting to see more of this woman, who lived a full life and lived it loudly. There is a story to be told there, and it has only been just barely tapped into.