Lumberjanes #17 Awesomeness: Please be in the Movie | The Mary Sue 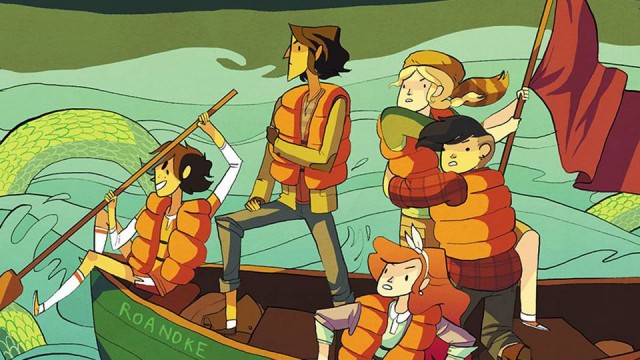 “Brother and sisters, take a knee. For today I’m here to preach to you the wonder of Lumberjanes. For Lumberjanes is the comic you should be reading. Should you have failed to be reading Lumberjanes, I suggest that you rectify this most urgently and pur-chase the Lumberjanes at once from your nearest Lumberjanes stockist or using the power of elec-ricity. All hail and beware the Kitten Holy. Please turn to hymn 23:14, ‘The Mountain is Mighty and Don’t ye Dare Wake it Now’ and sing along with me.”

You might be able to tell I’m something of a Lumberjanes fan, and you’d be right. It’s on issue 17 now, and although things have changed from the contained story that launched Lumberjanes, the comic has remained consistently good. If you don’t know, Lumberjanes is a comic where girl guides (Lumberjanes) and scouts (Scouting Lads) spend summer at camp; only unknown to the kids, camp is in a magical forest filled with mystery and danger. Time also passes differently there; it moves way slower than time outside the forest. There are a few comics that turn the written word as well as Lumberjanes. Saga, Squirrel Girl, and The Spire all spring to mind, there are others but the list is short. The end of issue 17 is beyond good; it’s excellent, and I’m celebrating while at the same time scared as hell that they’re going to screw up.

Tune out now if you haven’t yet read Lumberjanes #17 and don’t want it spoiled for you. Fair warning. One of the Lumberjanes is Jo, a WoC, genius, and the daughter of two equally genius dads. In issue 17, Jo reveals that she’s transgender, and the comic handles it fantastically. Throughout this issue and the last, Barney, a boy from the Scouting Lads, has been tagging along with the Lumberjanes, much to Jo’s evident distress. 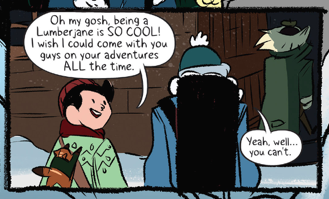 Jo’s been snarking at Barney and saying he should’t be there, much to the surprise of the other Lumberjanes. Jo is able to see something in Barney that the other Lumberjanes haven’t fully grasped yet—something Barney themselves is just only starting to wrestle with. Barney feels different, like he doesn’t belong with the Scouting Lads, and Jo realises why.

Jo, however, doesn’t want to be reminded of her past and is trying to push away dealing with the memories as hard as she can; at the same time, she’s pushing Barney away. It isn’t until later that Jo realizes what she’s doing, and you get the best transgender talk yet seen in comics. 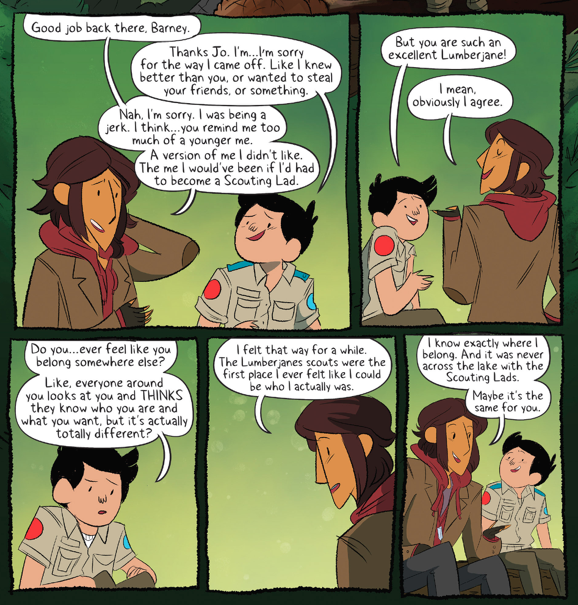 It’s touching and brilliant. Breaking it down, it goes like this: Jo goes and finds Barney after he works out how to save the Lumberjanes—and by extension, all humanity—from the all-powerful Grootslang. (Hey, read the issue, I’m not giving you everything here!) Jo admits to being a jerk towards Barney, then comes clean about why she was acting that way, and Barney admits to feeling … different, and not like other people see them. Jo then says she felt the same way until she became a Lumberjane (girl) and that maybe Barney too doesn’t want to be a Scouting Lad (boy) either.

Thoughtful representation like this in an all-ages comic where young trans kids can read it is so important. You know how many times this happens in any media at all? Freaking never. Kids who are feeling alone, feeling different and confused, might stumble onto Lumberjanes and see they’re not alone after all—that they too can be accepted and change to be who they need to be. Transgender representation for kids is vital, and it’s almost utterly missing from society even in 2015.

I had no such connections when I was young; I buried everything and hid part of myself away as deeply as I could because everything I read, everything I saw on TV, and every movie I’d seen told me that I would be seen as a joke. Worthless. Someone to be mocked and made fun of. It took me decades to unpack everything I’d internalized and, thanks to the Internet’s mainstream appearance, learn who I was.

We, the trans community, need this. The representation seen in Lumberjanes #17 is vital to help prevent other kids going through what I and many other trans people went through. I’m so proud of everyone involved in taking this step in Lumberjanes, and I hope it becomes a fully developed storyline. Barney can find themselves, stop being a Scouting Lad and become a Lumberjane, deciding along the way exactly how they want to be known and the pronouns people should use for them. If done well, it would be so helpful. I’m scared they’ll get this wrong—really scared—but I’m equally hopeful they won’t.