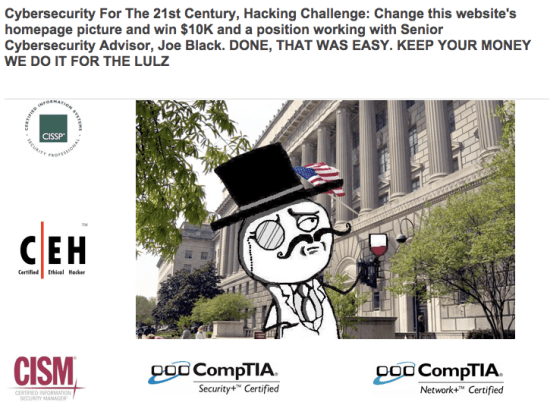 No reward necessary, the Lulz are enough. When cybersecurity consulting firm Black & Berg issued a challenge to hackers to change the picture on their website for a $10K reward and a position working with senior advisor Joe Black, LulzSec was more than happy to oblige. But LulzSec has said they won’t be collecting the reward, leaving the message “Done, that was easy. Keep your money. We do it for the Lulz.” on the Black & Berg homepage.

Joe Black needn’t worry about his reputation in light of the hack, as he is in good company with other LulzSec victims. The group also claims responsibility for hacks of PBS, Fox, a UK ATM, the television show X-Factor‘s contestant database, and InfraGuard (notable for its affiliation with the FBI) in addition to its highly publicized hack of Sony.

LulzSec rose to attention after the Sony hack, when they broke into SonyPictures.com and compromised over one million users’ personal information, publishing passwords, email addresses, and dates of birth from the sites’ users. They say their goal was to expose Sony’s weakness to cyber attack, though LulzSec’s Sony hack came on the heels of an April attack on Sony that had already exposed the information of more than a million PlayStation Network users (the hackers in that case have not been publicly identified).

Whoever they are, it is obvious that LulzSec is highly amused by their own antics. One visit to their website, whose homepage features a shout out to Rebecca Black’s “Friday” and you’ll understand that these hackers are having “fun, fun, fun, fun” at the expense of companies and consumers alike. The homepage also has a picture of the “LulzBoat,” complete with “Love Boat” soundtrack and replacement Lulz Lyrics. Should the Love Boat not be your thing, don’t worry there is a link to mute the sound. But wait, clicking it makes Love Boat play lounder. Of course it does. Lulz. Despite the seemingly humorous antics of this group, what LulzSec is doing is, of course, illegal.

Much of aftermath of the Black & Berg hack played out on Twitter, with Joe Black first saying “No Comment” followed by the tweet ” Wait, we do have a comment. Please unf**k our website. Thank you. ~Joe.” Black then returned to give some credit to the hackers, comparing them to ninjas “We’re not sure what happened, we’re looking into it. It seems whoever is responsible was very good at covering their tracks #ninja.”

(via thinq_ and HuffPost Tech)