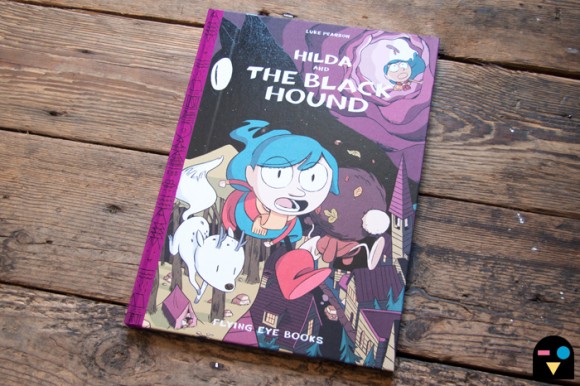 Meet Hilda. She’s a plucky, young adventurer who explores the fjords and streets of her hometown with her trusty pet foxtalope.

Hilda is the main character in a series of all-ages graphic novels written and illustrated by Luke Pearson, the latest of which, Hilda and the Black Hound, was published last week by Nobrow. The Mary Sue was at Strand Book Store in New York for the release of the new book and to seePearson in conversation with writer and artist George O’Connor (Journey into Mohawk Country, the Olympians series).

The Hildafolk series follows Hilda’s everyday adventures in a world full of fantastical creatures tucked into the small places most people don’t think to look. She’s encountered trolls, giants, elves, majestic birds, house spirits, and mysterious hounds. But Hilda’s world is grounded in modern reality. She lives with her mum in a small cabin before they have to move into town, and faces many of the challenges kid do when navigating life: meeting new people, earning Sparrow Scout badges, doing chores, and camping in the rain (because how else will she really appreciate coziness).

While Pearson said he pulled inspiration from René Goscinny and Albert Uderzo’s Asterix and Tove Jansson’s Moomin, O’Connor likened his work to that of Chris Ware and Hayao Miyazaki. To me, Hildafolk feels like The Goonies, but in the fjords and without the gangsters and pirates.

But really, the books are steeped in Nordic folklore. Hilda’s name, and the Hildafolk title of the series, comes from the Icelandic huldufólk, meaning “hidden folk” and refers to the elves and spirits of the local folklore. Pearson mentioned picking up an interest in the vikings and Norse folk tales as a kid from his granddad. At university he had the opportunity to really delve into the the same tales, “and all that eventually informed the mythology of these comics.”

O’Connor asked Pearson what inspired him to write for a kid audience; he  said “it was more that I wanted to explore this [folklore], these tales and these creatures and things. And the natural audience for that kind of thing is children.” His cartoony art style and bright flat colors work well for a younger audience as well. But Pearson said he didn’t set out to write a children’s book, which is part of why it works so well as a true all-ages comic.

There’s a subtlety and sophistication to the Hildafolk books; pauses and quiet panels speak volumes to what a character is thinking or feeling. While Pearson’s art style could be described as simple cartooning, he does what masterful illustrators do, express a lot of emotion and mood with few, clean lines and rich color. You get incredibly detailed and powerful panels and pages which never feel cluttered, unless they’re intended to be. These are truly beautiful books and Hilda’s charming sense of wonder is appealing to everyone, no matter how old or young.

O’Connor also asked Pearson if he identified more with Hilda or her mum. “I don’t relate to Hilda, really. I understand her obviously and I find her appealing as a person. She’s kind of…I’d like to be like her and I wish I was like her when I was a kid.” Pearson later talked about Hilda’ sense of adventure and courage. She has a big heart, and in each of the books she does her best to help each of the hidden folk she comes across. Hilda is delightful and charming and probably the best kid ever.

Continuing the line of questioning, Pearson said he related more to Hilda’s mum. He talked about intentionally trying to develop her character:

I’m really interested in trying to show her as a real character. And a flawed character who’s vulnerable. In children’ fiction the parents tend to either take an antagonistic role or a totally comforting role, like someone who will make everything fine, or they’re absent. I like the idea of trying, even in little ways, of showing she’s a real character and a real person and hopefully the reader can understand why she does things.

Pearson’s nuanced and well-developed characters are yet another thing which make his books so wonderful. Hilda’s mum and her relationship with Hilda is one of my favorite things about the book. 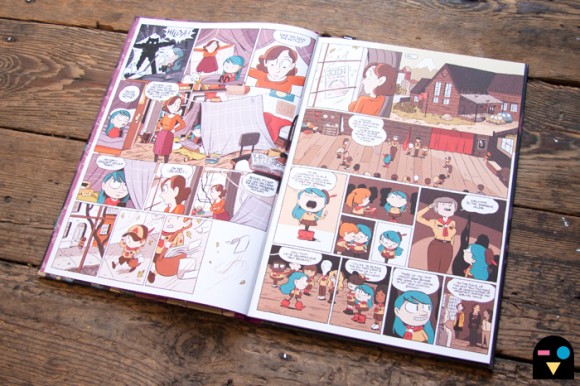 The Hildafolk series includes Hilda and the Troll, Hilda and the Midnight Giant, Hilda and the Bird Parade, and the latest release, Hilda and the Black Hound. Pearson has also written and illustrated the comics Everything We Miss and Some People (which you should find and go read, like, right now). Outside of comics, he’s written and storyboarded the “Candy Streets” and “Frost & Fire” episodes of Adventure Time.

Strand Book Store hosted the event in their Rare Books Room, which is full of beautiful antique volumes and large leather chairs. It’s a really interesting space and if you’re in the New York area, I definitely recommend checking out their calendar of events just for the experience. The audience at the Strand was mostly full of art students, proving the broader appeal of the Hilda series. You can check out a recording of the event on the store’s YouTube channel.

Ali Colluccio has written for Fantastic Fangirls and Book Riot. She lives with her daredevil of a cat, Minerva, and enjoys cocktails, comics, and curling. If she could have any superpower in the world it would be telekinesis because even if she had super-speed, she’d still always be late. Ali can be found tweeting with reckless abandon as @WonderAli.