Can we upgrade her to Warrior Queen? 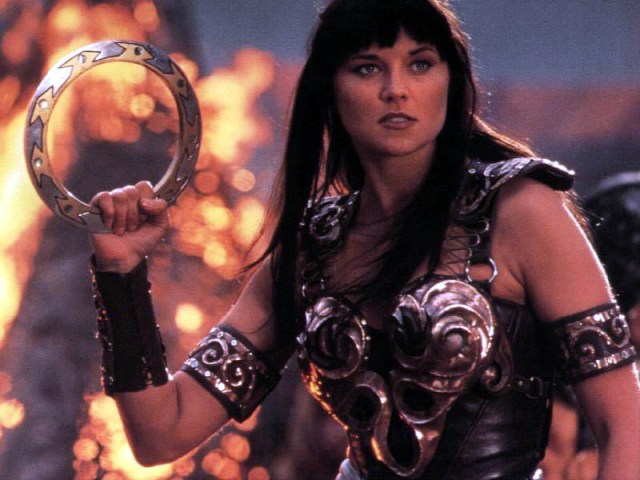 The Warrior Princess herself has spoken! In a recent interview with Den of Geek while promoting Ash Vs. Evil Dead, Lucy Lawless said that she would love to do a Xena: Warrior Princess revival. Xena fans everywhere passed out from sheer happiness.

Ash Vs. Evil Dead is pretty much a Xena reunion already, what with Bruce Campbell (who appeared as Autolycus on Xena), Sam Raimi (Xena Exec Producer) and Rob Tapert (Xena producer and Lawless’ hubby) being involved. So, it makes sense that Lawless would be asked about getting the band back together for more Xena. It seems Lawless really wants this to happen:

I’ve been pitching that, actually. The fans really do want that, and I’ve met some people who’ve crowdfunded some things, and I’m just like, ‘Why don’t we just do that?’

While I’m sure many of you would love to just back a Kickstarter like this RIGHT NOW, there are two pretty big reasons why this may not happen as soon as we’d like. First? Legal red tape. Says Lawless:

It’s still about who owns the rights to Xena. But it would still be cool to do it again with Renée [O’Connor], me, Ted [Raimi], and Bruce. It’d be a fun little gig, but what that is I don’t really know.

Then, of course, there’s the tiny matter of Xena having ended her own series, you know, dead. However, as any fan of sci-fi and fantasy knows, dead doesn’t necessarily mean dead. Apparently, Lawless feels the same way:

So what? Technicality! No one really dies! Screw her head back on, it’s a bit wonky, and she’s got a really bad attitude since she’s been in a box for 20 years, so they’ve got to get Xena’s mojo back, and go and save the world somehow.

What’s more, perhaps a reboot would allow for better special effects, as well as an acknowledgement of Xena/Gabrielle that is actually text, rather than subtext. I think that Lawless is on the right track with how the story could go, and if this happens and a crowdfunding campaign gets underway, I would give this ALL THE MONEY.

What do you all think? Do you want to see more Xena?