Google's Got Some 'Splainin to Do 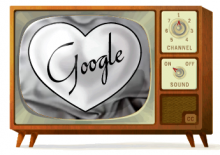 Today’s Google Doodle depicts an old television in honor of Lucille Ball’s 100th birthday, if she were alive today. In place of the “I Love Lucy” script that appears in the heart, “Google” appears, drawing itself in similarly to how the original logo logo draws itself in.

Click on the channel knob and the Doodle plays various popular clips from the show, including — obviously — the chocolate conveyor belt scene, as well as a whole bunch of her iconic, screeching whining.

Here’s what Google has to say regarding the Doodle and Lucy:

Lucille Ball may have been born 100 years ago today, but her jokes are timeless. Having grown up with the comedic genius of “I Love Lucy,” it’s hard to believe that Lucy, Desi, Fred, and Ethel wrapped up the initial series in 1957. Lucy’s creativity, absurdity, and ever-changing facial expressions (especially when she was scarfing down candy, stomping on grapes or touting a new energy drink) have brought joy and laughter to generations of viewers.

We’re incredibly happy to celebrate her birthday with a doodle to highlight her brilliant career as an actress and businesswoman. Through the old-timey TV live on the google.comhomepage all day on August 6th, you can flip the six channels for a special Lucy broadcast.