Robots don't get to have all the fun. 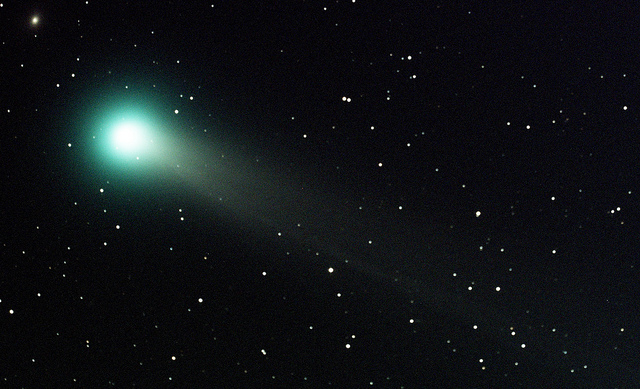 ESA just got a pair of robots up close and personal with a comet, but they don’t get to hog all the comet action. Comet Lovejoy is visible in the night sky right now. You’ll probably need binoculars to see it at this point, but it should be visible to the naked eye—depending on lighting conditions—as it reaches its peak brightness over the next two weeks.

Lovejoy was only discovered in 2011 and is in a long orbit that lasts  11,500 years (Whoops. Sorry about those facts, folks. It looks like Lovejoy isn’t so sure on them, either as gravitational changes from its travels through the solar system are now estimated to have changed its next approach to only 8,00 years.), so you’re not going to get another chance to see it once it passes back out of view. It wasn’t expected to make it into the range of the magnitude scale visible to the human eye (magnitudes 0-6 with 0 being the brightest stars), but it has exceeded expectations and reached magnitude 5.3 or December 26.

The comet will come closest to Earth on January 7 and shine about as bright as the dimmest star in the Little Dipper’s bowl. If you can see all the stars in the Little Dipper and live in the northern hemisphere, you should be able to see Lovejoy, too. You don’t even have to go out at a crazy hour—about 9PM should be just fine, especially around the 7th, when the Moon should start rising late enough that it doesn’t interfere with light.

So. What are you waiting for? Oh, for it to get dark, probably. Or if it’s too cold for you outside or something, you can watch a live telescope observation on January 6 and 11. Otherwise, I assume you’ll be out there, because comets are amazing. Just look at this timelapse of Lovejoy and tell me you don’t want to see that: