The vigil was the latest example of police brutality against peaceful protesters. 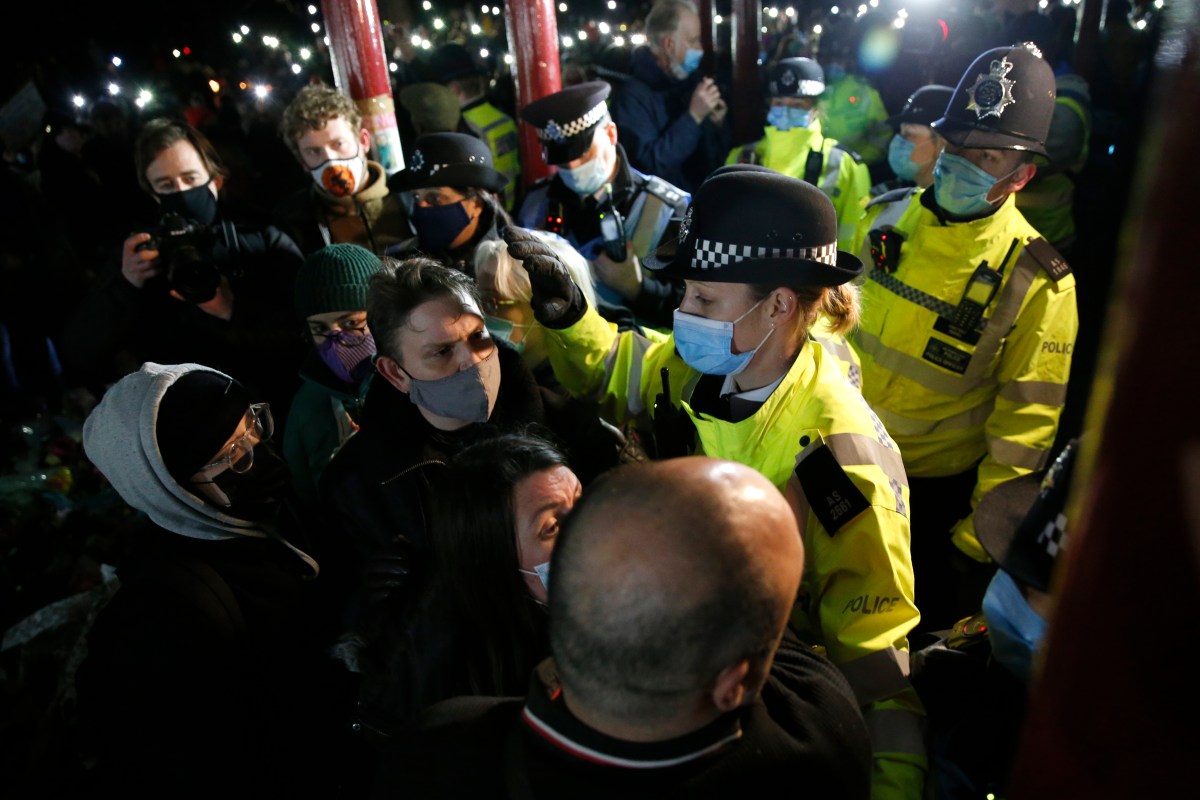 The abduction and murder of 33 year old Sarah Everard has sent shockwaves throughout London and the world as yet another brutal reminder of the violence women face at the hands of men. Everard was walking home to Brixton from a friend’s house in Clapham, England on March 3 when she was abducted. Police have since arrested Metropolitan Police officer Wayne Couzens on suspicion of murder.

In response, organizers from “Reclaim These Streets” planned evening vigils across the country, with the main one to be held at the bandstand of Clapham Common, the area where Everard was last seen. The vigil was canceled by a judge citing coronavirus restrictions, and organizers instead asked people to shine a light on their doorstep instead for Everard and for all women affected by violence.

But that didn’t stop thousands of peaceful protesters from flocking to Clapham Common, bearing flowers and candles, and chanting “Shame on you!” and “How many more!” The protesters also chanted “This is a vigil, we do not need your services,” at the police present for the protest. In response, the Metropolitan Police began corralling protesters, throwing them to the ground and arresting them. Videos of police brutality at the vigil quickly spread on social media, as outrage against the police grew.

Women being snatched by police at the vigil for Sarah Everard. Shameful, shameful scenes. pic.twitter.com/fyUqcfCyug

A woman is arrested by Metropolitan Police officers at a vigil in memory of Sarah Everard on Clapham Common, London. Photograph by @jackhillphoto pic.twitter.com/qhp8GFibNr

This is what the Sarah Everard vigil looked like before tens of Met Police moved in, disrupted the mourners and proceeded to arrest women off the bandstand. Shameful pic.twitter.com/RcsIF76Nwj

London Mayor Sadiq Khan tweeted, “The scenes from Clapham Common are unacceptable. The police have a responsibility to enforce Covid laws but from images I’ve seen it’s clear the response was at times neither appropriate nor proportionate. I’m contact with the Commissioner & urgently seeking an explanation.”

The scenes from Clapham Common are unacceptable. The police have a responsibility to enforce Covid laws but from images I've seen it's clear the response was at times neither appropriate nor proportionate. I'm contact with the Commissioner & urgently seeking an explanation.

The Metropolitan Police released a statement saying they “absolutely did not want to be in a position where enforcement action was necessary,” but that “we were placed in this position because of the overriding need to protect people’s safety.” But clearly, no one was made safer.

As it always does, the police presence at the vigil only escalated violence and unrest. And if their concerns were really based in COVID-19 safety, then how does arresting and brutalizing women keep them safe in any way? The police’s treatment of the women protesting only highlights how prevalent violence against women is. It’s especially damning considering a fellow police officer stands accused of Everard’s murder.

Once again, politicians and the police would rather empower themselves and silence dissenters than actually examine their role in inciting violence, racism, and fear. Their thirst for autocracy outweighs our need for accountability.