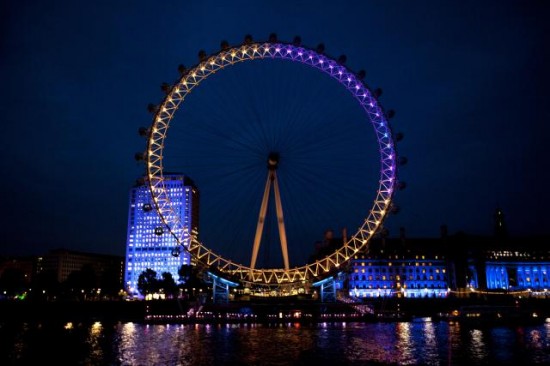 The London Eye will be taking the pulse of the United Kingdom throughout the London 2012 Summer Olympics, lighting up at 9:00 PM every night colored with tweets on the Olympics. The show started last Thursday, and so far, the U.K. is feeling golden.

EDF Energy, a major U.K. utility company and sponsor of the London Eye, will be working with Mike Thelwall, “the UK’s foremost expert on Twitter sentiment analysis”, and Sosolimited, an “art and technology studio specializing in interactive environments and multisensory design.”

The team will scan U.K.-based tweets for phrases like “Olympics,” “Torch Relay,” “#energy2012,” and “London 2012,” and put the tweets through Sentistrength, Sosolimited’s sentiment system that assigns points based on the intensity of the emotion expressed in the tweet, whether positive or negative. The algorithm has a library of 2,750 terms, including emoticons, “omg,” “LOL,” and “totes amazeballs.”

The algorithm we developed converts real-time social emotions into color and motion and then tweets to the light show. We distil 24 hours of action into a 24 minute visual concert that embodies the emotional peaks and troughs of the day.

You can watch the show here every day. The live data is pretty amazeballs too, so you should totes check that out.