So Many Easter Eggs, and Maybe Hints, Were in Loki Episode 5

Loki has a lot of references to the greater lore of the character in the world of Marvel, as well as the Norse mythology behind him. But in episode 5, titled “Journey Into Madness,” we were bombarded with a lot of different Easter Eggs all at once, some of which are very important to who Loki and Sylvie could be going to meet next week.

So let’s explore one of the more important Easter Eggs from episode 5 (and one very fun little nod to a classic franchise).

**Spoilers for Loki episode 5, “Journey Into Mystery,” lie within.**

Thankfully, sites like Den of Geek broke down all the Easter Eggs that showed up in this most recent episode, because as I said, there were LOTS of them. But let’s talk about some of my favorites—mainly that of the Qeng Tower that we see in the background and the castle. The reason Qeng Tower is interesting, as Inverse points out, is because it is the company that bought the Avengers Tower from Stark Industries in the comics and is run by a version of Nathaniel Richards, a.k.a. Kang the Conqueror.

As our Princess Weekes pointed out, a lot of signs have been pointing to Kang throughout the series, especially because we know he’s coming to the Marvel Cinematic Universe in Ant-Man 3 with Jonathan Majors, but still. From having Renslayer and Alioth in the show to the references in this episode, it either feels like they’re trying their best to get us to think it’s Kang, or they’re just setting us up for him in the finale.

Then, there’s the castle that we see at the very end of the episode. While Dr. Doom has a castle, it could also be another reference to Kang if it’s Castle Limbo—again, that’s a lot of references to Kang the Conqueror, who we KNOW is in the MCU already. So is this Loki‘s way of distracting us from who could really be waiting for Loki and Sylvie? Or are they just being obvious since there WERE so many other twists and turns throughout the show to keep us guessing?

Outside of the connections to Kang, this episode had tons of Easter Eggs, including everything from the Thanos copter to a fun little shoutout for fans of … Ghostbusters? Kid Loki is drinking a Hi-C when they’re in the clubhouse, but if you look closely enough, it’s the Hi-C Ecto Cooler that came out in the ’80s. Does this mean that Kid Loki stans the Ghostbusters? Because if so, I’d like to know which one is his favorite. I’m going to go with Egon Spengler.

There were plenty of other Easter Eggs, and I’m sure once we watch the finale next week, we will all go back through the series and see where it was leading us to from the very beginning, but I hope all these Easter Eggs lead to one thing: Mobius, Sylvie, and Loki riding away together on a jet ski. 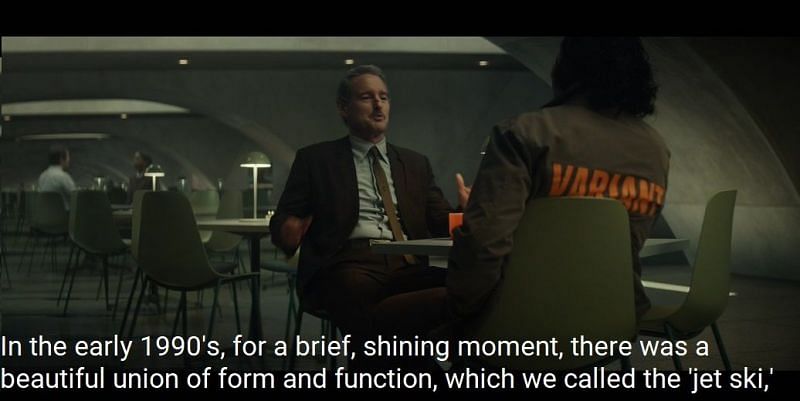