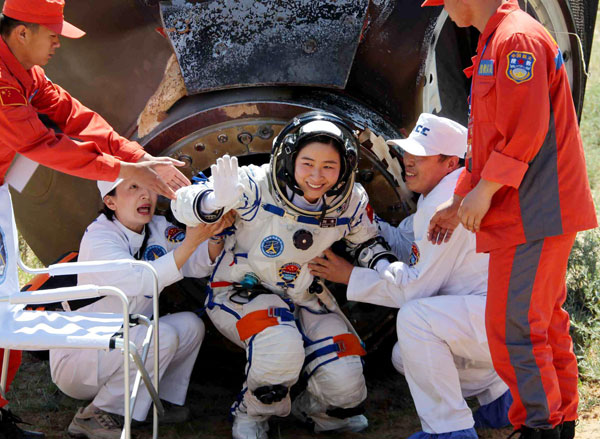 Remember Liu Yang, China’s first female taikonaut, who blasted off into space earlier this month? She returned to Earth today when the the Shenzhou-IX spacecraft landed safely in Inner Mongolia at 10:05 local time (02:05 GMT).

The Shenzhou-IX was slowed by parachutes as it descended back to Earth, in addition to rockets which were fired when the capsule was 1 metre above the ground, slowing the capsule to a final speed of 3.5 metres per second. Originally, Liu and her fellow taikonauts, Jing Haipeng and Liu Wang, took off on board Shenzhou (“Divine Vessel”) IX, which they docked with the Tiangong-1 module currently orbiting the Earth. There they have spent the past 13 days conducting experiments and technical demonstrations in anticipation of building a larger space station. Afterwards, they moved on to the Shenzhou-IX, the craft in which they ultimately returned to Earth.

According to New Scientist, “a second crewed flight, Shenzhou-X, is planned for next year before China delivers its more sophisticated Tiangong-2 module to orbit. Subsequent modules will then follow. The completed station is expected to be similar in size to the now-defunct US space station Skylab, which is roughly a sixth of the size of the International Space Station.”

During her elated exit from the capsule, Yang perfectly summed up the occasion: “It feels so good to stand on Earth, and it feels even better to be home.”

Welcome back to Earth, Liu Wang!