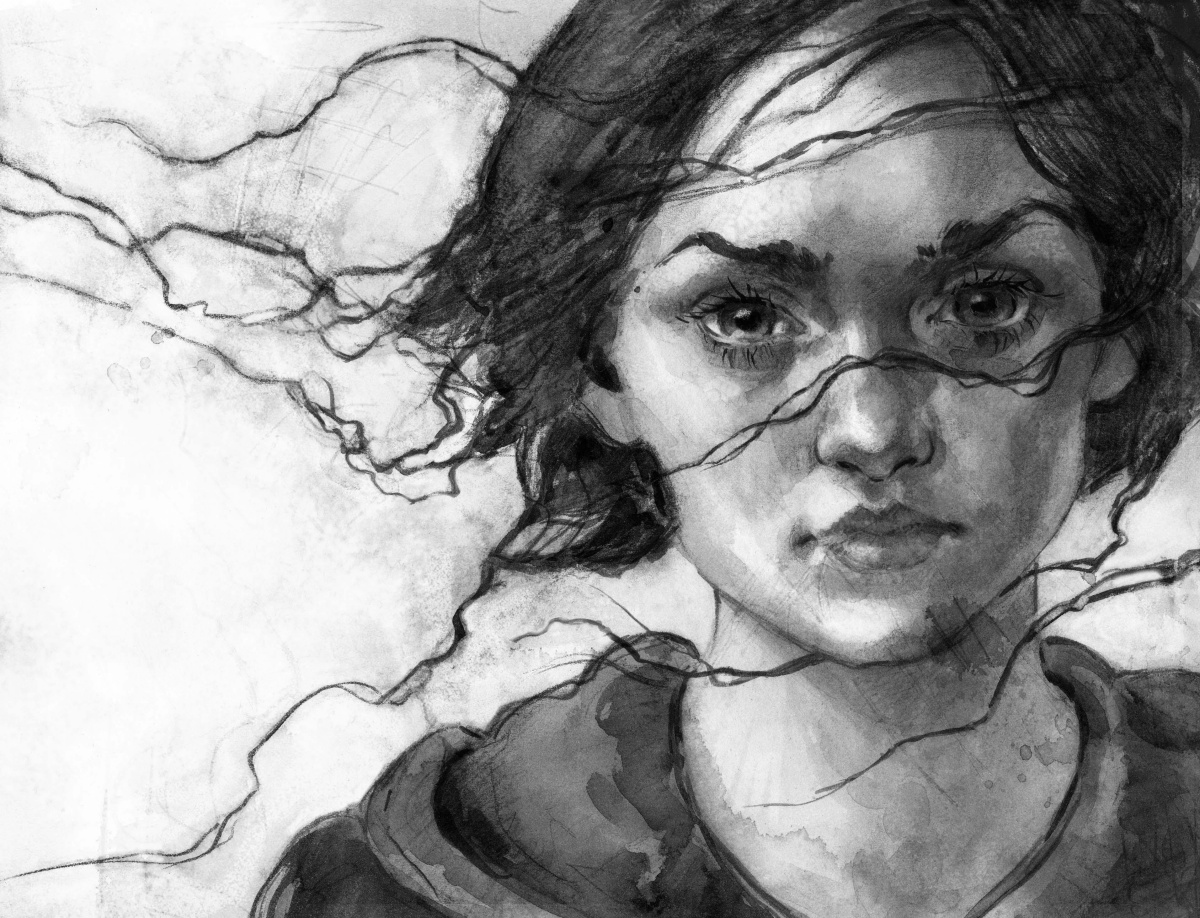 “Mary Shelley wasn’t just the author of Frankenstein, she was a radical teenage girl who helped set in motion the feminist movement by defying the restrictions society imposed upon women. She dared to challenge tyrannical power, unjust wars, slavery, and neglect of the poor in her book. She changed the course of literature by inventing the Industrial Age science fiction novel, and delivered the most iconic monster ever created. I wrote Mary’s Monster to honor her strength and passion.”—Lita Judge

Author Lita Judge created an amazing book free verse with over three hundred pages of black-and-white watercolor illustrations in her book Mary’s Monster: Love, Madness, and How Mary Shelley Created Frankenstein earlier this year. It is a beautiful piece of work that looks in depth at the life of Frankenstein author Mary Shelley. Not just her legacy as the author of the foundational piece of science fiction, but also the hardships of being a young woman filled with grief, heartache and a passion that changed the literary landscape.

We were honored to speak with her for Women’s History Month and for her to give us such personal answers to the realities of gender inequality and harassment she has seen/experienced in her life. Also, her grandmother was a badass.

My greatest influence was my grandmother, Frances Hamerstrom. Though she was raised to be a housewife, she harbored a great curiosity for the natural world. As a young woman, she saw how overhunting and the heavy use of pesticides decimated wildlife populations. Instead of ignoring these concerns, she became an ornithologist and wildlife conservationist. She and my grandfather lived in a house without running water, in the middle of thousands of marshland acres she fought to preserve. She and my grandfather were both credited for saving the greater prairie chicken from extinction.

Mary Shelley was also a huge role model for me. In a time when few women were allowed an education, she courageously challenged convention with her writing. She wasn’t afraid to speak out against injustices. And though she was vilified for her beliefs, she never backed down. She paved the way for women to be writers, artist, or anything they wanted to become. She taught me that it is up to ourselves to claim our voices.

TMS: Where do you think we are in terms of still having to struggle to highlight the accomplishments of women?

We still lack a fair playing field — equal pay for equal work, for example. My grandmother worked as hard as my grandfather but was paid exactly half as much by the government office that employed them. We have come part way toward leveling this injustice, but not nearly far enough. Also, along that line, we still lack equal opportunity. Many people think we have an even playing field as professional children’s book illustrators, but while 55% of picture books in 2016-17 were illustrated by women, we’ve seen 84% of the Caldecott Medals (the top industry award) since the year 2000 go to men. And no award has ever gone to a woman of color! Awards and the prestige that goes with them translate directly into future opportunities to sell books, speak at schools, and appear at conferences, which has a huge impact on an illustrator’s pay. Almost across the board, whatever our professions, women are still facing inequality in pay and opportunity.

I loved science when I was a kid. But I was constantly told that little girls aren’t as good at math and science as boys. I knew I wanted to become a geologist and a paleontologist but I was repeatedly told that I would “grow out of it, like most girls” implying that it is we girls who drop our interest. In truth, we are discouraged out of it. I thought that if I proved that I was good and passionate about science it would quell any pushback. What shocked me most was that even after working my way through college, graduating top of my class, and landing a job as a geologist, my male colleagues often called me “the affirmative action hire” rather than by my name.

For me, feminism means fighting for the right to live the life I envision for myself, rather than the life others envision for me. It is the right to hold any job I choose — to have the same opportunities, responsibilities, compensation, and leadership roles in a non-toxic environment.

While working as a geologist, I was sexually harassed by more than one colleague. I was threatened, intimidated, demeaned, brutally treated, touched, and then sexually assaulted. The assault was extremely damaging, but what compounded this hurt was that most of my male colleagues thought I should not speak out about it. I was told more than once that I had to expect this if I was going to work “in a man’s profession.”

We are now beginning to address the ubiquity of sexual harassment and sexual assault. Women are learning how to give strength to each other on this front rather than cowering in silence. This is the first time I’ve publicly written about being assaulted. It was the courage I gained from other women speaking out that has allowed me to do so. We need to relentlessly create awareness on this front to change the climate of our working environments.

We need to share our stories. I was too ashamed by my assault, while a geologist, to speak out about it. Instead, I walked away from a profession that I was extremely good at, that I loved and had worked so hard to attain, because I no longer felt physically or emotionally safe.

By being shamed, we give away our power. By being silent, we limit our greatest weapon: our ability as women to empathize with one another and to work together. We must tell our stories. I write about women who fought for equality in hope that others will be inspired by their strength. I write too, to honor their strength and courage. But I also need to find the courage to voice my own story. We, as women, can support each other, and build a safer and saner world, if we don’t allow ourselves to be shamed into silence.

I am proud that we as women embrace the struggle to have careers while still devoting so much of ourselves to our families. Like many women, I grew up in a family where my father went to work and never did a household chore, while my mother dreamed of a career, but never found time enough beyond household duties. I think it’s always a struggle to find a balance. But it is women who are leaders in finding ways to embrace a balance where one can find satisfaction in both worlds, rather than only sacrifice.

And I am proud of how many women writers and artist strive to create stories that feel so inclusive. Perhaps because we have faced inequality, we recognize others who also face that challenge. I grew up finding very few female or racially diverse heroes in the fiction and nonfiction that I read. I see that changing and I think women, who are fighting and working hard to tell inclusive stories, despite an uneven playing field, are leading that charge.

I love brave, witty, artistic Karou, in Laini Taylor’s Daughter of Smoke and Bone trilogy. She never gives up on doing what she feels is right no matter how much she is pressured to do otherwise, and she never allows hope, or her love for humanity, to be quenched. I also love Faith Sunderly in Frances Hardinge’s, The Lie Tree, because she burns with curiosity. Expected to be quiet and submissive, like all young women of her time, she won’t let her intelligence be denied. And I particularly love Melinda in Laurie Halse Anderson’s, Speak, because she battled against the intense feeling of shame and pain, and found her voice. And by speaking out, she has helped all of us to do the same.