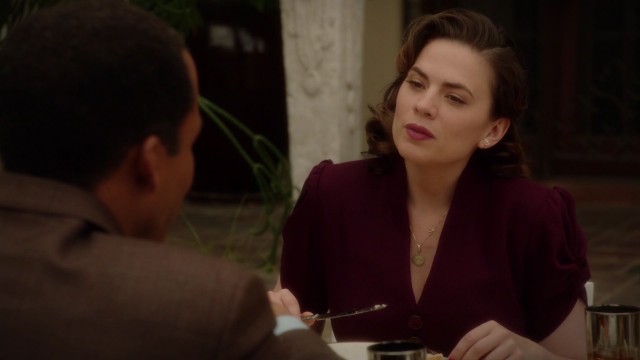 Spoiler warning: This piece contains spoilers for the second season of Agent Carter.

At this point, Agent Peggy Carter and her lipstick are practically iconic. When the first season aired on ABC last  year, about half of my friends rushed out to buy her signature shade, Besame Red Velvet. Besame is a favorite with makeup artists who are doing mid-century set shows, because the brand is entirely about creating period-accurate shades. Red Velvet was used because season one is set in 1946, and this shade is based on the one that was most popular that year. When I heard that the second season would make the move west to Los Angeles, of course my first thought was how much Peggy’s clothes and makeup would change to suit the new locale, and boy, was I not disappointed. In season two, Peggy’s makeup is practically a barometer on how she’s feeling, with a host of new shades that make our favorite agent’s lips a veritable mood ring.

The history of lipstick is a long one—both men and women in ancient Sumeria wore lipstick, some 4-5,000 years ago, made out of crushed gemstones and, of course, lead. (Lead is about as ubiquitous to the history of makeup as, say, water is to the history of boats.) Back then, it was used to connote status, and soon even the Assyrians and Egyptians were wearing it. It wasn’t until the rise of ancient Greece that lipstick gained its less-than-savory reputation, as well as its associations with femininity, as it was mostly connoted to prostitutes. This didn’t stop ordinary Greek citizens from wearing it, however.

This remained true well into the 20th century. Fascinatingly, the rise of lipstick in the 20th century has a feminist bent: It was largely worn by suffragettes, who pulled its reputation out of the brothels and into respectability. Suffrage leaders Elizabeth Cady Stanton and Charlotte Perkins Gilman would often wear lip rouge to rallies as a way to shock men, and their fellow suffragettes followed suit. Even more respectable ladies used “natural” methods to redden their lips without products, like biting them, soaking them in hot water and then applying pomade, and other weird and time consuming methods that make me want to yell, “JUST USE THE ROUGE IT’S SO MUCH EASIER!” But it’s really the invention of artificial carmine that made lipstick a household product, for it finally allowed the product to be made cheaply in large quantities. Guerlain was the first company to make lipstick in a tube, though it was very expensive. It was in 1915 that Maurice Levy of the Scovil Manufacturing Company figured out how to mass produce lipstick, though formulas were still pretty primitive and made from ingredients that had a tendency to go rancid.

In 1923, the first swivel tube was invented, and industrious individuals continued to experiment and improve upon the product. Flappers took a page from the suffragettes and painted their lips crimson, and between that and the rise of Hollywood culture, where women would copy the lip looks of their favorite stars, like Clara Bow, lipstick finally entered a semblance of respectability and became something that most women wore. Max Factor, a Hollywood makeup artist at the time, capitalized on this by creating the first real mass market makeup brand, which still exists today.

By World War II, lipstick was an everyday part of a woman’s look. Even with wartime rationing, governments realized the importance of lipstick to keeping up morale on the homefront, where women were entering the workforce en masse to help the war effort. Lipstick was more expensive in this period, but it was still being produced even when other basic items, like shampoo, were not. Red lipstick was the center of the 1940s makeup look, because of the rationing of other makeup products, and because a swipe of red lipstick in the morning was easy for a woman to put on before a day at work. This is the trend that Peggy Carter is part of, and it’s part of the reason why, in 1946, she rarely—if ever—changes her lip color from her signature red, even when she’s in disguise. Peggy’s red lips come to symbolize the person she had to be during the war: tough as nails with no time for anything but work.

In season two, Peggy is wearing an entirely new wardrobe of lipstick colors—pinks, corals, and a dusty rose color that I’m pretty sure no one was wearing until the ’60s. Of course, this is in part because of the new locale, as the change in coasts has Peggy wearing a lot of brighter colors than she did in New York. This willingness to wear more unusual colors may also be reference to the Hollywood glamour that was to symbolize the 1950s makeup look, where makeup companies again had access to the resources to make more colors of lipstick, and where what Hollywood starlets were wearing set the trends. Even in the 1940s, Hollywood was considered a bit more relaxed and less conservative than the east coast, but these new colors also show us a bit of what Peggy is going through in season 2.

Hayley Atwell has gone on record saying that if season one is about Peggy trying to get past losing Steve Rogers, then season two is about Peggy trying to figure out who she is and how she wants to be during peacetime, and about her trying to move on with her life. Her lipstick 100% reflects this change in her demeanor. The red lipstick is brought out mainly when she’s on missions, when she has to be the Peggy that she used to be. Almost any scene with Jason Wilkes, one of her love interests, has her wearing a softer lip color. With Sousa, it tends to vary, depending on the scene and what’s happening in their relationship, but as the season goes on and their relationship develops, you do see her wearing a softer lip in her scenes with him. Even some of her scenes with Jarvis take on this significance, like in 2.07 when Jarvis starts to discuss her personal life with her, she’s wearing a very blush-like pink color. In the last episode, they even change her lip color from red to a softer coral-y red color. Essentially, in most scenes where Peggy is feeling most vulnerable, she’s seen wearing a softer lip color. In scenes where she feels confident and tough, or needs to feel like she is, she reverts back to her wartime red, and by her last scenes of the series, she’s seen wearing no lipstick at all, an indication that she is no longer afraid to be seen for who she is.