Lindsay Lohan Confuses Everyone by Auctioning a Fursona NFT 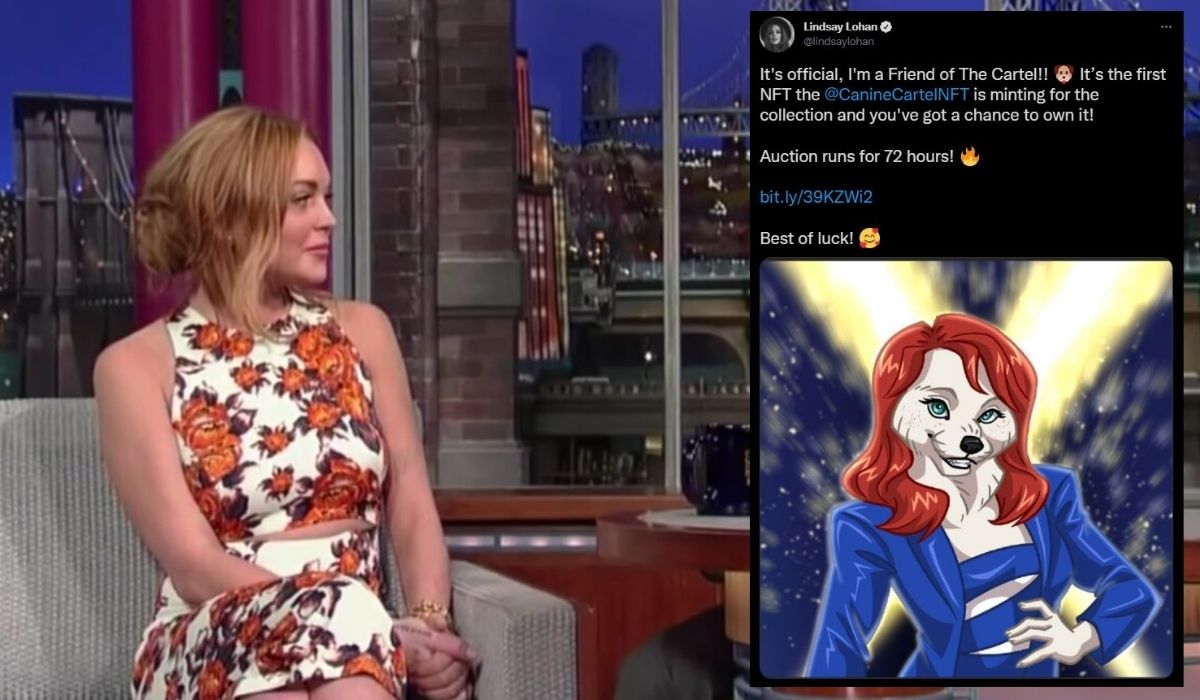 Every other day, something goes viral on Twitter.com because it causes collective confusion and sometimes anger.

What was it yesterday? The announcement from actress Lindsay Lohan that she joined a furry-focused NFT group and is auctioning off an NFT fursona (furry-themed avatar).

It’s official, I’m a Friend of The Cartel!! 🐶 It’s the first NFT the @CanineCartelNFT is minting for the collection and you’ve got a chance to own it!

The bidding for this NFT starts at a whopping $1,500 and is bid with ethereum cryptocurrency. A quick glance at her profile and one would see that Lohan has been involved in the NFT game for a minute—like, as far back as late May, when this new form of spending money on nonsense took off. Because this is her first time participating in the furry world and it is within the context of highly divisive money-making activity many think is a scam, those both in and out of the group had negative reactions.

‘lindsay lohan, furry, nft’ was not on my bingo card for this year

if not THE darkest timeline, definitely one of the bad ones https://t.co/anFXbWNpWv

It’s only been October for forty freaking minutes and Lindsay Lohan is now a furry. pic.twitter.com/XVvxIycYrD

Both in a Rolling Stone interview and online, furries took to dunking on the lack of furry attributes in the artwork.

Lindsay Lohan’s fursona trying to perceive the buzz growing around her pic.twitter.com/vdtWNbBasW

If you exist in any art or geek spaces online (me being both), you’ve probably come across furries. Furries are individuals (and a community) interested in anthropomorphic animals. While some furries believe they are part non-human and others explore the sexual side of the community, they represent the minority of furries, despite what popular culture will have you think. Furries exist in every fandom and are involved in non-internet spaces, too.

In addition to pointing out the lack of furry features, some pointed to the negative racial coding of the Canine Cartel working with Lohan—using a geographical reference “running every gang from here to Mexico,” guns, “a fiesta,” and more.

This world is turning to shit, can we please not pic.twitter.com/VlIEYCOY0W

Less understood than the furry community are NFTs. Short for Non-fungible-token, NFTs are exclusive digital items that amateur investors and the wealthy have taken to as the hot item to spend absurdly inflated amounts of money on.

While I am more baffled, more so I’m bracing for pushback within the art community. NFTs are a touchy subject, as many artists following the trend either love or hate NFTs. On the “pro” side, it gives artists another way to make money in a world that may emotionally depend on art, but financially devalues artists. Most of the already huge artists (like Beeple and Grimes) are making millions, while smaller artists are cracking into the hundreds and thousands—some turning a profit for the first time.

On the con side, artists have reported issues of their artwork being stolen from the internet and sold as NFTs. Navigating already outdated copyright laws is bad enough without adding a fast-growing market that can make millions from taking work from an unknowing artist online. Artists that are hard pressed to survive without being online or having digital papers share their work online. Many are also worried about the environmental impact of blockchain use in NFTs. Electric car company Tesla stopped accepting bitcoin currency (another product of blockchain) after news began surfacing of the coal factories restarted to support the power needs of mining bitcoin.

The “art world” generally has not taken kindly to NFTs because of its close connection with pop culture. Because the art market is so unregulated (considered the most lawless outside of the black market) and NFTs are built on imaginary worth/hype, they would get along quite well.

NFT culture is absolutely wild. Every day you’ll see a guy on here tell you with a straight face that he spent the entire day selling unenforceable ownership rights to an object that doesn’t exist and then when criticised will turn around and tell you he is actually the smart one

Despite Lohan’s involvement getting the big news because furries are still seen as a spectacle, she isn’t the only celebrity that announced an NFT exclusive. Lil Nas X, Bella Poarch, Curtis Roach, Brittany Broski (a.k.a. “Kombucha girl”), and a few other people (I’ve never heard of but must be big somewhere) are releasing Official TikTok NFTs. I’d imagine the criticism they face is less pronounced because they are working with a megacorp rather than using a largely queer and very misunderstood internet subculture for a quick buck.