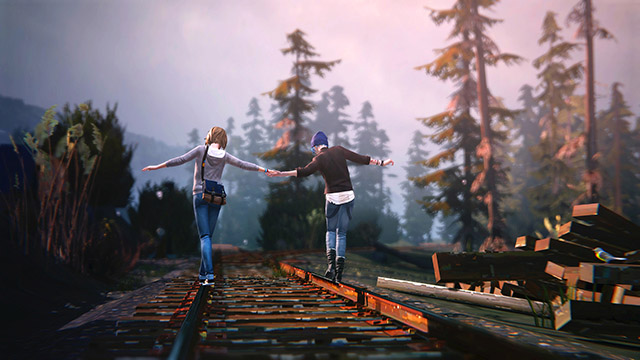 This article contains minor spoilers for Life Is Strange.

From the pages of my journal … this is Blackwell Academy, one day at a time.

Dear diary. Episode 1 hit me right in the feels for so many reasons. Life Is Strange is part girl-power high school story, part Telltale Games interactive adventure. You step foot in Blackwell Academy, a private school for seniors, where the choices you make determine the rest of your life—or at least the remainder of your high school career.

I meet Maxine Caulfield, and it’s like I know her. She sits in the back of the classroom, worried about what people might think of her if they read her journal. She dwells on how this rich snob Victoria made fun of her for answering a question wrong and how everyone laughed. She’s familiar because she was me; she is and was many of us. Who wasn’t a misfit in high school?

Max is a photography nerd. She loves getting behind the camera. But when it comes to participating in the moment, she freezes. Overwhelmed by school and its social pressures, she enters the noisy hallway after class and inserts her earbuds. Total silence. 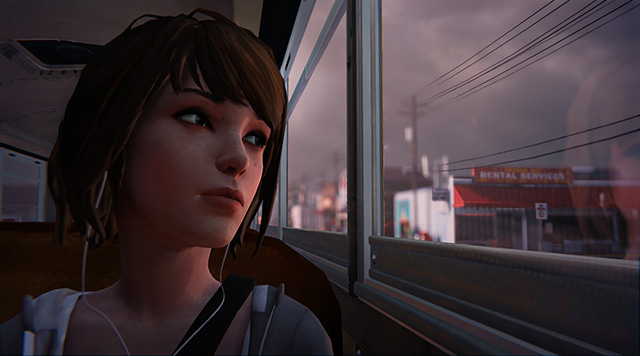 Adventure games are all about observing things—sometimes more than actually doing or interacting with things—and with Max, it makes sense. She watches more than she speaks. She looks at her classmates and introduces them to the player through internal dialogue. The short walk down the hall to the bathroom, where she can have an emotional breakdown in secret, is almost total sensory overload. The girls at her school are all different. Some are heavy, some are thin (yay for varied body types!), and some rock purple hair or wear expensive outfits. Max blends into the background, a shy girl in picked-off-the-bedroom-floor clothing, hiding behind her bangs.

I don’t think I’ve encountered a better video game depiction of the loneliness and screwed-up social demands of teenage life than Life Is Strange.

But something big breaks Max out of her shell: the ability to rewind time. We can all dream of a power like that. The chance to go back and say the right things. The chance to do moments over—or even to save someone’s life.

Max returns to Arcadia Bay and finds that the best friend she left behind five years ago is a much different person than she remembers. Chloe’s whole life and attitude (and hair color) has changed in that small but infinite time. Max leaving hit Chloe hard.

I know—and maybe you do, too—what it’s like to have your best friend move away and create a void in your life the size of a country. When you’re a teenager, it’s the end of the world. 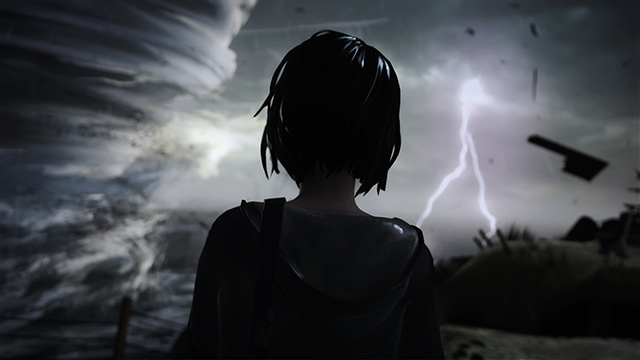 Episode 2: Out of Time

Dear diary. I’m not sure how many games deal with suicide, but it’s probably very few.

Heavy Rain is one. Depression Quest is another. Here, a young girl threatens to take her life because the bullying she endures gets so bad. She’s bullied by her peers, by adults, and by her classmates online, courtesy of a humiliating video that goes viral.

Cyberbullying is serious problem, so much so that it’s affecting almost one in four kids today. Really cool game developers like Pixelberry have dedicated time and effort to fighting this abuse after one of its players shared her plans to commit suicide.

Life Is Strange is a product of the escalation of our times. A kid brings a gun to school and causes panic. Kids bully each other so terribly that they want to end their lives before they’ve begun. It’s a reminder of how brutal growing up can be. And in the middle of it is Max Caulfield, doing her best to protect the people around her, even if she barely knows them, because a little good makes a big difference.

Max’s observations, so typical of this kind of interactive drama game, are unique in that they’re a testament to her character’s empathy. When she looks at a smashed-up car, she wonders if it reminds Chloe of her dad. When she sees a boat in a junkyard, she ponders who owned it, and where they are now.

The theme of Blackwell’s photography contest is everyday heroes. But if I think Life Is Strange is about anything, it’s not the big question of, what would you do if you had superpowers? The real question is, if your words and actions are as strong as superpowers, how will you choose to use them? How will they affect other people—complete strangers, or your best friend, for example? 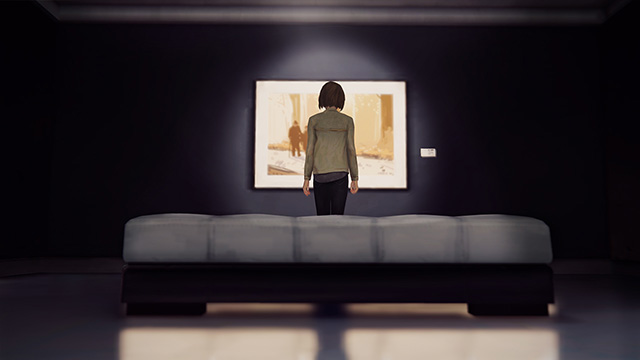 Dear diary. Life Is Strange makes me miss my best friends. Not the ones I have now, but the ones I used to have, years ago.

Watching Chloe convince Max to break into the principal’s office and the school swimming pool reminded me of one of my childhood best friends, long gone now, and how she was always so much more daring than me. Maybe we all had someone like Chloe that we admired, who balanced us out.

Some of my favorite moments in Life Is Strange happen when you sit and reflect. At Chloe’s house, you think about the things that mattered when you were kids—that still matter—like a swing you took turns on or the brand of cereal you both still eat.

Best friends are made of those little things. 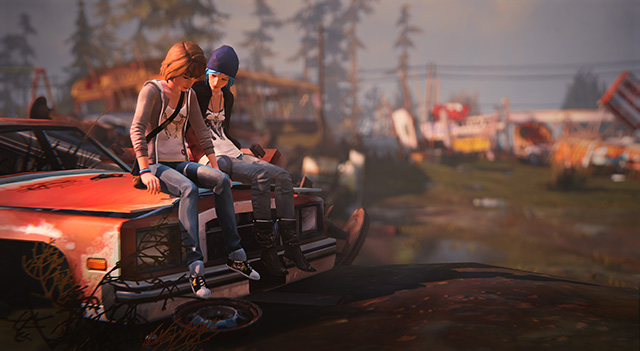 Dear diary. Life is strange. Really. Time powers and global warming are only one side of it. Shit happens, and life can change from amazing to agonizing in an instant.

Episode 4 was the most memorable installment for me, and it’s also where the story gets really weird and sad. Like changing the entire past and future weird. Like your best friend asking you to help her die sad.

It’s a reminder of what I’ve lost in life—what we’ve all lost at one point or another. Not just friends, but good friends. Amazing friends. Through simple acts of neglect. We drift away. We move away. We get caught up in our own lives and forget to call or visit. We become too “cool,” or too different.

That’s part of Max’s grief throughout the game. Chloe’s whole life has changed while Max was away from Arcadia Bay. Chloe even found a new best friend. But Episode 4 shows us a much worse cost to that separation.

When I was in college, I learned from my mother that someone I had been close friends with in high school had died in a car accident. I wasn’t sure how to react to that. I’m still not sure.

Life changes for our friends whether we’re there or not. Sometimes, as both Chloe and Max learn, life also ends. 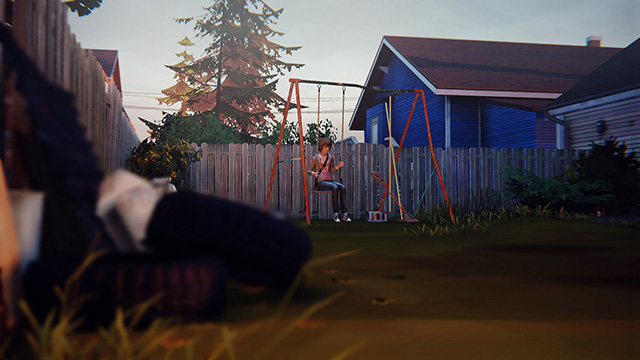 Dear diary. Episode 5 is kind of a mess. I’m all for heartfelt conversations, but the time for them isn’t when a monster tornado is inches away from obliterating your face.

Still, I loved it. Episode 5 finally explains the reason for all the Armageddon stuff afflicting the town of Arcadia Bay—dead birds, twin moons, beached whales. And it makes sense within the story.

Everything we do has a consequence in some way. That’s true enough of life. But the lesson that Max learns is one we all do. No matter how hard we try, sometimes we lose friends. Sometimes it just isn’t meant to be.

But our memories of the time we spend together—that’s worth holding on to much more than a lifetime of regret. We all think about what we did wrong, and what we could have done right. If only we’d apologized. If only we hadn’t been so petty. If only we had realized how hard it would be to find someone whom we could feel that close with again. True best friends are rare. We don’t meet people quite like them again.

The reality is, it happens to everyone. Life takes strange turns, and even if we patch things up today, sometimes we’re too different people to belong together anymore. And that’s okay.

Because the time we had—that’s what matters. After years, it remains special, a little part of who we are. And it’s a part that should be celebrated, not mourned. 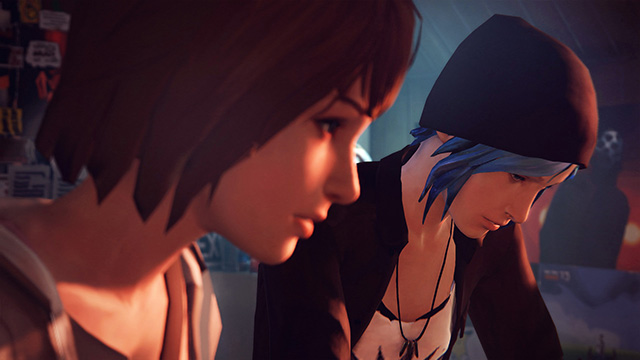 Life Is Strange is available for PlayStation 4, Xbox One, PS3, Xbox 360, and PC. It’s published by Square Enix and developed by Dontnod Entertainment.