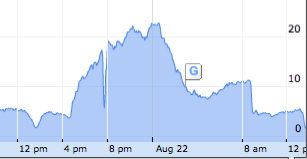 When the uprising against Libya’s long-time dictator Colonel Gaddafi began this past March, the country’s Internet connection went virtually silent. Things have been touch and go since then, but for the most part, the country has been disconnected. That seemed to change as rebels entered the city of Tripoli, and the country seemed to have access once again.

According to the BBC news, web traffic suddenly jumped 500% during the night, albeit briefly. Writing for the Renesys blog, James Cowie reported that the internet was sporadically available with low-bandwidth from between 2:00 AM and 4:30 AM. Hardly enough time to catch up on all the Nyan Cats and what not, but enough time to send Tweets and Skype messages reporting on the events within the country. After that, the entire country’s blocks of IP addresses completely vanished, only to return still blocked at the local level.

What is happening with the Libyan Internet connection is unclear; it could be that sympathetic forces are attempting to reconnect the company, or it could have been a simple technical snafu. However, Cowie notes that when the website for Libyan Telecom and Technology, the company responsible for most of the country’s Internet access, came back online it carried the message, “Congratulations, Libya, on emancipation from the rule of the tyrant.”