When I was a teenager in the nineties, I frequented the local Suncoast quite often, using my paychecks to build my anime VHS collection until the entire Dragon Ball Z cast had their faces lined up on the side of the box. While there, one of the employees took my hand (figuratively) and opened my eyes to everything that was being edited out of the stories I’d watch weekday afternoons. Missing out on the violence or Goku going to hell and not the Home For Infinite Losers wasn’t all that surprising, but the stuff that got removed out of Sailor Moon and how queer it was?

Well, honestly? That wasn’t all that surprising, either, but what did stick with me was the fact that Sailor Moon, and other anime, had portrayals of queer characters who weren’t just side characters, who weren’t constantly bullied for being gay, who were seen as assets to the team, and whose story didn’t end in tragedy. That’s not to say they didn’t go through hardships, but their struggles had little to do with being “the gay one” and had everything to do with “you’re a soldier of love and justice and the world is ending.”

They were allowed to just be, and that’s something that’s stuck with me for a while.

This, and other topics that revolve around anime and queerness, is what I had the pleasure of discussing with six queer voice actors working in the industry today. Each has their own unique experience in regards to being someone who fell in love with anime and its themes, pivoting toward it becoming their career, and working to inspire other queer fans to love themselves and believe in themselves enough to follow the path they want in life.

Full disclosure: growing up in a time where queer content was cut out of anime, treating it like every other “too adult” occurrence such as violence and smoking, only to be speaking with queer voice actors who are working behind the scenes to be truthful to the queer community’s experiences is pretty surreal. I’m forever in awe that this is something I got to take part in, and I hope it’s something that inspires queer anime fans to be true to themselves in our community.

In case you aren’t familiar with the amazing talents in this video, here is a breakdown of who they are: 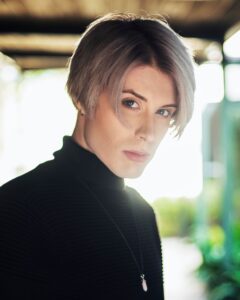 Daman Mills is a voice actor working in anime and video games. He’s best known as one of the voices of Frieza in the Dragon Ball Z franchise (select titles), Weiss the Immaculate in Final Fantasy VII: Remake, Cherry Blossom in SK8 the Infinity, Jyugo in Nanbaka, N in Pokémon Masters, Titus in Borderlands 3, Hamon the Blacksmith in Monster Hunter Rise, Mustard and Moonfish in My Hero Academia, Kai in Beastars, Douglas Bullet in One Piece Stampede, Shirazu in Tokyo Ghoul:re, Chika Kudo in Kono Oto Tomare: Sounds of Life, Mabu in Sarazanmai, Leonardo Lionheart in RWBY, Midorima in Kuroko’s Basketball and many more! 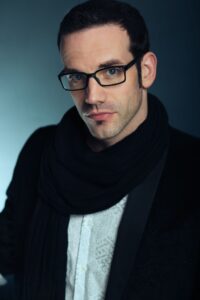 Nurtured on anime classics from the tender age of Star Blazers, et al, this reclusive actor/writer spent more years than he cares to remember in what might charitably be called free-fall before landing, mostly by accident, smack dab on the industry of his dreams. To this day, some believe the small crater made by the impact remains the source of his power.

Cast as Rikichi in 2005’s Samurai 7, Tatum’s inexplicable luck has held long enough to see his flag hoisted on a slew of dream roles, most notably Kyoya Otori in Ouran High School Host Club, suave, demonic Sebastian Michaelis in Black Butler, France in the Hetalia franchise, Tomoe from Kamisama Kiss, and the equal parts maniacal/vulnerable Okarin Rintarou from Steins;Gate. More recently, Tatum can be heard in the epic My Hero Academia as Teyna Iida.

Other characters the man still can’t believe he’s had the crazy good fortune to play include Doumeki in XXXHolic, Jiro Mochizuki in Black Blood Brothers, Isaac Dian in Baccano!, both God Eneru and Dalton in One Piece, Komui Lee in D-Gray Man, Dororo in Sgt. Frog, the titular loveable savage of Heroic Age, Ryosuke Takahashi in Initial D, Lawrence Kraft in Spice and Wolf, Zarbon in Dragon Ball Z Kai, and Scar in Full Metal Alchemist: Brotherhood. His vocal “stylings,” much to the chagrin of drama teachers everywhere, he’s sure, have also been featured in Romeo X Juliet, Speed Grapher, Trinity Blood, Kenichi: The Mightiest Disciple, Black Cat, Nabari no Ou, Ghost Hunt, School Rumble, The Tower of Druaga, Aquarion, Tsubasa: Reservoir Chronicles, Shuffle, Shigurui, Glass Fleet, Mushishi, Soul Eater, along with feature-length films such as Vexille, Summer Wars, Dragon Age: Dawn of the Seeker, and Empire of Corpses, among many others. His videogame credits include Sir Hammerlock from the Borderlands franchise, Julius Kresnik from Tales of Xillia 2, Mr. Foster from Killing Floor 2, Kelvin and Pendles from Battleborn, and fifteen playable characters from SMITE.

Ever the workaholic, Tatum is currently burning the midnight oil on a number of exciting projects due for release later this year. And before you ask, the “J” stands for… Well, it stands for whatever you’d like it to. 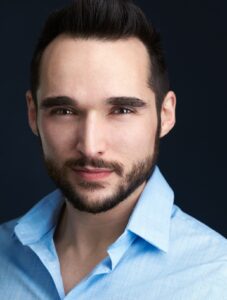 Brandon McInnis is a Los Angeles-based voice actor most well known for his roles in anime and video games, such as Sir Nighteye in My Hero Academia, Gen in Dr. Stone, Finral in Black Clover, and Featherlight in World of Warcraft: Shadowlands. When not acting, he produces music on Spotify and YouTube inspired by the roles he’s played, and comedic voice acting content on TikTok. 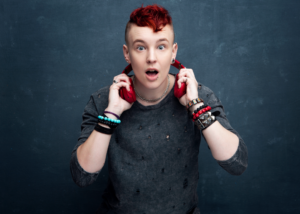 You may have heard him as foul-mouthed, under-caffeinated NPC Lorelei from Borderlands 3, or even as various FUNimation simuldub characters [MARS RED, ASTRA: Lost in Space, Infinite Dendrogram, Wonder Egg Priority, and more] — but IRL he’s Ciarán Strange, an eccentric transgender/non-binary voice actor, Twitch affiliate, sci-fi author, mental health advocate, indie rocker, and multimedia artist. At the tender age of seventeen, he left his family, friends, and English fishing village behind in order to chase his dreams across the Atlantic!

The bed-headed redhead has become a familiar face throughout the American geek scene, in most parts via his music. After touring the US, UK, Canada, and Japan, performing at hundreds of shows, conventions, and festivals, Ciarán joined forces with kindred artistic spirit Dave Kitsberg (Spoony Bards, Time Crash). The two are now delving into geeky covers and parodies, as well as writing fresh original concept material in all sub-genres of pop-rock.

Musical ventures aside, this British import to the States has been swept up in the launch of his LGBTQ+ urban sci-fi series. The series’ debut novel, Black Tie by Ciarán Strange, is a M/M political thriller he’s pitched as “gay James Bond navigating a world of superheroes.” An audiobook version [starring Jesse Nowack, Dani Chambers, Mike McFarland, Elisa Melendez, Ricco Fajardo, Brandon McInnis, Daman Mills, Tyson Rinehart, Emi Lo, Elizabeth Maxwell, Danielle McRae, and many more of your favorite voiceover stars from anime and gaming!] is due out Summer 2021.

In what little free time he has, Ciarán streams video games and digital drawing on his Twitch channel, TheCoffeeCommander; its dedicated fans pushed him to affiliate status within one week and continue to passionately support him. He enjoys musical collaborations, wrestling, and fitness, living the doggo dad life, and promoting cosplayers and artists within the fandom! 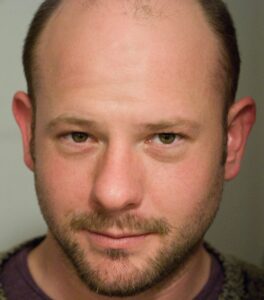 David Wald has voiced roles in titles including Fairy Tail, My Hero Academia, Dragonball Z, Attack On Titan, SK8 the Infinity, Akame Ga Kill, and numerous others. As an ADR Director, he has helmed titles including Tada Never Falls In Love, Kokkoku, and Cutie Honey Universe. For the last several years, David has been a prominent voice in favor of rendering English adaptations of anime titles that focus on the LGBTQIA+ experience. As such, he has directed, adapted, and/or assisted with titles including Adachi & Shimamura, Kase-san and Morning Glories, Love Stage!!, Hitorijime My Hero, and Bloom Into You. 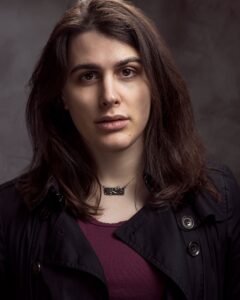 Meli Grant is a classically trained actor who grew up in New York and received her BFA in Drama from NYU’s Tisch School of the Arts. She can be heard in a number of anime and video game titles, including Dragon Ball Super, My Hero Academia, Fairy Tail, Borderlands 3, and SMITE. Currently, you can hear her as Yukimitsu Mochizuki in Skate-Leading Stars, airing weekly on Funimation. Her love of the arts has always been one of neck-deep involvement where possible. To that end, while she’s been voice acting since 2015, exploring both female and male roles along the way, she is also self-taught in ADR script adaptation and timecoding, and has been actively pursuing a greater understanding of both directing and casting, in hope of bringing more of herself and her experience to this medium in the future. She is also trans.

Thank you for checking out the video, and Happy Pride!