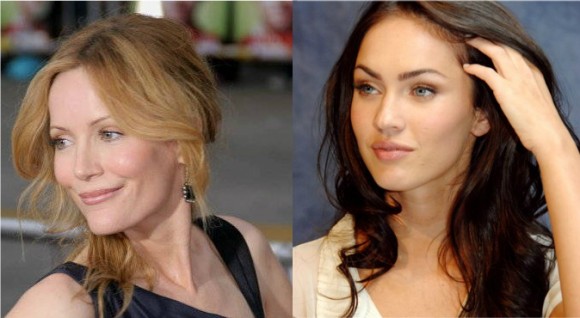 Leslie Mann, that very funny lady who has been showing up in various comedy roles since her feature film debut in 1996’s The Cable Guy and is known as one of the most reliable comedic actresses of our time, was asked about details surrounding the Knocked Up spinoff that will feature the couple played by herself and Paul Rudd. Not much has come out concerning the new movie, which is set to be released next year, but we do know that both Annie Mumolo (co-writer of Bridesmaids) and Megan Fox are in it. Well, we know that the former of those women, for sure, has proven her comedy chops. But what about Fox? According to Mann, she’s doing just fine. Actually, better than fine.

When asked about the highly secretive movie by MTV’s Movies Blog, Mann wouldn’t divulge much because if she gave away too many details, no one would be interested in seeing the movie. (Said Apatow in March, “[I]f you already knew what it was about for a year and a half, you wouldn’t even want to see it.” Good point.) However, she did say that her co-star, the unlikely comedy actor Megan Fox, was holding her own on the set.

“Megan Fox is so funny … She’s hilarious. You wouldn’t, I don’t know if other people [expect it], but I think she’s really funny, you’ll be pleasantly surprised.”

I love it! As someone who does comedy and has seen several people unexpectedly perform it really well, I’m actually looking forward to seeing Megan Fox as part of a Judd Apatow comedy. Especially when I hold his movies in such high regard, and even more especially on the weekend we’re celebrating the 100th birthday of Lucille Ball. I think it’s great to see more and more women from other genres tapping into their comedic potential, even if they’re not completely successful at it. But when they are? That’s awesome! (And actually, Fox was great in Jennifer’s Body.) And if Leslie Mann says she’s hilarious, then I’m going to trust her. Yay, comedy sisterhood!