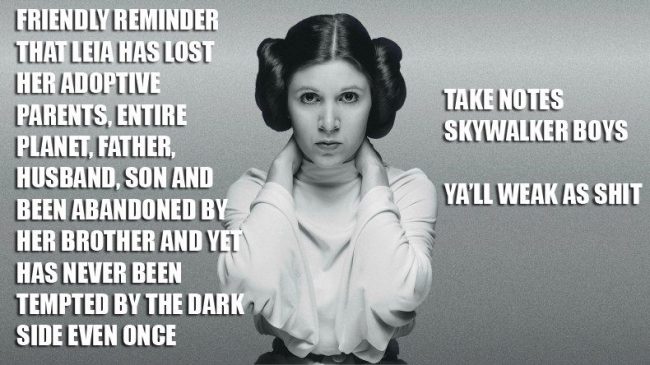 One of the things Star Wars fans are looking forward to most in Rian Johnson’s The Last Jedi is the final performance of Carrie Fisher, who as we all know passed away after filming this installment, as Dr. General Princess Leia Organa PhD. According to Johnson, a major element in her story will be her relationship with our new favorite resistance pilot, Poe Dameron.

Sadly, we know for a fact that The Last Jedi will mark the last time we see Leia on-screen, as Lucasfilm’s Kathleen Kennedy confirmed that the script for Episode 9 has been started again from scratch, and Leia won’t be written in. However, Johnson told Entertainment Weekly that “watching [The Last Jedi], there’s going to be a very emotional reaction to what she does in this movie.”

Apparently, whatever Leia does in this film, having not been altered or changed in any way after Fisher’s passing, will nonetheless affect the franchise for years to come regardless of her never appearing in a Star Wars film again.

Her relationship with Poe, who will be emerging as a Resistance leader, is a part of that, and Johnson explains that after the betrayal she’s experienced with her son killing his father and her great love, Han, she begins to see Poe as sort of a surrogate son.

“I think she sees in him the potential for a truly great leader of the Resistance and beyond,” he says.

Meanwhile, Oscar Isaac revealed in talking to Entertainment Weekly about his role that, “Poe’s arc is one of evolving from a heroic soldier to a seasoned leader, to see beyond the single-mindedness of winning the battle to the larger picture of the future of the galaxy. I think Leia knows she won’t be around forever and she, with tough love, wants to push Poe to be more than the badass pilot, to temper his heroic impulses with wisdom and clarity.”

The Last Jedi will quickly be putting Poe and the rest of the Resistance to the test, as Johnson promises immediate pressure being put on them by the First Order after the events of The Force Awakens.

Star Wars: The Last Jedi is set to premiere December 15, 2017. What do you hope to see in Leia’s final appearance in the franchise?

(via /Film, image: the Internet/Lucasfilm)