Review: 'The LEGO Movie 2: The Second Part' | The Mary Sue

LEGO Movie 2 Review: How Do You Stay Awesome in a Less-Than-Awesome World? 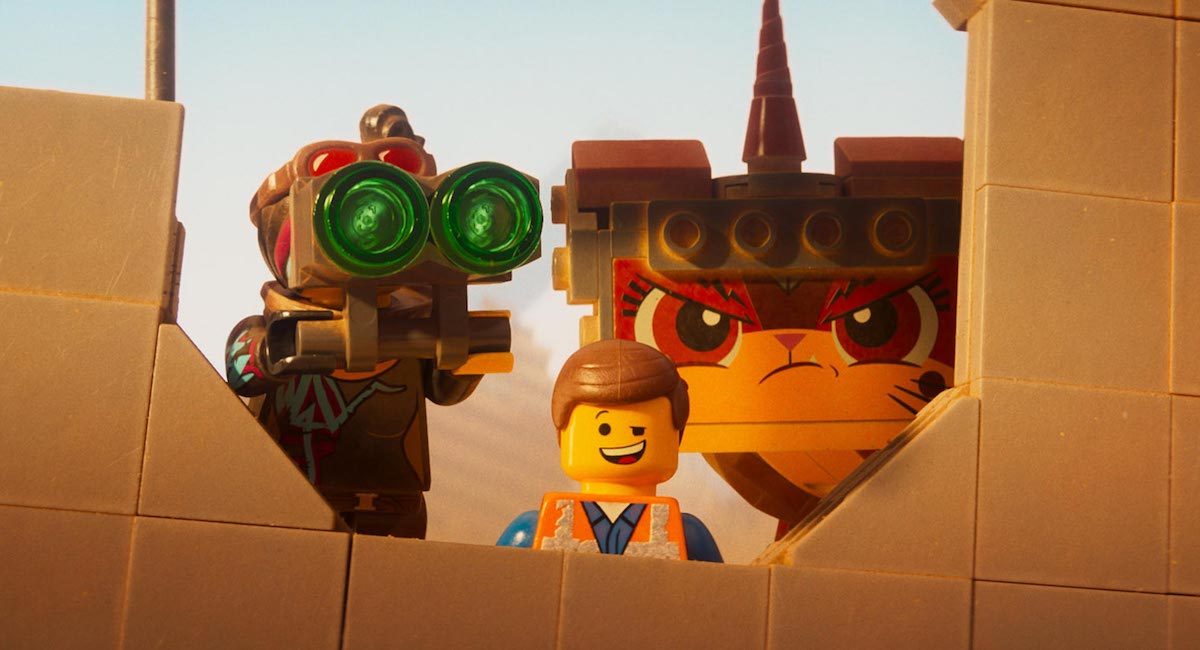 Back in 2014, The Lego Movie took us all by surprise by being infinitely better than pretty much anyone thought a movie about LEGOs could possibly be. It was adorable and genuinely hilarious, but also smart enough to keep the adults in the audience engaged throughout. It was also almost shockingly political, essentially taking on capitalism itself as the film’s central antagonist.

It was always going to be difficult for The Lego Movie 2: The Second Part to live up to the original, if for no other reason than that the first movie took us by total surprise, setting our expectations high for the sequel. And while this movie may not be as smart or subversive as its predecessor, it does still have those qualities in abundance. (It’s also, arguably, just as funny.)

Five years after the end of The Lego Movie, Bricksburg has been transformed into a bleak, apocalyptic wasteland. After a series of attacks by Duplo-brick aliens from the Systar System, the citizens of the now appropriately redubbed “Apocalypseburg” have shunned anything shiny, happy, or poppy for fear of attracting the aliens.

The new world has hardened almost all of the characters we loved in the first movie. Lucy/Wyldstyle (Elizabeth Banks) has become even more of a master brooder. The adorable Princess Unikitty (Alison Brie) is now a shapeshifting feral monster. Only Emmet remains unchanged, blithely bopping along, believing everything to still be awesome.

The changes in the world are, like the first movie, the result of the events happening in the live-action house of a boy named Finn. At the end of the original, Finn’s father (Will Ferrel) insists that he let his sister Bianca (The Florida Project’s Brooklynn Prince) play with him. Years ago, Phil Lord and Chris Miller, having heard criticism that the first movie didn’t excel in female representation, announced that the sequel would be all about exploring conscious and unconscious gender biases in relation to toys.

While gender plays a role in the relationship between Finn and his sister and the ways in which Bianca plays with her toys, the issue is really more about the age difference between the siblings. Bianca just wants to play, disregarding Finn’s more mature storyscapes and infuriating her brother. The constant fighting between the two forces their mother (Maya Rudolph) to threaten to put all the toys in storage if they can’t get along. It’s an interesting premise, if less political than its predecessor’s critique of capitalism.

But that doesn’t mean the movie doesn’t get deep. The film’s villain is the shapeshifting Queen Watevra Wa-Nabi (Tiffany Haddish), who kidnaps Batman, Lucy, and a few other Lego characters to attend a wedding—a very young-girl thing to do with your brother’s LEGOs, to be sure. It turns out that wedding is slated to be between Queen Watevra and a hapless Batman, and the queen has been using catchy, poppy music to brainwash other LEGOs into finding contentment in her happy, glittery world.

But while Watevra may be the main antagonist, the real conflict of the film is the internal struggle of hope vs. cynicism. On his journey, Emmet is aided by a rough-and-tumble ally named Rex Dangervest, a dark and mysterious dinosaur-wrangling tough guy also voiced by Chris Pratt.

Dangervest, then, gives the impression of being the delightfully meta personification of Pratt’s career arc since the original LEGO movie, and what we’re given is a tale of two Pratts—Parks & Recreation’s loveable Andy Dwyer seeking mentorship from Jurassic World’s Owen Grady. And sure, a spaceship full of dinosaurs is cool and all, and Grady has a lot to offer in a mission to stop Armageddon (or, in this case, the “Our-mom-ageddon”), but boy do I miss the sweet and persistently amiable Andy.

The question, then, is how to survive as an Emmet in a world of Rex Dangervests? A Bianca in Finn’s house? A Masterbuilder in a world that’s suddenly telling you that you need to be a Masterbreaker—to tear things down rather than build them up—to survive? These are the questions The Lego Movie 2 asks. The movie is funny and silly and every kid in the theater around me was having a total blast. But the film’s core is a profound discussion of how to retain optimism in an increasingly cynical world.