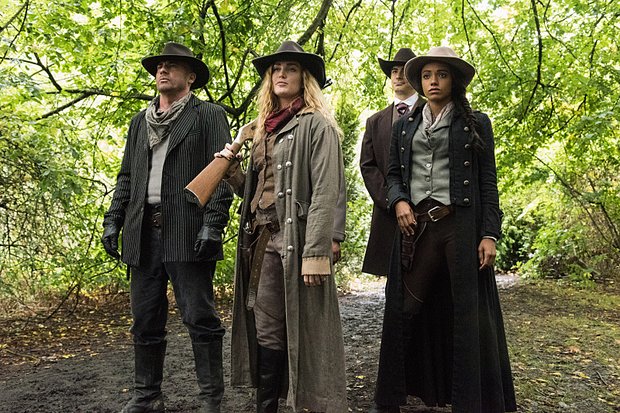 The CW’s Legends of Tomorrow didn’t exactly have the best start. It placed its biggest draws on its connection to DC’s Arrowverse, and that made sense as a spin-off of Arrow and Flash. Both shows have had problems throughout their runs dealing with cast bloat as more and more heroes have been added in. A new show with established side-characters as an ensemble cast anchored by Doctor Who veteran Arthur Darvill playing Captain Rip Hunter seemed like a pretty good way to give the parent shows some breathing room and allow for further development for these characters. With new additions from the comics filling in the gaps, Legends started with a lot of promise.

If the pilot was a running jump, the rest of the first season was a plunge into the mouth of a volcano. The Hawk-duo had some creepy Golden Age baggage with Hawkgirl’s “destiny” to reincarnate through all of history and fall in love with the aggressive and stand-offish Hawkman over and over. The team was frustratingly unable to do anything to antagonist Vandal Savage, so Savage had to be written as incompetent enough to give them ways to survive his counterattacks. There were plot holes in the main story big enough to drive a time-traveling spaceship through.

If you stuck around for season two’s start, you did so because of the characters that were left, and you probably would have wondered why you were still watching. You would have also quickly found yourself watching a show that put one of the most prominent portrayals of a bisexual superhero in media front and center.

With Hunter’s disappearance, Sara Lance, a.k.a. the White Canary, took over as team leader. “Our show is an ensemble, it’s definitely like a stew,” stated executive producer Phil Klemmer in an interview with Empire Magazine, “and I think it was pretty clear to us that Sara was emerging as a sort of de facto captain-in-waiting character.” One of Legends’ positives is that it’s a genre show that’s never shied away from keeping the audience well-aware that Lance is part of the LGBTQIA community and giving her substantive plotlines. When she hasn’t been telling closeted nurses in the 50s about how open and accepting the future is, the other characters are happy to step in and let you know of her sexuality. More than that, Caity Lotz plays Lance in a way that’s definitively bi. Sara comes to the show with a relationship with Green Arrow behind her. In season one of Legends of Tomorrow, there’s a romantic arc between Lance and Captain Cold that slow-boils up until they share a kiss right before his death. Lance’s same-sex relationships are never turned into exploitative grabs for views. Both the writers and the actor are comfortable with her sharing romantic screentime with women as well as men.

From being accused of witchcraft for “corrupting” women in Salem to making out with Guinevere, season two not only continued on with this trend, but did so with a light carelessness that’s a breath of fresh air. Legends knows when to inspire with the character, but also avoids the pitfalls of only having Sara around to do morality plays about LGBT issues. The show allows her be her own character, with the genre-typical episode-long romantic interests that are gone by the start of the next story and her own faults and apprehensions that help move the plot along.

With her status as team captain, not only is all this magnified, but she also oversees the other Legends better than Hunter, something he outright states in the last episode of S2. Lance isn’t too high-and-mighty for the gaggle of unimportant-to-the-timeline-rejects around her like Hunter. Instead, she causes problems as much as she fixes them, often motivated by her self-doubt and grief over her sister’s death. This really makes the absurd scenarios that happen in season two that much more enjoyable.

Legends has improved so much from season one to season two because they’ve turned in towards the curve. Things are fun now after season one’s loftier plotlines about reincarnation, genocide, and doomed families failed to stick the landing. Legends has become a show about misfits blundering their way through history and doing their best to strangle the timeline back into place. In an interview with IGN about season two, Klemmer said:

By pushing Lance to the forefront and allowing her to naturally fill that role as leader, the show runners have both helped shift the entire trajectory of the show away from its original path and naturally placed a bisexual character on the forefront based on her own arc. They’ve not let any potential backlash over her orientation dissuade them from making the best possible choice for their show.

It doesn’t seem like much of a stretch to say that Lance will help deliver another season of entertainingly self-aware time-travel nonsense in season three. Hey, she’s a trendsetter. There’s another show planning to place a time-travelling bi woman as its lead really soon …

Daniel Ryan Alarcon is a fiction writer who gets into huge rants about comics at the drop of a hat, can’t help but get enthused by every new pen-and-paper system he comes across, loves cartoons in all forms, and is chomping at the bit to tear through the implications they all have when it comes to gender, orientation, and political themes. You can reach him at [email protected] .