The Legend of Tarzan: How Do You Review a Movie That Makes Absolutely No Impression?

Living at the crossroads of uncomfortable and unmemorable. 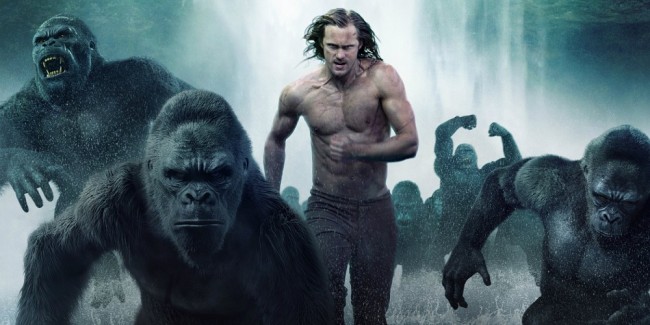 Against all expectations, The Legend of Tarzan, despite certain odd stylistic decisions, is engaging, practically riveting; with its coy sense of irreverence and eye-catching visuals, you won’t be able to get this one out of your head for a while.
Wait, no, that’s the music video for Toy-Box’s “Tarzan and Jane.”

The Legend of Tarzan is garbage.

True Blood’s Alexander Skarsgård stars as the King of the Jungle in this joyless, soulless Hollywood actioner, directed by David Yates, director of four Harry Potter movies that aren’t Prisoner of Azkaban, so nice try, fella. Yates, along with screenwriters Adam Cozad and Craig Brewer, attempts to mix up the Tarzan mythos by setting his film after Tarzan—real name John Clayton III—has returned to his late parents’ home country of England, leaving (some of) his wild ways behind. Alas, the end result is still generic and entirely unmemorable: I know there were some action scenes, some flashbacks and some quieter character moments strung together in a vaguely linear fashion, but damned if I can pick out more than one or two specific instances of things I actually liked. (One example: The bad guy’s weapon of choice is a rosary, which he uses as a whip. At one point it’s wrapped around Tarzan’s throat and he flexes his neck muscles in order to snap it. It’s a move reminiscent of The Rock flexing his way out of a cast in Furious 7, aka the single greatest movie moment of the 21st century so far. I liked that, because it was ridiculous, and this movie needed more of that. The Legend of Tarzan, follow Toy-Box’s advice and get funky.)

As for the “not like” column, I’ll take “white savior complex” for $200, Alex. In this version of Tarzan, the eponymous vine-swinger is lured back to the country of his birth by Leon Rom (Christoph Waltz), who works for Belgium’s colonialism-minded—and completely broke—King Leopold. Rom needs diamonds from Djimon Hounsou’s Chief Mbonga so that Leopold can pay his troops; Mbonga, in return, wants Tarzan, against whom he holds a grudge for an at-first unspecified, yet completely predictable, reason.

Tarzan goes back to the Congo, yada yada yada, saves the indigenous people from slavery. The way it’s done is… uncomfortable. All of the actual Congolese characters just fall in line behind him, immediately accepting his superior knowledge and ability to drove the colonialists out. And look, I get that Tarzan, at least in this incarnation, is essentially a superhero, but when you have a movie set in Africa where all the POC characters are little more than cardboard, present solely to revolve around Tarzan’s buff, blonde star… that’s not a good look.

Similarly lacking are Tarzan’s female characters, or should I say character, because barring a few actresses with two or three lines, Margot Robbie’s Jane is it. You can tell Warner Bros. got the memo about how “people really like those, erm, whaddayacall ‘em, those Strong Female Characters now.” The scene of Rom telling a kidnapped Jane to scream, and Jane derisively responding “like a damsel?” before spitting in his face got prominent trailer placement. And Jane is introduced as a headstrong character with her own agenda. When Tarzan sets off to the Congo, she refuses to be left behind. She grew up there, too, she explains to him, and in the years since coming to England she’s chafed against the buttoned-up reserve and lack of excitement just like he has. It’s a decent start. But maybe the writers could have stopped patting themselves on the back for that “damsel” line long enough to actually write something for her to do during the rest of the movie that’s not “be toted around from place to place” and “watch men do things.” Just a thought.

Ultimately, this movie is pointless and utterly unmemorable—it doesn’t even have “well, it’s kind of stupid, but totally Netflixable in a year or so” going for it. All the actors deserve better, and so does the audience. Just watch “Tarzan and Jane” on a loop for two hours instead.

Rebecca Pahle is the Associate Editor at Film Journal International and Features Editor at Pajiba. You can find more of her work on Cinefeels.