The Legend of Korra Newbie Recap: “The Coronation” 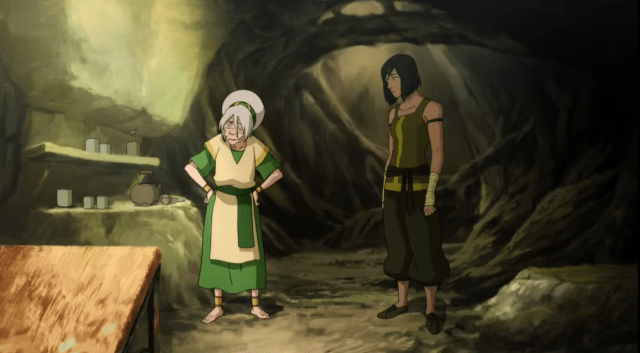 This episode starts with Wu going over the plans for his coronation in a very Stefon-like manner. “This coronation has everything. Badger moles. Crowns. Boulders with women inside them.” Everyone but everyone agrees that Wu is a god-awful example of what royalty should be, but he’ll have ministers on-hand to do the actual ruling, so he shouldn’t fuck up the country too bad. Meanwhile, the President assures a dubious Mako that Kuvira will have no qualms about giving up her power once Wu takes the throne. She pinky promised! Suuuuuuuure.

Kuvira shows up in Republic City with Bolin, Bataar Jr., Varrick and the rest of her merry brigade in tow. There’s a brief, semi-awkward reunion between Bolin and Eska that’s interrupted when a hotel employee informs Eska that, whoops, we booked you and your brother Desna in a room with one bed. She responds that that’s not a problem … because Desna sleeps in the tub.

Whew. Kinda thought that was going in a different direction for a minute, there. 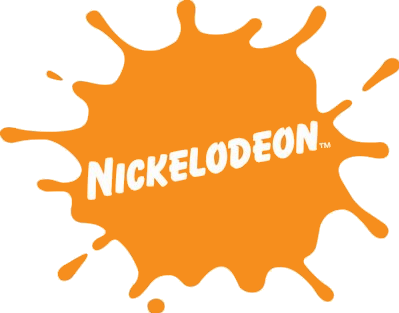 Mako and Bolin catch up, Bolin telling Mako about how great and wonderful and helpful Kuvira is, Mako bringing Bolin up to date on the missing Korra situation. Su and Bataar’s reunion is less pleasant, with Su all but accusing her son’s future wife of being an evil dictator. Meanwhile, Kuvira gets Wu pushed out of the Presidential suite for being a weenie.

The time comes for the coronation, and Wu is horrified that it’s a very low-key affair, due in part to a lot of the Earth Kingdom’s ceremonial items—including its crown—being looted during its teenage anarchy phase. Kuvira is granted an award for her service to the Earth Kingdom, and in her acceptance speech says thanks, this means a lot to me, oh BTW monarchy is archaic, I’m in charge now, any other world leaders try to mess with me and I’m going to kick their asses.

Afterwards, Bolin confronts Kuvira about how literally taking over the Earth Kingdom and threatening to start a war with anyone who opposes her is a bit … much … maybe … ? But she reassures him—Wu is a fucking idiot, after all, and wouldn’t she be a better leader than him?—and he believes her, because he really is that gullible. Still, you can tell he’s getting less and less confident in Kuvira’s ability to not be a power-mad dictator. Su comes up and straight-up accuses Kuvira of being a fascist, which in turn prompts Kuvira to threaten Zhao Fu.

Mako and Bolin talk again, and it’s more of the same—Kuvira’s a dictator!  No, she’s a populist leader working for the good of the people! She’s threatening the other world leaders! No, she just wants Earth Kingdom be ruled by one of its own and not a puppet installed by Republic City! In fact, Bolin argues, Kuvira is basically like Korra: It’s hard for people to connect to her sometimes because she can be a little intense, but she really has her people’s best interests at heart. 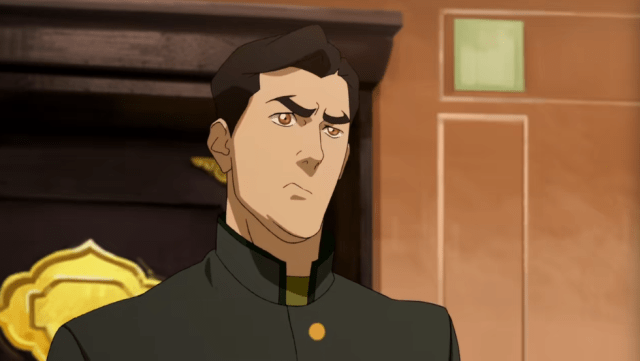 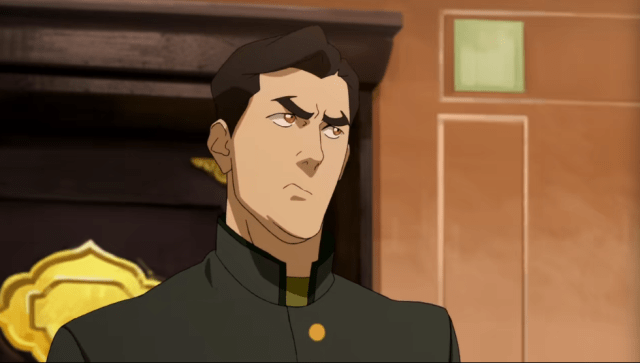 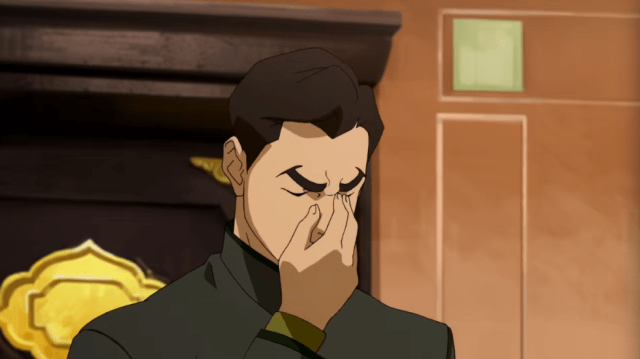 I need this tattooed on my eyelids.

Meanwhile, Korra’s over in the swamp bonding with Toph, who has mellowed somewhat in her old age. HA no. Korra’s a dipshit and being the Avatar doesn’t matter because it’s not like you’re gonna get rid of evil people—I’ll train you because I like beating people up, but it’s all useless, JSYK. After several sessions of Korra getting her ass beat, Toph off-handedly mentions that, by the by, you might suck so much because you still have some of that metal poison in your system. It’s no wonder Su and Lin didn’t pick up on it, she says, because her daughters were never all that good at metalbending to begin with, bless their hearts.

Toph’s unable to get the metal out because Korra can’t unclench her spiritual sphincter for five damn seconds. Toph tells her to calm down, and she’s very

Did I just want an excuse to use a Hocus Pocus gif? … Maaaaaybe. Anyway, Toph tells Korra that she has waaaay too many issues, and Toph doesn’t like those things that humans have … you know … emotions … so Korra’s going to have to figure shit out on her own.

Wu, whom I’m starting to feel a bit sorry for, goes to do some therapy shopping with Mako, only when he gets to the market he sees that everyone loves Kuvira and hates him. He has a little meltdown in the food court (also a recreation of Ba Sing Se’s throne room), and Mako gives him some tough love, asking him why he even wants to be king when he appears to have zero interest in what happens to his people.

(I want a sitcom where Mako and Wu share an apartment in New York. Mako is a beat cop and Wu is an unemployed Instagram addict/trust fund brat who pays all the rent for their Williamsburg apartment. Bolin is the kooky neighbor who lives at the end of the hall and Korra is the character who everyone talks about but whom the audience never actually sees. Forever and ever amen.)

We end this ep with a few loose ends: Tenzin sends Ikki, Meelo and Jinora off to find Korra, because Jinora’s done a pretty damn good job of solving problems adults can’t crack before. And we learn that Varrick, under Kuvira’s instrution, has been doing some sort of funky experimentation on spirit vines that will probably mean no good for Team Avatar. 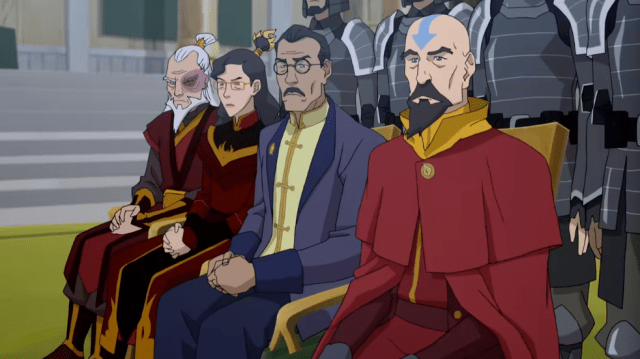 I see you there, Zuko and Izumi!