Texas lawyer Rod Ponton’s experience with a feline Zoom filter during a hearing went instantly viral, and for good reason. The kind of organic Internet sensation that speaks to its time, Ponton’s now-iconic clarifying phrase—“I’m not a cat”—and his unintentionally hilarious “courtroom” appearance will go down in the history of online. If this doesn’t make you smile in our broken plague world, I’m not sure what will.

When the virtual hearing begins at the 394th Judicial Court, presided over by Judge Roy Ferguson, Ponton appears in the bottom right corner as an adorable kitten with a discomfited lawyer trapped behind its eyes. In the short video, the legal eagles around Ponton somehow manage to stay professional and somewhat straight-faced as the now-immortal moment unfolds and Ponton struggles to remove the filter. 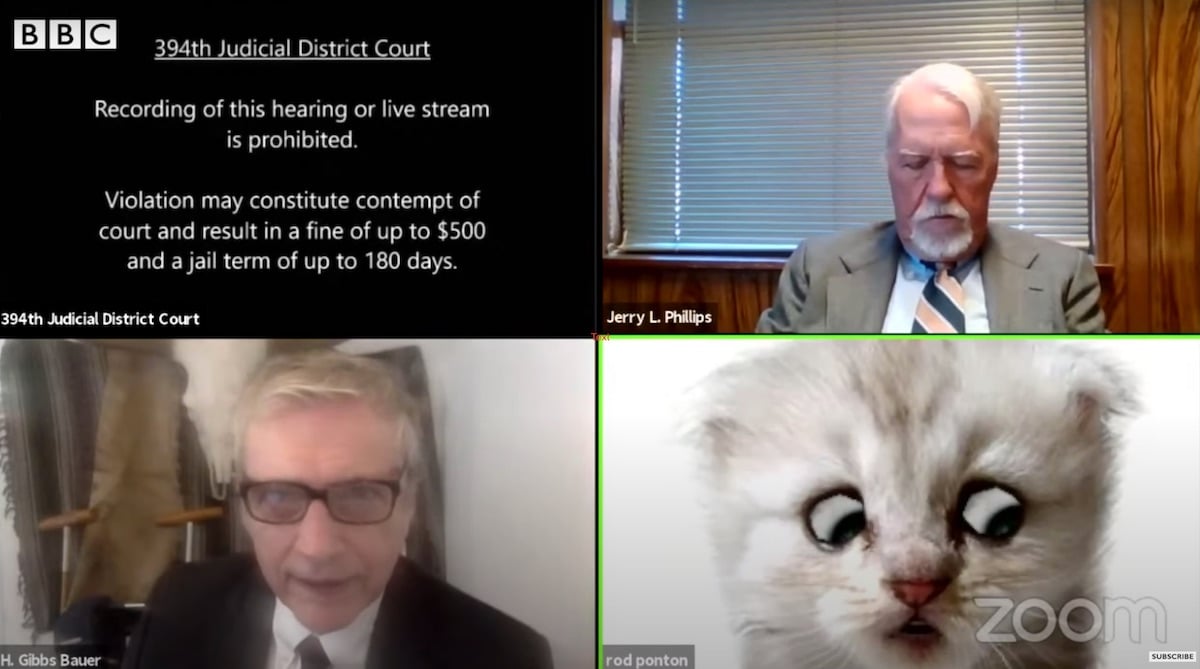 Ponton also remained professional, which renders the moment all the funnier. “I don’t know how to remove it,” he says of the filter. “I’ve got my assistant here and she’s trying to.” But he assures,  “I’m prepared to go forward with it.” And then those words for the history books: “I’m here live. I’m not a cat.” The way his eyes flick back and forth, conveyed through the kitten filter, kicks this whole thing up a notch.

A lawyer using Zoom had to let a judge know that he wasn’t a cat after inadvertently activating a face filter pic.twitter.com/vChc14mjM1

As no less than The New York Times observes of Zoom Lawyer Kitten:

The result was a video immediately hailed across the internet as an instant classic, in the rarefied company of videos like Knife Kid and BBC Dad. It offered an injection of harmless levity when many people are experiencing a rough time — and Mr. Ponton took it in good spirits.

“If I can make the country chuckle for a moment in these difficult times they’re going through, I’m happy to let them do that at my expense,” he said in a phone interview on Tuesday afternoon.

It’s lovely to hear that Ponton is taking this all in stride. In terms of things that can occur on Zoom in a professional setting and go viral, this is an innocuous and delightful event, but it still must be strange to find oneself an inadvertent international sensation. Ponton isn’t very online and had no idea that the video had exploded worldwide until he started to receive many calls from reporters and requests for interviews. He says that he was using his assistant’s computer for the hearing and that she was “mortified” by what must have been her filter still being in place. But this oversight provided joy for millions.

Zoom Cat Filter Video is flawless. Makes it all worth it. The internet, everything. Just a guy at the absolute end of his rope saying “I- I’m not a cat.” It’s all worth it. I feel alive.

And as for that warning on the video that “recording of this hearing or live stream is prohibited” and could result in being held in contempt of court? Well, that isn’t bound to happen in this case. No less than the presiding Judge Ferguson was the one to tweet it out, recognizing a teaching moment and epic Internet occurrence for the ages.

IMPORTANT ZOOM TIP: If a child used your computer, before you join a virtual hearing check the Zoom Video Options to be sure filters are off. This kitten just made a formal announcement on a case in the 394th (sound on). #lawtwitter #OhNo @zoom_ushttps://t.co/I0zaj0wu6K

(via The BBC, image: screengrab)