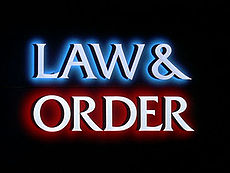 Well, this would just be a bummer: The very same day we extol the wonderful experience of channel-surfing through old Law & Order episodes back in the day, E! Online reports that Law & Order has been effectively canceled at the end of its 20th season, and will not be returning for a 21st.

This would tie it with Gunsmoke as the longest-running scripted primetime series — but just one more season would have given it the sole claim to the crown.

NBC has canceled Law & Order, E! News has confirmed. The cast and crew of the mothership procedural were informed of the show’s fate earlier today.

NBC has not yet responded a call seeking comment.

As Gossip Cop points out, the rumored cancellation hasn’t yet been confirmed, but it doesn’t sound good. If this is for real: They couldn’t give it just one more season, for record-making’s sake?