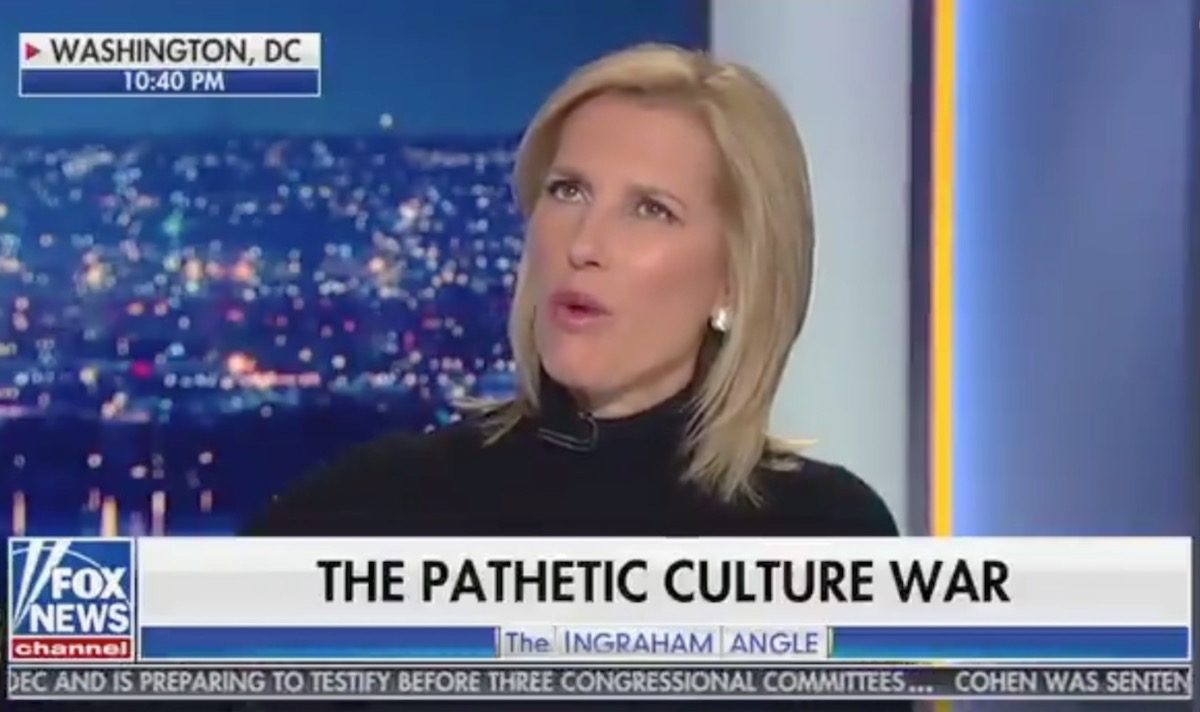 Earlier this week, an extremely racist and homophobic excerpt from a 1971 Playboy interview with John Wayne went viral. For some, this was the first they’d heard about what an incredible POS Wayne was. For others, it was an unnecessary reminder. Either way, we could all agree: John Wayne was terrible.

Jesus fuck, John Wayne was a straight up piece of shit

Except there had to be an outlier, didn’t there? There had to be someone stepping in to defend John Wayne’s comments. Plenty of right-wing figures were mocking “the left” for what they saw as cancelling a man long deceased (rather than seeing the original tweet as what it actually was, which was simply a case of “look at this weird thing I just saw”) but who was going to come right out and fully defend Wayne? Of course it was going to be Laura Ingraham.

Laura Ingraham *defends* John Wayne’s comment that “I believe in white supremacy until the blacks are educated to a point of responsibility.”

“The is what the Taliban does…rip down historical markers,” she says. “They don’t want any vestige of what was” pic.twitter.com/pA02fgaamr

In that clip, Raymond Arroyo brought up Wayne’s resurfaced interview in relation to another story in which a statue depicting the iconic kiss between a sailor and a nurse in Times Square on V-J Day was spraypainted with the hashtag #MeToo.

“Laura, what I don’t like about both of these stories is we’re judging the past in light of shifting moral, ethic, and cultural codes of today. We can’t do that,” he says. “You just can’t.”

First of all, yes you can. Because a big part of what it means for these codes to “shift” is simply that white people and especially white men–who in eras past got to be the definitive voice of those “codes”–now have to listen to the people that always had problems with these things, but they just didn’t have a voice in the conversation. Not that white folks don’t get an opinion, just that they no longer get to be the only opinion that counts. Racism and sexism aren’t more wrong now than they used to be; you just have to hear more from the people who have always been affected by those things.

Sure, that WWII photo became an iconic romantic image. But the reality behind it, as we’ve since learned, isn’t romantic. The woman in the photo is Greta Zimmer, who wasn’t even a nurse but a dental assistant. She was also an Austrian refugee whose parents, she found out later, had died in concentration camps. She was standing in Times Square when suddenly an incredibly drunk man she’d never met grabbed her and kissed her. You can still swoon at the image if it moves you. But to say that we can’t respect the reality of the scene now because no one listened to it–or even bothered to ask for it–in 1945 is ludicrous.

As for John Wayne, let’s not forget that this interview was done in 1971. So if we’re talking about “different eras” of socially acceptable behavior, that barely even qualifies. It’s not like we’re talking about the Civil War here, not that that stops Ingraham from drawing comparisons. “They’re either defacing statues or pulling them down,” she says, presumably referencing the continued efforts to remove Confederate statues from public spaces across the country.

I don’t even know how to start unpacking how little sense that makes, but Arroyo responded that “these are two iconic images of America. John Wayne and the sailor, the release, freedom. They’re impugning America.”

If criticizing a man for proudly declaring “I believe in white supremacy,” for calling Native Americans “selfish” for trying to keep their land, for declaring gay romance on screen to be “perverted”–if someone saying those things are unacceptable and have always been unacceptable is your idea of “impugning America”, then your version of America deserves to be impugned.

John Wayne may be an icon of a certain American ethos. But calling out the actor is not the same as calling out the country, except to say that racism, sexism, and homophobia won’t be silently tolerated in this country anymore, nor in its icons moving forward. A lot of people can represent what it means to be American. From here on out we’re just asking that those people not be racist AF.