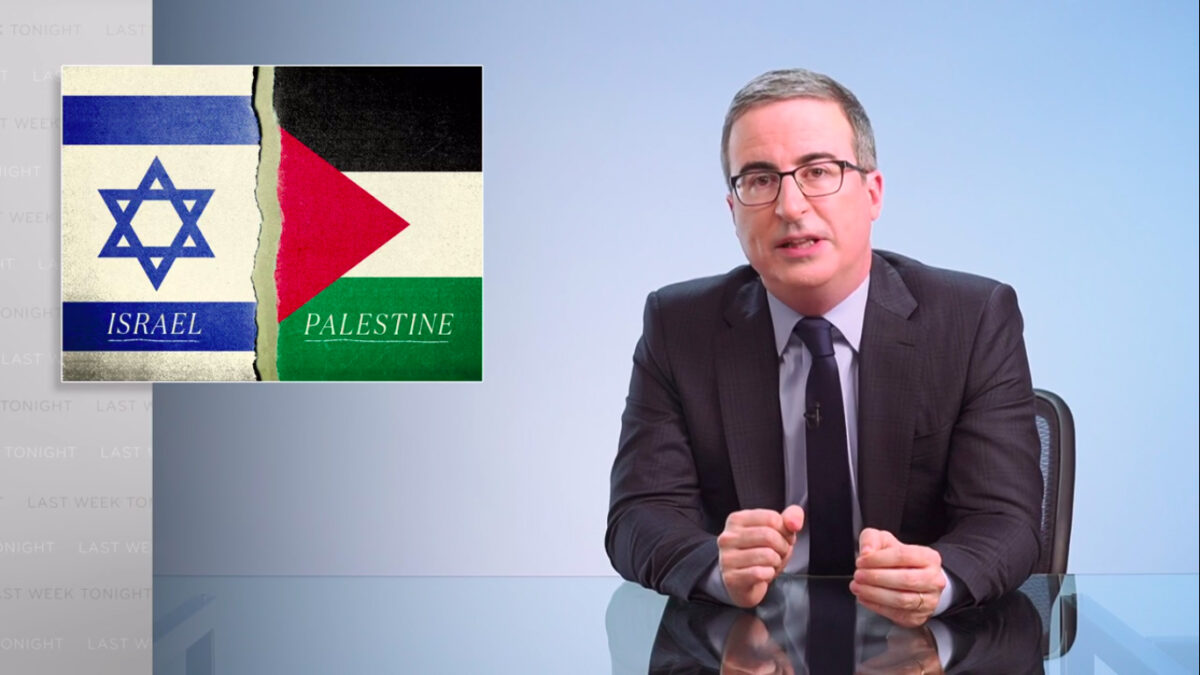 On Last Week Tonight, host John Oliver spoke frankly about what is happening with Israel and Palestine. (I will not call it a “conflict,” because it is clearly far beyond a “conflict.”) While many are afraid to speak out or use accurate language for what’s going on, it’s a relief to see Oliver, visibly angry and frustrated, discussing exactly what is occurring in Gaza and calling these strikes war crimes.

Here is the clip in question, where John Oliver calls out Israeli war crimes:

In the clip, Oliver states:

“The point is: This isn’t tit for tat. There is a massive imbalance when it comes to the two sides’ weaponry and capabilities. While most of the rockets aimed towards Israeli citizens this week were intercepted, Israel’s airstrikes were not. They hit their targets. Including a house in a refugee camp, a building housing the Associated Press and Al Jazeera, and this thirteen-story office and apartment building. And while Israel insisted that there were military targets in that building, and they destroyed it as humanely as possible, even warning people to evacuate beforehand. For the record, destroying a civilian residence sure seems like a war crime. Regardless if you send a courtesy “Heads Up” text. And when dozens of people have seen their homes or livelihoods destroyed, it doesn’t really help that the Israeli military posted this triumphant meme showing the explosion and the rubble.”

Oliver goes on to mock the military meme and how it could have been better done, in his bitingly sarcastic way. But the point stands. John Oliver called out the war crimes being committed by Israel and named them for what they are.

Twitter users reacted by sharing the video and their own reactions. Some discussed how Palestine activists are facing consequences for doing what Oliver did on his show. The importance of Oliver taking this stance, and the language that he used, was also lauded.

Will John Oliver face the same false accusations that Palestine activists do for point out the same facts? 🤔 https://t.co/8P97gbq16z

“For decades, America’s policy in the ME has been: America is an “unwavering friend to Israel,” which is a great thing to try & be, but… I would hope that a REAL FRIEND would tell me when I’m being an asshole & DEFINITELY when I’m committing a fucking war crime.” — John Oliver https://t.co/jy4s3LOObv

John Oliver said it out loud. I highly suggest that everyone watch the full episode of Last Week Tonight because John Oliver is, as usual, very on point.