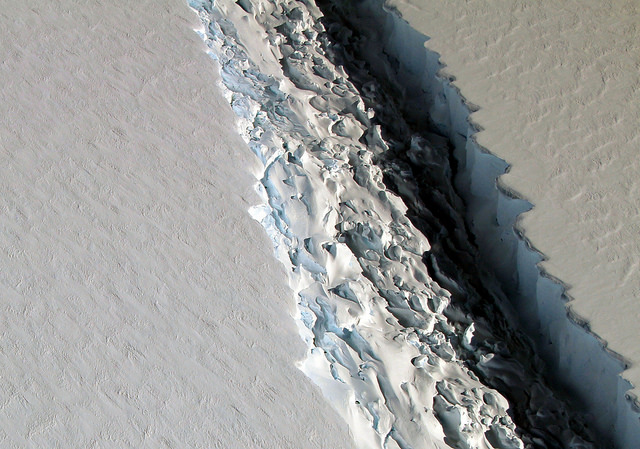 A massive chunk of ice just broke off of one of the largest ice shelves in Antarctica. The chunk is roughly the size of Delaware (or twice the size of Luxembourg), and weighs about a trillion tons. Its detachment follows a months-long observation of a 120 mile-long crack in the Larsen C ice shelf. It wasn’t exactly a surprise, then, to the scientists who had been observing it for quite some time now, and I guess it isn’t too much of a surprise to the rest of us who have been slowly watching this world go to hell in a hand basket. But excuse me, I digress.

Scientists seem torn over whether it was human-caused climate change that triggered the major crack. Some reason that ice shelves and icebergs in the Antarctic have been cracking and shattering for millions of years. But most every scientist can agree that this major change can serve as a warning for what might happen if we continue on our global warming course undeterred. Adrian Luckman of Project Midas, a British team who had been observing the crack since 2014, said, “The remaining shelf will be at its smallest ever known size. This is a big change. Maps will need to be redrawn.”

While the sea levels won’t rise because of this (the chunk had been floating in the sea for a while already), scientists are mostly worried about potential other damage to the ice shelf. After all, as the name implies, the ice shelf holds back massive quantities of ice from rolling into the ocean. If the Larsen C should shatter further, that would result in all of those bits of ice sinking into the sea, thus triggering a major rise in sea level. And if you, like me, live on or near the coast, then you’ve likely spent an inordinate amount of time reviewing sea rise tables and those neat (but terrifying) interactive maps showing what might happen with major sea change. (The ones I’ve linked here are for California because, hey, that’s where I live, but there are tons more if you live elsewhere.)

Anyway. I’m sure you’ll get a lot of people trying to talk to you mostly about how scientists are pretty torn over whether climate change triggered this or not. But the bottom line is that what happened here certainly isn’t helping things, and it serves as a pretty scary look at where we’re headed if we don’t do something about climate change and our current situation.