Lady Gaga has reached a Twitter milestone: The first user to obtain ten million followers. The milestone was reached near midnight on May 15, when she thanked her fans by saying “we did it!” The milestone says as much about Twitter as it does about Lady Gaga, considering only two years ago, Twitter had its first user to reach one million followers, Ashton Kutcher. The jump from the one million mark to the ten million mark in only two years certainly shows the impact and reach and Twitter. 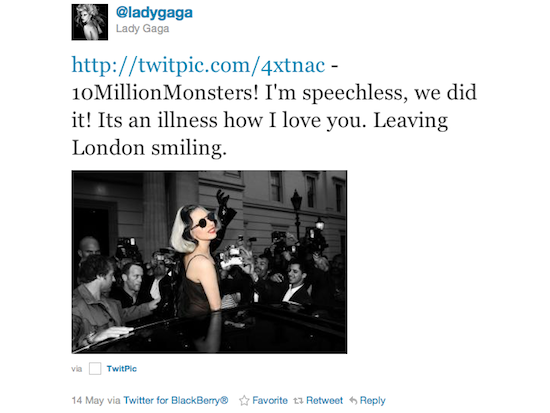 Comparatively, Lady Gaga has over 34 million Facebook fans, but considering Facebook is currently a much larger network, one could say the amount of her Twitter followers are on par with her Facebook fans. Mediabistro points out that Lady Gaga’s Twitter throne isn’t entirely secure, though, as — who else — Justin Bieber is quickly catching up, and may dethrone Gaga sometime later this year: