Rumor: Lady Gaga on Dr. Who? 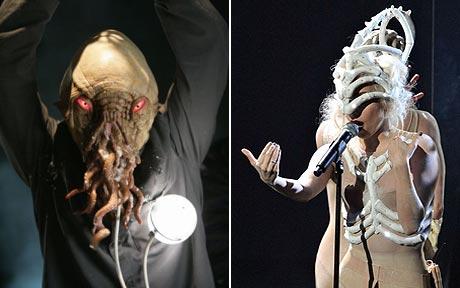 This is highly speculative, but it’s just to weird not to mention.

Lady Gaga might be in an episode of Dr. Who.  According to Gareth Roberts, scriptwriter for the show,

She is no stranger to dressing up and would be more than a match for the Doctor. It would be a great coup to get her.

As awesome a combination as Dr. Who and Lady Gaga would be (I mean… she’s practically a pop star from the future already), that quote could mean almost anything.  They could be in final negotiations to have her guest star, or this just might be a writer speculating in interview.

Gareth also revealed that he has already come up with a storyline for Gaga’s TV appearance.

Which could also mean pretty much anything.  He could have a script worked up, or he could have just had an idea he was bouncing around.

So, not a firm rumor at all, but fascinating.  Dr. Who and Lady Gaga?  Chocolate and peanut butter, or apples and oranges?