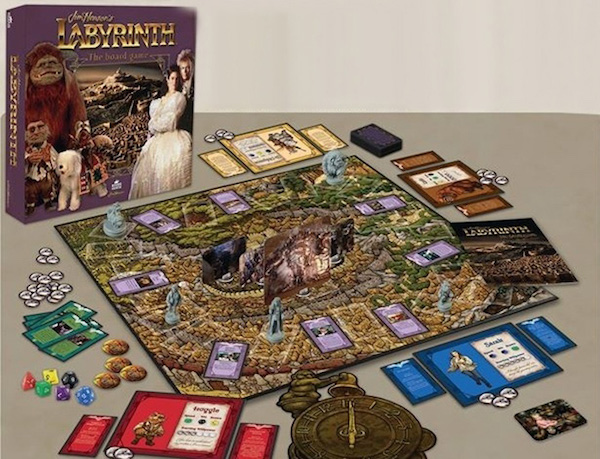 Perhaps surprising nobody, River Horse Games’ website went down more than a few times on Tuesday thanks to overwhelming demand for their Labyrinth board game, which went up for preorder. Say what you might about the movie’s dated aesthetic or whatever, but what’s clear is that the fanbase around Labyrinth are absolutely ravenous for merchandise based on the beloved movie. As well, the movie experienced a brief resurgence back into the limelight after musician/artist/all-around-best-weirdo David Bowie passed away earlier this year; you’ll remember Bowie played the film’s villain, Jareth. In addition to his role, Bowie recorded the album for the movie (you remind me of the babe…). But I digress.

We touched on the game for one of our TWS round-ups back in April, but now we’ve got a much more in-depth look at how the game plays. The Labyrinth board game appears to be a four to five player co-operative game where each player takes on the role of one of the characters in the movie, including Hoggle, Ludo, Sir Didymus, Sarah, or even Jareth. The player who takes Jareth plays against the other four, trying to stop them from winning the game. The neat thing about this game is that you don’t need four or five players to play. It’s completely playable by one player only, who takes on all four of the roles versus the game itself. But really, where’s the fun in that? Labyrinth is about finding friends and working together to save the day, isn’t it?

The game’s full of neat little touches that really give great direct nods to the source material. The “turn marker” that signifies whose turn is active is a picture of the babe (the babe with power, you know), and each of the “event cards” are events from the movie itself that translate well into the mechanics of the game. There’s a lot of dice rolling, as a nearly-full complement of role play dice are required to play the game, but that’s not necessarily a bad thing at all.

If you’re curious how the game plays, there’s a Let’s Play up from the Beasts of War YouTube channel.

If you want to pre-order the game, you can do so over here. It’s about $50.00, but really, can you put a price on nostalgia?