The LA Pride Parade Will Be a Resist Protest This Year 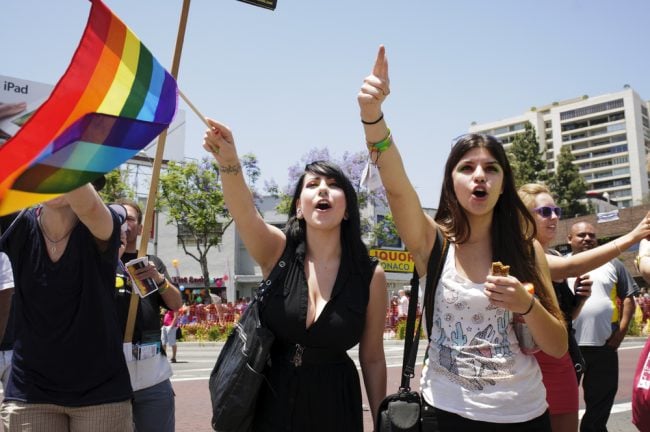 Pride parades have always been rooted in protest, but the Los Angeles (LA) Pride Parade is making it official this year. Coordinating as the LGBTQIA and POC Equality RESIST March, and in solidarity with the National Pride March scheduled for June 11, LA Pride will trade its annual parade for a protest march through Los Angeles and West Hollywood.

On the surface, this doesn’t necessarily change much. In many ways, a Pride parade is inherently an act of protest: an adamant refusal to be silenced and forced out of public spaces. Conservatives want to push LGBTQ citizens into the shadows, restricting their rights so that they can never live their lives in the open. In that sense, any loud, joyful parade is always going to be a protest. However, it’s also true that, as LGBTQ acceptance has spread, the Pride parades in major, liberal cities have lost their radical roots and become more like citywide parties.

There’s definitely nothing wrong with a great party. But LA Pride in particular received pushback last year for its attached music festival, which was disparaged as “gay Coachella.” Protesters decried the increased prices and lack of lesbian and transgender events, and they posted their displeasure under the hashtag #NotOurPride. Peter Cruz, associate director of the Asian Pacific AIDS Intervention Team, called it “a blatant commercialization of Pride and a disregard of Los Angeles’ LGBT community’s history and legacy.”

In response, Christopher Street West, the nonprofit association which puts on LA Pride every year, introduced new community-based initiatives to “continue LA Pride’s long-standing history as a voice of and for the entire LGBTQ+ community.” In their statement, they said, “Given the current political climate where divisiveness and discrimination continue to be part of mainstream dialogue, CSW is determined to make the LA Pride brand a unifying force for the LGBTQ+ community and its allies across all of Los Angeles.” Their initiatives included a community advisory board, increased transparency on the LA Pride website, and monthly volunteer events.

The move to a protest march could be seen as a continuation of that ongoing initiative, and it’s an important change given the recent attacks on transgender rights and the rise of so-called “religious freedom” bills. The change is also partly motivated by this year’s logistical issues. Due to construction on West Hollywood Park, LA Pride does not have as much space for its parade and festival as in past years. Chris Classen, the board president for Christopher Street West, reported that they stand to lose 70% of their “footprint” for this year’s parade.

There have been suggestions that the parade could move downtown for more space, but LA Pride is historically held close to LA’s gay district–something they feel makes them unique and helps LBGTQ-owned businesses. A recent report estimated that the parade brought in $9 million in revenue for West Hollywood businesses.

As LA Pride sorts out its final logistics, one thing is certain: under a hostile administration, Pride parades all over the country are going to feel more radical and more essential than ever.

(via Jezebel, The Advocate, and WEHOville; image via Shutterstock)