Kristen Stewart: Not Being A Feminist Is “Really Ridiculous” 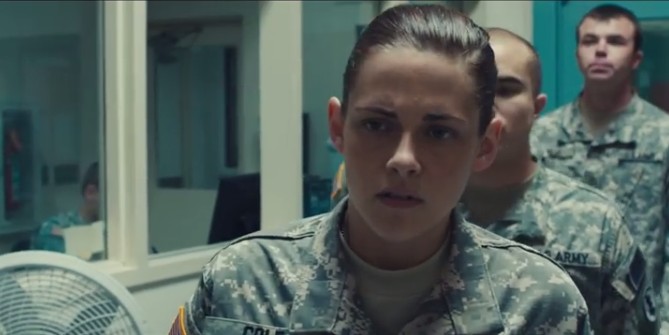 Kristen Stewart might seem indistinguishable from the character that made her an A-list star, but the actress definitely isn’t waiting around for a prince-in-sparkling-armor to fight her battles—in an interview with The Daily Beast to discuss her starring role in the upcoming Camp X-Ray (in which Stewart portrays an American guard at Guantanamo Bay whose convictions are rocked when she forms an unexpected friendship with a detainee), Stewart called Hollywood out for its unforgiving double standard and obsession with masculinity.

While discussing her recent work in indie films, the actress talked about the challenges women face in the American entertainment industry:

[…] in France, due to the history of French directors having romantic relationships with their lead actresses, they tend to tell more female-centric stories. In America, there are way more male filmmakers than female ones, and they want to tell more masculine stories. Most of our great films that we’re proud of, you’ve got Bob De Niro, Jack Nicholson, and the bravado is overwhelming. And that’s still going on. I read a million scripts and people say I choose my scripts carefully, but it’s just so obvious when the role is different, and complex, and not some typical, archetypal girl, because they’re so rare. Not to sound cliché, but it’s a male-dominated and driven business.

[…] You [women] need to make something that’s undeniably good. If a woman makes a bad movie, or does something stupid, then the door just slams shut. It’s fucked up.

Later on in the interview, Stewart was asked about the recent trend of young actresses “coming out against being labeled a feminist” and whether or not the stigma surrounding that label might be due to generational disagreement over its definition:

I know what you mean. That’s such a strange thing to say, isn’t it? Like, what do you mean? Do you not believe in equality for men and women? I think it’s a response to overly-aggressive types. There are a lot of women who feel persecuted and go on about it, and I sometimes am like, “Honestly, just relax, because now you’re going in the other direction.” Sometimes, the loudest voice in the room isn’t necessarily the one you should listen to. By our nature alone, think about what you’re saying and say it—but don’t scream in people’s faces, because then you’re discrediting us.

Relating it to my one little avenue, people say, “If you want to make it in the film industry as a woman, you have to be a bitch.” No, you are going to ruin any chance you have and give us a bad name. It’s the overcompensation to where our generation goes, “Relax,” because it’s been easier for us, and because we don’t have as much of the anger, so it’s like we can’t get behind it and it’s a bit embarrassing. But that being said, it’s a really ridiculous thing to say you’re not a feminist.

While I definitely don’t agree with the entirety of Stewart’s statement (for instance, if men allow one “bitchy” woman to color their perception of all women in the entertainment industry, said men probably deserved to be bitched out), it’s lovely to hear a woman with considerable influence–particularly a woman who is so often unfairly written off—speak out in support of feminism.