Seemingly based on one of the all-time trite phrases. 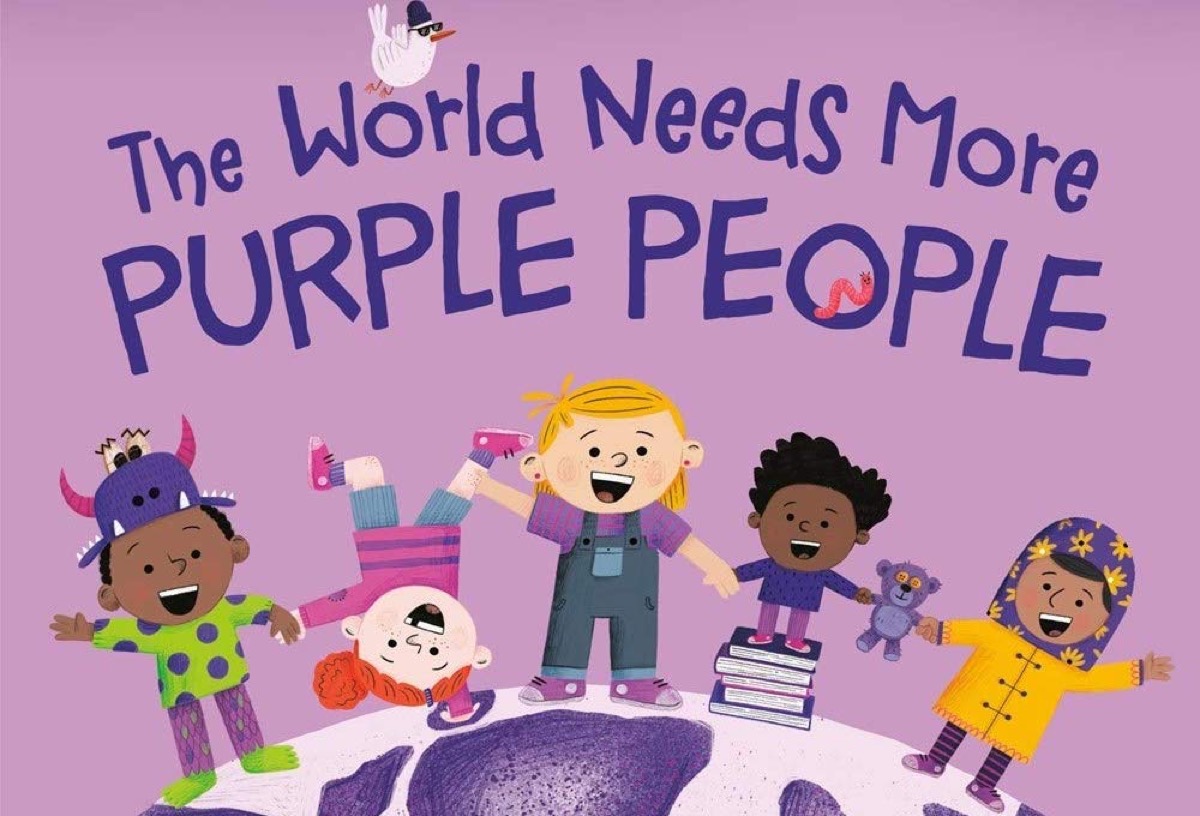 You probably know Kristen Bell. Beloved for her roles in The Good Place, Frozen, and dozens of other shows and movies, she can now apparently add “#1 New York Times bestselling children’s author” to her resumé. Her debut kids’ offering, co-written with Benjamin Hart, is called The World Needs More Purple People.

To be fair, this book is well-intentioned and, in a grim way, timely. But while the concepts ought to be kept accessible for children, it teaches a version of racism that is so overly simple that it is essentially incorrect—and harmful.

When marketing this book in a CBS interview, Bell talked animatedly about racial politics and George Floyd—and yet, the book never explicitly mentions racism or race. Instead, it’s a guide to being a “purple person” that occasionally doles out tedious platitudes like “forget what we thought made us different.” It dances around the point. None of this conceals that the concept is an unashamed, 16-page adaptation of that ancient white proverb: “I don’t care if you’re black, white, or purple.”

That sentence doesn’t appear word-for-word in the book, but it teaches the same idea. If you claim not to care if someone is purple, what you mean is that you’re “colorblind,” that you don’t see race, and that you don’t think it’s important—and, worse, that you believe that’s for the best. The book parrots this common idea. It even ends by looking at its five rules of being a purple person and discovering, “Well, I’ll be a llama’s mama! You’ve been beautifully PURPLE this WHOLE time!” This, of course, means that any reader would be purple, so everyone is purple, everyone is the same, and we should be “colorblind.” You get it.

If you’re reading this article and you’re BIPOC, your eyes probably glaze over when you read “I don’t care if you’re purple,” and you may have gone into a comatose state 200 words ago. The intention of the white person delivering this adage is to assure the listener that they’re not racist; the result is quite the opposite for BIPOC and others who know the problems with that all too well.

What’s the problem with people claiming they “don’t see race”? For one thing, many white folks have subscribed to this philosophy since the Civil Rights era, and yet, racism remains spectacularly unvanquished, because not paying attention to race means you’re doing nothing to fight inequality based on it. This is hardly going to change just because the voice of Anna from Frozen gave it a swing.

It goes further than that. Robin diAngelo writes in White Fragility (a deservedly popular book as of late) that “colorblindness” doesn’t attack racism; it defends racism. For example, by the logic of “not seeing race,” anyone who says that race matters is the one who is racist. In other words, it is racist to acknowledge race, which does nothing but leave a racist status quo unquestioned.

This is peculiar because Bell clearly doesn’t believe or practice this “colorblindness” in her personal life. She spends the entire above CBS interview acknowledging race, talking about the ways in which Black people’s lives are different to white people, and saying that white people need to hold one another to account. All of this is a good deal more helpful than if she had stayed true to her book’s message and pretended that she didn’t see race.

So, why is the message of ignoring race one she’s passing on to children? I’m not interested in playing telepath; it shall remain a mystery for the ages. Taking the book on its own terms, the intended takeaway seems to be that race shouldn’t matter—but all too often, kids look at this sort of thing and, through no fault of their own, think that race doesn’t matter.

To borrow another example from diAngelo: a white child sees a Black man in the supermarket and shouts in surprise, “Mummy, that man is black!” The typical response from the mother would be to shush the child, scold them for being rude, and maybe apologize to the Black man. Apart from the fact that this treats “black” as an insult, the problem here is that it doesn’t discourage the kid from being racist. It teaches them that it is taboo to discuss or think about race. This makes it more difficult to recognize racism and resist the stereotypes taught to us by society.

Make no mistake: White kids start learning those stereotypes from an early age. Racial messaging is all over the place, from cartoons to schoolbooks to cereal boxes. “Colorblindness” makes it difficult for us to talk about these beliefs. By making it taboo to talk about race, racism is held in place.

What might a better version of The World Needs More Purple People look like? I’m not going to try to write a whole picture book at the end of this article, but I would gently suggest that the book could explain in simple terms what racism is, why it’s wrong, and give a few examples of things kids could do to be anti-racist.

This new book could teach them the very opposite of the original Purple People: that talking about race is not racist, that it’s okay—important, even. As Michael and Bartoli write for NAIS, children should be taught that race is an essential part of one’s identity. Rather than gesture in the direction of race without ever discussing it, the book could be clear about what exactly race is, that it is essentially made up but cannot be ignored. The book could explain that racism is about how the world works rather than individual Big Racist Meanies. It could get kids to understand stereotypes and why they’re wrong.

Obviously, 16 pages of kid-friendly picture book can only do so much, but it’s important to properly teach white kids to be anti-racist, not just give them platitudes about being purple or whatever. They’ll benefit for it once they’re out in the world.

Think about your English class, that long-ago time when some poor sod tried to teach rowdy teenagers how to understand media critically. You didn’t take that class because parsing a metaphor in Catcher in the Rye is an essential life skill on its own. You took it because reading comprehension is genuinely useful when you go about your daily life.

This is especially important when it comes to filtering the racist messages that we receive from media about “dodgy” neighborhoods or thugs at protests or the demographic breakdown of the Avengers. If you want to see what happens when people don’t have that reading comprehension, check out Web 2.0 sometime.

I don’t want to be too mean to Kristen Bell. She’s contributed to valuable and interesting art. If you want to understand the argument for prison abolition, there are worse starting points than The Good Place. I also don’t want to be too ruthlessly critical of a book for tiny children, either, but the task of teaching white kids not to be racist is enormously serious and important. If she and Hart want to use their influence for good (as they should), then they ought to educate themselves better first. It’s not acceptable to drop the ball in this way.