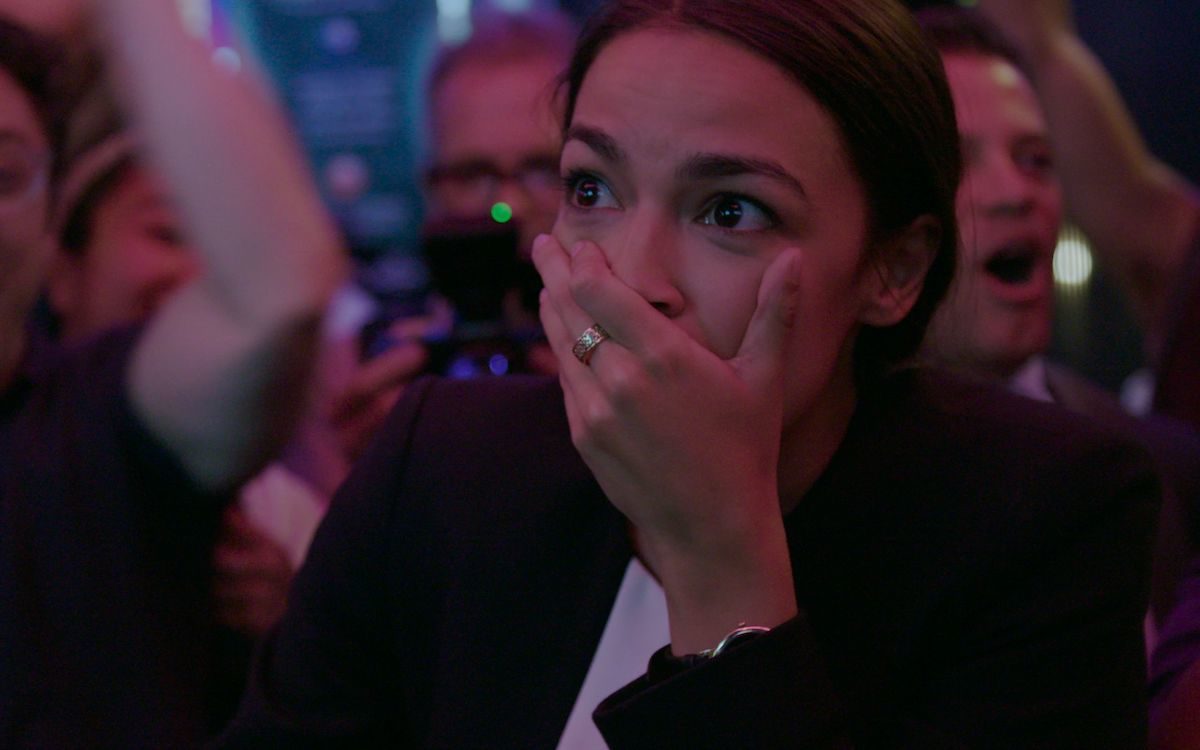 Knock Down the House is casually being referred to by many as “the Alexandria Ocasio-Cortez documentary” and while that’s not surprising, given AOC’s mega political stardom, the film is also more than that.

(Spoilers ahead, as much as you can have spoilers for a documentary about recent events. This article does discuss the outcomes of the 2018 primary races covered in the documentary.)

In the documentary, Ocasio-Cortez is one of four women running in a Democratic primary, all vying to unseat a male Democratic incumbent who was failing his constituents in some way. The fight, then, is not the expected one between left vs. right but, as Ocasio-Cortez says at one point, (I may be paraphrasing) up vs. down. All four of these women are political outsiders, not career politicians, taking on an incredible challenge because they believe they have the power to make a difference in their communities and beyond.

In addition to AOC’s sudden celebrity, there’s another obvious reason why the film and coverage of it focus so heavily on her. The film’s creators—director Rachel Lears and her husband/editor/co-writer Robin Blotnick—picked the candidates they would follow not knowing how their races would end. Of the four candidates, Ocasio-Cortez was the only one to win her election.

That doesn’t make the other women’s stories any less compelling. These are passionate, fierce women fighting an uphill battle for things they believe in. Cori Bush saw her community in St. Louis devastated by police violence. Paula Jean Swearengin ran in deep West Virginia coal country and saw the dangers and corruption of that industry first hand. Amy Vilela in Nevada had to watch her 22-year-old daughter die from a brain clot after a hospital refused to do the tests she requested because her insurance didn’t cover them.

But the film focuses heavily on AOC, and if the storytelling is a bit uneven, the story itself more than makes for it. The film gives a fascinating perspective to the process by which Ocasio-Cortez was elected. A lot of people see her as a sort of political Rudy—an impossible underdog who singlehandedly overcame enormous odds to take down establishment politics all by herself.

In reality, Ocasio-Cortez did earn her win. The documentary highlights just how good she is at this job and just how hard she worked. She showed up prepared to every event and forged genuine connections with voters and communities. But she was far from alone.

She, like the other women in the documentary, were sponsored by the organizations Brand New Congress and Justice Democrats, groups that seek out potential candidates they believe can mount impactful grassroots campaigns and then provide them with necessary resources. The organizations’ involvement doesn’t lessen the impressiveness of AOC’s trajectory.

Personally, I found it inspiring to know that even someone who seems to be the face of Doing It Yourself needed and had a whole team of people working for her. I know a lot of people, especially women and POC, who are inspired by people like the congresswoman but don’t think they could do something similar. It helps to know that even she needed a village behind her.

It’s hard not to wonder what the documentary would be if AOC had lost her race. It still would have been about four women who cared deeply about their communities and fought hard to make real change. And I’m so glad the film didn’t just end up being about the one woman who won her race. Blotnick (the film’s editor) told the New York Times, “If we were only to show what happened in her race, we could risk falling into fairy-tale territory.”

The degree to which all four of the candidates do care, and to see even one of them elected, does still feel like a fairy tale. Multiple times in this movie, we see politicians cry. Rather than project weakness, it’s an emotional sight for an audience who may have grown up and even lived far into adulthood, resigned to the idea that politicians don’t cry, not out of some sort of strength, but because the issues they legislate aren’t personal in a way that could ever move them to tears.

For these women, like the rest of us, politics is deeply personal. At one point in the movie, AOC sits in front of the Capitol building after her election and cries, recalling a memory with her father. It’s beautiful and it’s intimate, and beyond any doubt at all, it makes it clear that Ocasio-Cortez really does care about her constituents and the country itself as much as she appears too. And that means it’s possible for more people who care like that be elected to public office. It’s possible that this is the future.

In a fantastic piece at The Atlantic on “the quiet insurgency of tears” in the film, Megan Garber writes that “Knock Down the House offers a broad and bracing vision: Imagine a world shaped by leaders who care so much, it hurts.”

That, ultimately, is what the film is about. And it’s a vision that makes my heart fill with its own quiet insurgency.

Knock Down the House is streaming on Netflix now.