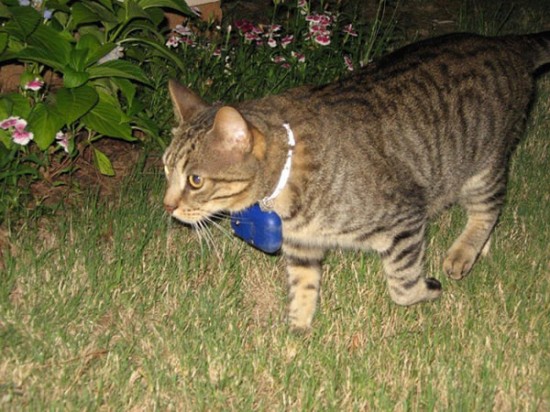 You know everything there is to know about Mr. Minxie-Bums, right? You know just the way he likes his belly rubbed, you know exactly when he wants his supper, and you know at what time he likes to go outside every night, but do you know what he does when he’s out where the streetlights replace the sun and the rules don’t mean a thing? A study conducted by students and researchers from the University of Georgia are catching a glimpse of the secret lives of outdoor cats with their Kitty Cams. The unobtrusive video cameras where attached to 60 urban free-roaming cats whose owners volunteered them for this project. Check out a short video below and learn about the atrocities your precious Mr. Minxie-Bums is committing in your very own neighborhood!

The American Bird Association states that the predatory nature of the domestic cat is one of the leading causes for the decline of many species of birds and small mammals in the United States. Out of the 74 million cats in America, it’s estimated that 30% kill prey. Kerrie Anne Loyd, a University of Georgia researcher who worked on the Kitty Cam project, was quoted as saying, “The previous estimates were probably too conservative because they didn’t include the animals that cats ate or left behind.” The Kitty Cam project was designed to get an accurate reading of how large the domestic cat’s effect really is.

Cat owners around the city of Athens, Georgia volunteered their cats to be fitted with Kitty Cams in order to collect data regarding the cats’ predation habits. The researchers secured a video camera around each cat’s collar, which allowed the cat’s activities to be recorded without affecting its ordinary behaviors. It was found that, on average, cats only brought home about 25% of what they killed, ate 30%, and left the remaining kills where they died. These findings may explain why so many species which make up cats’ typical prey are dying off so rapidly. The fact that cats kill without mercy or remorse was not the only thing learned by the project. Researchers were surprised to find that cats aren’t only dangerous to birds and small mammals.

The Kitty Cams revealed that 45% of the 60 cats studied darted across roads and 25% ate or drank things they found lying around. Although it’s no surprise that cats dart across roads (I’ve swerved to avoid hitting enough of them to know), I was surprised that a full quarter of the cats in the study ate things indiscriminately. Mr. Minxie-Bums might be going through his nine lives faster than you thought.

One thing that I wonder about, though, is what if the Kitty Cam was used in other cities? What would we find out about New York City cats? What kind of prey would cats in Juneau, Alaska stalk? Would San Franciscan cats dash in front of trolleys? The point of this study is to let people know that it’s important to keep their cats indoors in order to protect both declining species and the cats themselves.

Check out the video down below and visit the Kitty Cam official website to learn more about all the trouble your cat gets into when you open your front door.