New Kingsman: The Golden Circle Trailer Ropes All the Dopes With Some Fine Lasso Action 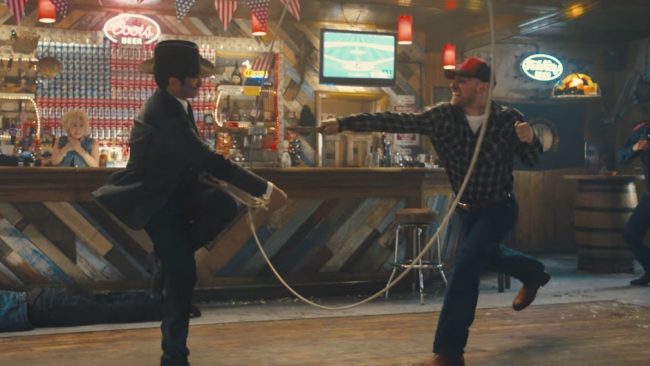 This latest Kingsman: The Golden Circle red band trailer spends a bit of time introducing us to the British spy agency’s American cousins. That means we get to take a good look at (wait for it) Agents Tequila (Channing Tatum), Whiskey (Pedro Pascal), Champagne (Jeff Bridges), and their Q/Merlin equivalent, Ginger (Halle Berry). So, you know. You’ve got the British agents sitting there with their names borrowed from the legend of King Arthur, and there are the Americans with their names taken from liquors and alcohol. Nice. What’s especially interesting is that the only American liquor codename (whiskey) went to Pedro Pascal, who was born in Chile.

Speaking of Agent Whiskey, this trailer spends a lot of time both poking fun at and showing off his weapon of choice, the lasso. It’s actually a sight to behold, as anyone who’s watched any trick lassoing can tell you. Sure, a few of the things here in the film might be computer-generated, but still, there’s a basis and all that. I definitely know I was surprised to see the lasso turn into what’s basically a gosh darn lightsaber and cut a guy in half. I wouldn’t make fun of anything at that point, nope.

What I also really enjoy is seriously how tropey they’ve made the American spy agency. Like, they’re sitting there in the equivalent of a Texas Roadhouse or one of those barbecue places with sawdust on the floor and they’re talking about saving the world with their Savoy-suited allied spy organization. The first Kingsman was already pretty tropey (and gloriously so, don’t get me wrong), but I have a feeling that this one is seriously aiming to top that and then some.

Oh! And of course, we get a great introduction to Julianne Moore, who plays the film’s big bad, Poppy. (Five bucks says there’s a joke in the movie about confusing Poppy’s gender via dialogue: “I thought you said Pappy!”) I mean, we don’t get too good of a look at her evil plan or anything aside from a bunch of drones carrying packages full of … something liquid, but we do know she’s totally the one who utterly tears down the Kingsman organization with the tap of a finger. It’s nice to see a capable female full-on supervillain in a spy movie is all I’m saying. It’s refreshing.

Anyway. If you’re stoked to check out The Golden Circle, you’ve only got a little bit longer of a wait ahead of you. It hits theaters on September 22nd.