The New Killing Joke Movie Failed Batgirl in So Many Ways 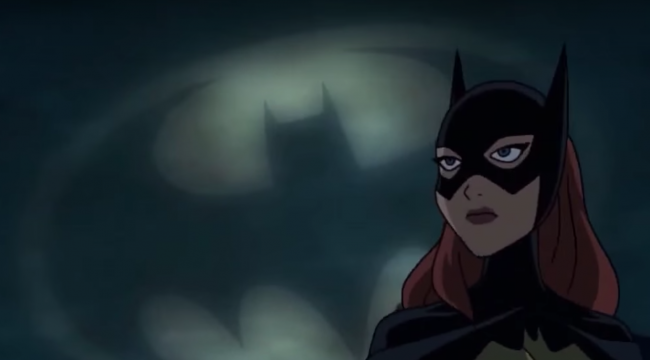 In the simplest terms, The Killing Joke was not good. There were some very questionable characterization choices regarding many of the side characters, the villains, and even with the Joker himself. The most egregious error of all, however, is in how the movie treated Barbara Gordon, aka Batgirl. It reduced her to nothing more than motivation for Batman, and removed whatever power she had going into the movie. She’s presented as if she were a teenager, a lovelorn girl who can only think about Batman. It’s in this presentation that the creators failed her.

Fans of Batman and Batgirl are no doubt already familiar with the main storyline of The Killing Joke, and if you aren’t, Marcy Cook’s review of this movie from yesterday excellently breaks it down. But for this particular animated feature, they tacked on (in nearly every sense of that phrase) a prologue that ostensibly centered on Batgirl and her run-in with a particularly misogynistic wannabe crime lord named (I kid you not) “Paris Franz.”

Amongst the laundry list of horridly sexist tropes hurled at Batgirl, she finds herself the object of this man’s obsession, and is stalked by him to the point that Batman interferes, taking her off the case. In one scene, Franz does his best imitation of a Tinder match, calling Batgirl “my special girl,” patronizing her and infantilizing her in the most squicky way possible. In response, Batgirl calls this attention “cute” and “a little flattering.” The argument could be made that she’s perhaps being facetious with the former, but the latter is more than a little bit ambiguous. But what seals the deal and throws this interaction far, far into the deep end of bad is how Batman literally mansplains (batsplains?) how Franz has objectified her. It’s as if Batman has become a mouthpiece through which the writers wish to explain how much they know about sexism and misogyny. It doesn’t work.

It should be noted that throughout this entire prologue, Batgirl’s being presented as this lovesick woman pining after Batman’s affections. In side scenes with her “day job” at the library, she speaks with a friend about how she’s after “a yoga instructor” who won’t really give her the time of day (read: Batman). When she’s not busy being patronized and objectified by a gross villain, she’s instead only all about Batman, Batman, Batman. It’s as if her life completely centers not around her partnership with him or the crime fighting, but rather her romantic interest in him.

After a particularly heated exchange between the two of them, they end up having sex. In a scene right out of a cheesy rom-com, they argue and after a small scuffle, Batgirl kisses Batman, who reciprocates. Batgirl removes her mask and the upper half of her suit (the only clothing removed in this scene), and the camera pans up to a really weird gargoyle.

idk how to feel about this pic.twitter.com/gsBGHsYet5

One supposes that this scene is supposed to empower Batgirl, that it’s supposed to present her as a woman who is, one guesses, sexually liberated and fully in charge of her wants and desires. Unfortunately, the scene comes off as nothing more than a scene that caters to the male gaze. Once again, it presents the idea that her life centers only on her infatuation with Batman. Rather than keeping her focused on staying in the case (which is what sparked the argument), she of course gives in to her passions and kisses Batman, because duh, she loves him and he’s, like, all she can think about. *hair twirl*

For those of you who know what happens in The Killing Joke, you likely already understand that this scene also serves as a way of getting Batman emotionally invested in Batgirl. This is supposed to add weight to why Batman would go after Joker after the Joker brutalizes Barbara in front of her father.

It’s also worth noting that that Batgirl’s role in The Killing Joke main storyline parallels that of the Joker’s wife, who is killed on the night he’s about to embark on a robbery. This is the “one bad day” theme that threads its way through The Killing Joke, and when the Joker shoots Barbara, it’s his attempt to break Batman down to his level, to give him one bad day that would send him over the edge.

In other words, it solidly puts Batgirl into the fridge. Her suffering isn’t her own, it’s there only for the benefit of Batman and his own motivations.

What’s mind boggling about how Batgirl is presented is the fact that, according to Bleeding Cool reporter Jeremy Konrad, the writers still felt like they had created a “strong female character.” As io9 reports, during a San Diego Comic-Con panel about the movie, Konrad voiced his dissent, earning the ire of co-screenwriter Brian Azzarello, who said, “Wanna say that again? Pussy?”

Sure, Konrad might have been heckling from the crowd, but that does not excuse Azzarello’s reaction. Keep in mind that Azzarello is a co-screenwriter, someone who helped bring this movie to life, and someone who felt that they had created a strong female character, who (in nearly the same breath) uses “pussy” as a derogatory term, an insult. That should tell you all you need to know about how Batgirl’s been handled in The Killing Joke, really.

What’s perhaps more aggravating is the fact that Timm explained their reasoning behind including the scene, and in the process, he infantilizes Batgirl. He said:

We were aware that it’s a little risky. There’s definitely some stuff in that first part of the movie that’s going to be controversial. Here’s where we came down on that specific issue: It was really important to us to show that both of the characters make some pretty big mistakes. I mean, his ‘parental skills’ aren’t that great. Maybe never having had any kids of his own, he doesn’t realize that if you tell a kid to not do something, they’re going to want to do it even more.

Batgirl isn’t a kid. Let me say that again: Batgirl isn’t a kid. Despite her -girl suffix, she’s presented in the movie as a grown woman, yet it seems like everyone around her treats her like she’s a child. Thus, it’s in that way that the writers and producers truly connect with Batman. He makes decisions for her, just as they do in writing her. They elect to put Batgirl through these things, inexplicably view it as progress and empowerment, then give themselves plenty of credit for it. How does that work?

As I said earlier, it made her nothing more than a fridged interest that would only motivate Batman. Not even the mid-credits scene showing her as Oracle is nearly enough to redeem any of this movie.

But what would have made it work? As Marcy pointed out in her review, female writers would have likely helped a ton. Getting more female voices into the mix might have helped them avoid this less-than-stellar handling. This movie stands as proof of what can go wrong when male writers think that they’re writing strong female characters, when in actuality, they’re creating the furthest thing from that.

Ultimately, this Batgirl prologue to The Killing Joke failed to do what Timm said it would do. It didn’t “tell a Batgirl story,” or let us “learn that she’s an interesting character.” What was supposed to be a prologue about Batgirl was, in the end, nothing more than a story about Batman and why he does what he does. In that way, the movie just plain does not work the way that the creators thought it would. The fact that they thought this would be even somewhat of a good thing for her character is, perhaps, the most disappointing thing of all.