Can’t Afford Expensive Trading Card Games? Design Your Own, Like These Folks Did 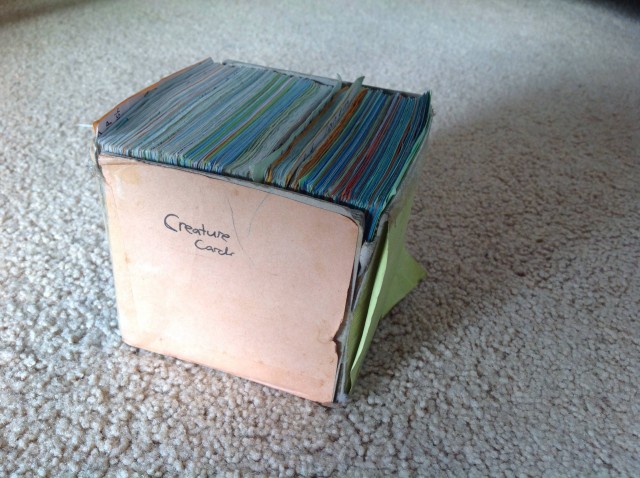 Many folks are fully aware that trading card games like Magic: The Gathering and the Pokémon Trading Card Game can often be ridiculously expensive–almost prohibitively so. Faced with a desire to play a game but unable to afford it, two kids (now adults) created their own trading card game. “Creature Cards,” developed by Reddit user one23abc and their brother, borrows a lot from the aforementioned games, and frankly, it’s pretty gosh darn neat.

Reddit user one23abc explained the rules in a comment reply to the /r/pics thread featuring their game. They write:

There are 3 types of card: creature, evolution and item. At the start of the game you start with 3 creatures, 1 evolution and 1 item. Play is divided into player turns. You can think of each turn as having five of phases; draw, item, summon, attack (or evolve), then end. Most items can only be played during the ‘item’ phase. However some items can be played on your opponents turn under certain conditions (think of them as ‘trap’ cards from yugioh)

If your creature has an evolution, you may chose to evolve instead of attack. A creature has to attack at least one time before it may evolve to the next stage (creatures typically come in 1 stagers, 2 stagers, or 3 stagers, with the latter being the least common but most powerful in a deck)

Evolutions! Items! Dice rolling! And look at that art!

When I was little, my brother and I loved card games like pokemon and yugi-oh, but we were too poor to buy them. So we made our own card game.

If they could come up with this when they were super young… I wonder what they’re up to now? Any game designers hiring anywhere? You listening, Wizards of the Coast?