I take my coffee black and DRM-free, please. 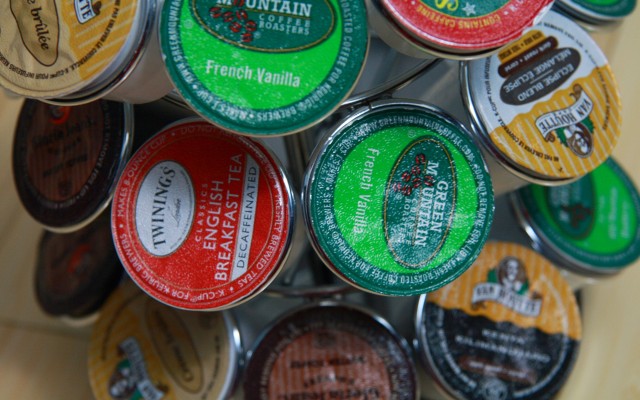 Green Mountain Coffee Roasters are not content to have a single-serving Keurig coffee machine in every home and office building; they want dibs on those little pods you use to make the coffee, too. So like the movie industry and music industry before them, they’ve decided to shut out the competition with the cunning use of DRM-locks.

Once upon a time, Green Mountain owned the exclusive rights to these pods (also known as K-cups), but their patent on the design expired back in 2012. Since then, other beverage and food companies such as Tassimo, Nestle, and Starbucks have jumped in to make their own versions of the pods available. You know, because it’s literally just a plastic cup with coffee in it. Not that hard to do, guys. There are even reusable versions

Well, all that might change if Green Mountain gets its way. According to a statement CEO Brian Kelley gave at the company’s fourth-quarter earnings call in November, the Keurig 2.0 will come equipped with sensors that keep third-party pods out:

To ensure the system delivers on the promise of excellent quality beverages produced simply and consistently every brew every time, we use interactive technology to help us perfectly brew all Keurig brew packs. Because of this the system will not brew unlicensed packs.

Naturally the competition is not happy about this, least of all TreeHouse Foods, who just slapped Keurig with a lawsuit for engaging in exclusionary agreements with suppliers and distributors. The filing reads:

Even in the face of these exclusionary agreements that have unreasonably restrained competition, some companies, such as TreeHouse, have fought hard to win market share away from Green Mountain on the merits by offering innovative, quality products at substantially lower prices. In response, Green Mountain has announced a new anticompetitive plan to maintain its monopoly by redesigning its brewers to lock out competitors’ products. Such lock-out technology cannot be justified based on any purported consumer benefit, and Green Mountain itself has admitted that the lock-out technology is not essential for the new brewers’ function. Like its exclusionary agreements, this lock-out technology is intended to serve anticompetitive and unlawful ends.

TreeHouse absolutely has a point: while music companies can make the (very lame) argument that DRM allows them to protect their products from pirates and file-sharers who would copy Mp3s without paying for them, there’s no reason for the DRM technology to exist other than to mess with competitors, and possibly aggravate a whole bunch of customers in the process. Considering that third-party unlicensed pods only account for 12% of the Keurig-coffee market, it’s all the more frustrating that they’re willing to go that far to shut other companies out. Maybe you guys should focus on making your coffee better rather than making it impossible to drink anything else with your machine, hmm?

(via TechDirt, image via Chun Yip So)