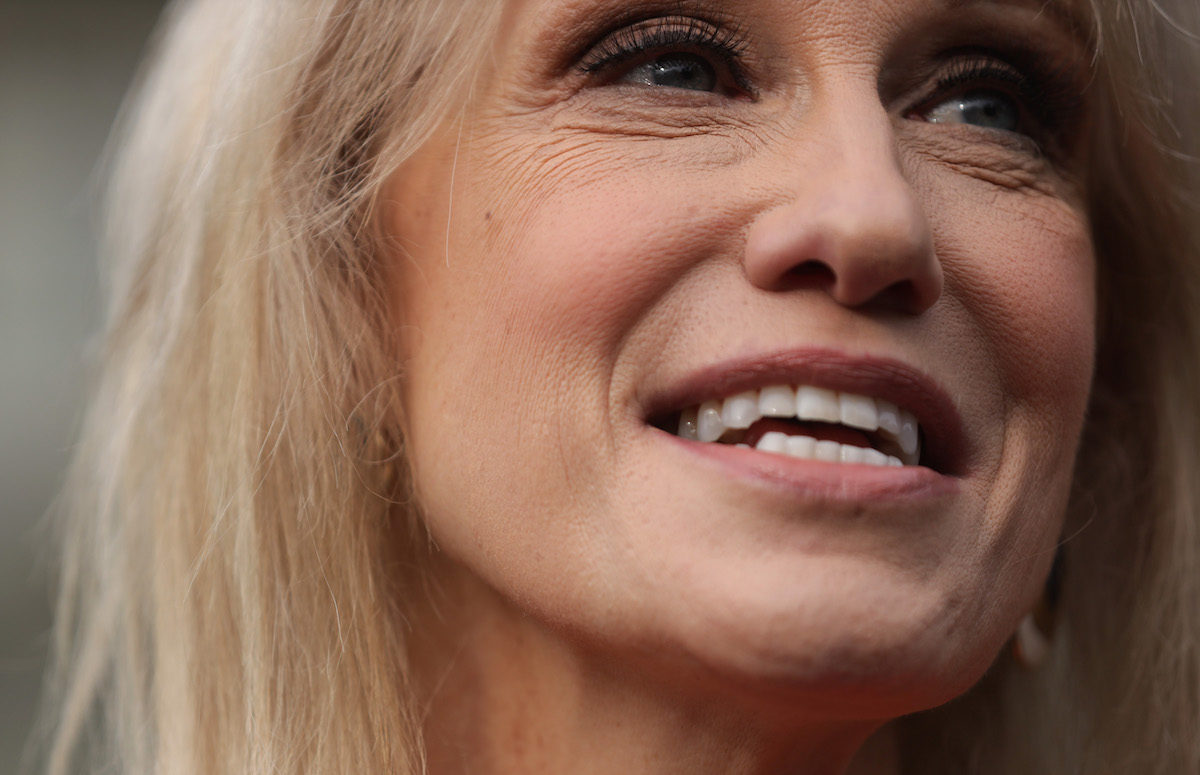 Earlier this week, it was rumored that Donald Trump was considering Kellyanne Conway or Treasury Secretary Steven Mnuchin to replace his current acting Chief of Staff Mick Mulvaney. Trump denied the idea but it was written up by a ton of outlets, including the rightwing Washington Examiner.

That outlet’s reporter, Caitlin Yilek, dedicated a few sentences in her article to Conway’s husband, George Conway, and his hatred of Trump. Mr. Conway frequently tweets negative things about Trump, with Trump occasionally attacking back, and Yilek noted that Kellyanne “has been in the middle” of some of those spats. A lot has been made over this strange dynamic, and Yilek is nowhere near the only person to bring it up in this context or any other. But for whatever reason–maybe because the conservative tabloid-turned-news-lite site is expected to be friendly towards Republicans or maybe because Yilek is a young woman and therefore possibly perceived as easily intimidated–Conway lashed out.

A lot of people don’t seem to understand that this (in form if not specifics) is a not-uncommon strategy with reporters, particularly newer or junior ones.

A furious allegation of unfairness might be enough to tone down a story, so why not feign fury?

Yilek released audio and a transcript of a call with Conway, who called to berate the reporter–and again, this is a reporter from the Washington Examiner so really, there are no heroes here. But my god, Conway sure is pushing to make herself the villain.

It seems like Conway might have thought the conversation was off the record, but Yilek says that was never stated or agreed to. Conway repeatedly attacks Yilek’s decision to include information or speculation about her marriage in an article about her political career. And while I definitely understand Conway’s position, Yilek maintains that it’s relevant, which seems fair in this case.

In the call, Conway mocks Yilek’s lack of “original reporting”  (her original article cited Bloomberg as a source), calling her “lazy” and saying her writing is “just for clicks.”

Conway also tries to position her attacks as some sort of feminist life lesson. “You’re really going places,” she says. “Let me tell you something, from a powerful woman. Don’t pull the crap where you’re trying to undercut another woman based on who she’s married to. He gets his power through me, if you haven’t noticed. Not the other way around.”

When Yilek suggests multiple times that Conway speak to her (male) editors, Conway mocks her and says she doesn’t need to. “You don’t have to rely upon the men in your life and pretend somehow by way of reporting that I rely on the men in my life, which clearly isn’t the case.”

From there, she spiraled into trying to rewrite Yilek’s (honestly incredibly perfunctory) article–or, really, the one brief paragraph where Yilek mentions George Conway’s attacks on Trump.

Do you think you could have written in there, first, only woman, first woman to run a successful presidential campaign. Do you think you could have described me as somebody who wears red a lot, or is a mother of four, who has been here from day one and has survived all these other people? Or maybe you have an obligation to tell people, well, as far as you know, I’m not a leaker, let alone the leaker, and [inaudible] we’ve never even had a conversation, including about my feelings. Any of these would qualify as reporting. Or, I could argue, breaking news.

Ah yes, the kind of journalistic integrity that makes sure to note a person’s favorite color while discussing their qualifications for the position of White House Chief of Staff. That’s what the Examiner has been missing.

Conway ended the call by telling Yilek, “if you’re going to cover my personal life, then we’re welcome to do the same around here.”

That sure sounds like a threat, especially coming from someone in an administration that has been known to attack journalists’ and political figures’ personal relationships and family members. (There’s a whole impeachment inquiry happening around that right now!)

Today, Conway told reporters that it was “silly” to call that a threat, though, adding, “If I threaten somebody, you’ll know it,” which also sounds like a threat.

During the call, Conway said she didn’t want to add any comment to Yilek’s original article because, in her words, “Nobody read your story.” Which was probably true until this call, so well done there, Kellyanne!