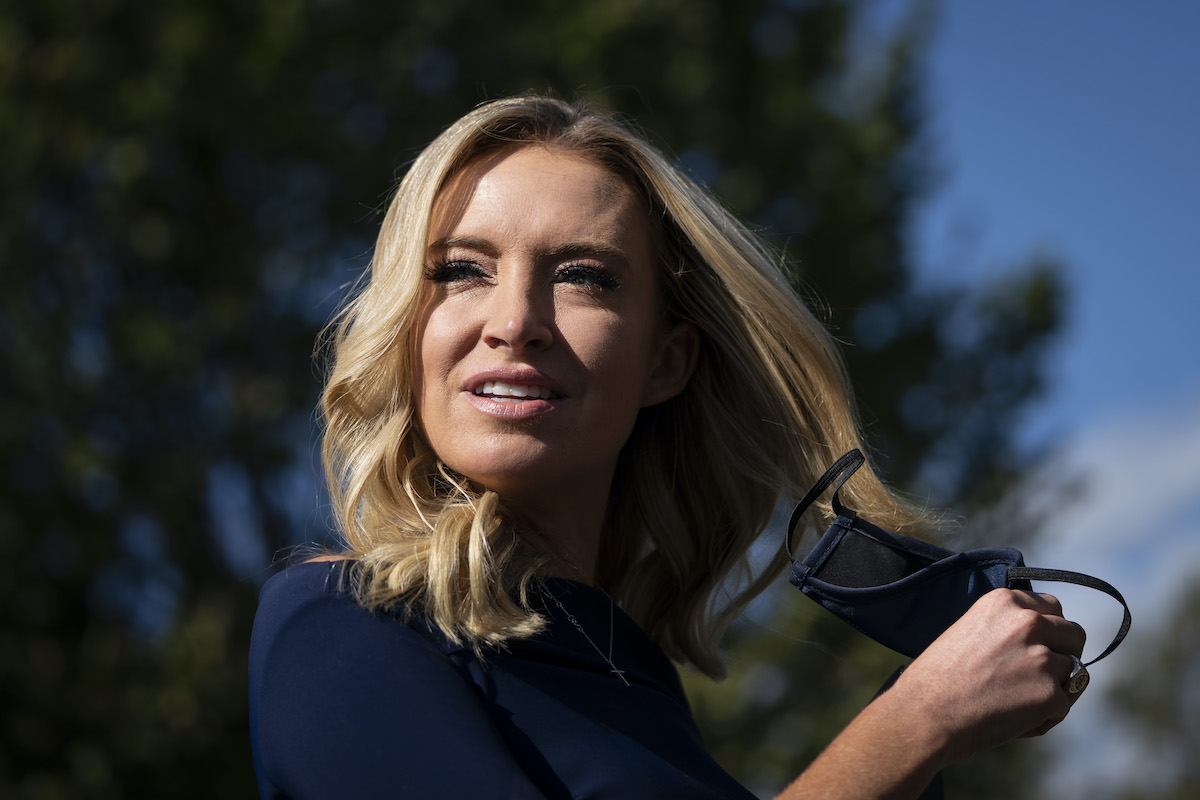 White House Press Secretary Kayleigh McEnany has become the dozenth or so member of Donald Trump’s close circle to test positive for COVID-19 after last weekend’s apparent superspreader Rose Garden event. That was the day that Republicans flouted Washington DC’s ban on gatherings of more than 50 people in order to celebrate Trump’s Supreme Court nominee Amy Coney Barrett and then mingled and hugged each other without masks on. And now the list of positive cases reportedly directly tied to that event continues to grow.

McEnany announced her diagnosis on Twitter, in a statement that echoes the same kind of indignance she typically greets reporters with at briefings.

“After testing negative consistently, including every day since Thursday, I tested positive for COVID-19 on Monday morning while experiencing no symptoms,” McEnany’s statement reads. “No reporters, producers, or members of the press are listed as close contacts by the White House Medical Unit. Moreover, I definitively had no knowledge of Hope Hicks’ diagnosis prior to holding a White House press briefing on Thursday.”

“As an essential worker, I have worked diligently to provide needed information to the American People at this time,” the statement continues. “With my recent positive test, I will begin the quarantine process and will continue working on behalf of the American People remotely.”

McEnany’s defensiveness is not surprising. She, like Trump and so many others, have repeatedly cited their frequent testing as a good enough reason not to wear a mask, when it’s very clear that that’s never been enough. No test is 100% accurate and the kind of rapid result antigen tests White House staff and guests would be getting is less reliable than other, slower methods of testing.

Yet the entire Trump team has relied heavily, if not solely, on testing to keep themselves uninfected, and they’ve continued to do so, even after positive tests started to sweep through the White House.

McEnany says she “definitely” didn’t know she’d been exposed to the virus when she held a press briefing Thursday. But she definitely did know about it by Sunday, when she was still briefing reporters without a mask, albeit outdoors.

McEnany said in her statement that she will begin quarantining now that she’s tested positive, but the CDC guidelines recommend a person quarantine for 14 days after coming into contact with someone who has COVID-19, which she definitely has.

The defensive tone of McEnany’s statement makes it clear that she knew how this news was going to be received, especially by the reporters she’s continuously put at risk. She wasn’t wrong.

Masked WH reporters often ask WH aides why they refuse to wear masks. We’re regularly told it’s bc they are tested often & have been negative.

Now @PressSec, who didn’t quarantine after being exposed to Hope Hicks & who addressed reporters w/o mask yesterday, is positive. https://t.co/GBgb1KzOMo

After Hope Hicks tested positive, Kayleigh McEnany was pulled off President Trump’s trip to New Jersey and later informed she’d had direct contact with Hicks. Yet McEnany did not quarantine and was at the White House Friday and yesterday, citing multiple negative tests.

Kayleigh McEnany has repeatedly spoken to reporters without a mask on. She has recklessly endangered lives. https://t.co/BKnrD1AWRn