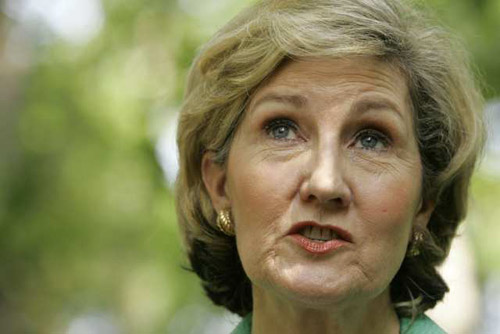 Kay Bailey Hutchison, Senator from Texas, has responded to the successful launch of the Falcon 9 rocket.

This first successful test flight of SpaceX‘s Falcon 9 rocket is a belated sign that efforts to develop modest commercial space cargo capabilities are showing some promising signs. While this test flight was important, the program to demonstrate commercial cargo and crew transport capabilities, which I support, was intended to enhance not replace NASA‘s own proven abilities to deliver critical cargo and humans to low Earth orbit. Make no mistake, even this modest success is more than a year behind schedule, and the project deadlines of other private space companies continue to slip as well. This test does not change the fact that commercial space programs are not ready to close the gap in human spaceflight if the space shuttle is retired this year with no proven replacement capability and the Constellation program is simultaneously cancelled as the President proposes.

Right, because NASA has never missed a deadline.

It’s worthwhile to remember to be wary of representatives from Texas and Florida decrying changes in NASA.  More money to NASA generally means more jobs that they can say they brought to their constituents, regardless of the scientific merit or efficiency of the program.  A shift in some of NASA’s duties to the private sector would mean a loss of government jobs in their districts.

This might be a good time to mention that Senator Hutchison considers earmarks to simply be a way to get “Texans’ fair share of their tax dollars,” and was named “Porker of the Month” by Citizens Against Government Waste in 2009 based on her legislative history.

I guess what I’m saying is take a grain of salt with your pork.