Katy Perry Outfit Gets Her Kicked Off of Sesame Street 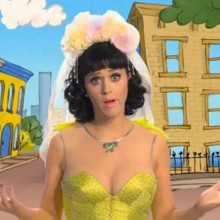 Katy Perry was supposed to star on the New Year’s Eve episode of Sesame Street, but apparently the cleavage-revealing dress she wore for the taping isn’t sitting right with parents.

It was after Sesame Street posted a segment of Perry’s episode to YouTube that the complaints started rolling in. TMZ reports:

The song made its way to YouTube Monday and racked up nearly a million views. But some parents started complaining her cleavage was too front and center. We’ve learned producers have decided not to air the song on the show.