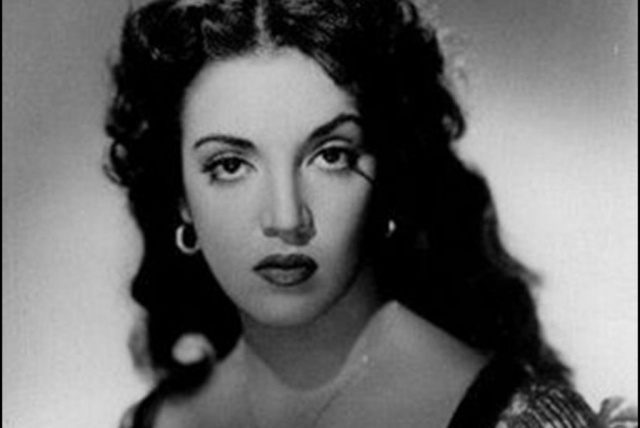 The beautiful illustration that is featured in today’s Google Doodle is the Mexican actress Katy Jurado. Born today in 1924 to wealthy parents in Guadalajara, Mexico, María Cristina Estela Marcela Jurado García, later known at Katy Jurado, spent her career playing “femme fatales” in early Mexican cinema in what is now seen as the Golden Age of Mexican cinema.

Her family did not support her intentions to become an actress, but at the age of sixteen, Jurado signed her first contract in secret and made one of the best films of the era La vida inútil de Pito Pérez (1943).

Jurado learned English by memorizing scripts and, despite the language barrier, delivering performances that, as Google puts it, “transcended the stereotyped, over-sexualized roles written for Mexican women at the time.” While she was never able to fully break all of the racist barriers that were set up against her, it didn’t stop her from working alongside some of the biggest stars of the time from Grace Kelly to Marlon Brando.

“I didn’t take all the films that were offered — just those with dignity,” she once said. And that dignity led her to become the first Latina actor to win a Golden Globe Award for Best Supporting Actress in the 1952 film High Noon. In addition, she also won three Silver Ariel Awards, the Mexican equivalent of the Oscar, and nominations for several Academy Awards.

Her film career spanned over seventy films and laid the foundation for Latina actors who would follow her, like Selma Hayek. Her Google tribute says, “Her talent at depicting a range of characters helped to expand the parts available to Mexican and other Latinx actresses in Hollywood today.”

According to Fast Company, the Google Doodle was created by artist Ana Ramirez and “includes an image of Jurado on a backdrop ‘inspired by the set of her film High Noon,’ as well as a rose to represent Jurado’s birthplace of Guadalajara, Mexico.” Guadalajara is called the city of roses.

Katy Jurado continued acting until she died at age 78 in 2002.

Ramirez is a Mexican illustrator for Pixar and worked on the amazing animated film that probably made you cry, Coco.

Hi! I made this Google doodle to honor Katy Jurado, an amazing Mexican actress that revolutionized cinema during the golden era. She was also the first latina/Mexican woman to be nominated for an Academy Award! #google #katyjurado more info on google ! Also, shout out to @snowpeasnow for her advice and art direction! ✨🇲🇽 #google #katyjurado #latinx